Valentino Rossi will start the #ValenciaGP from tenth, with Andrea Dovizioso 13th 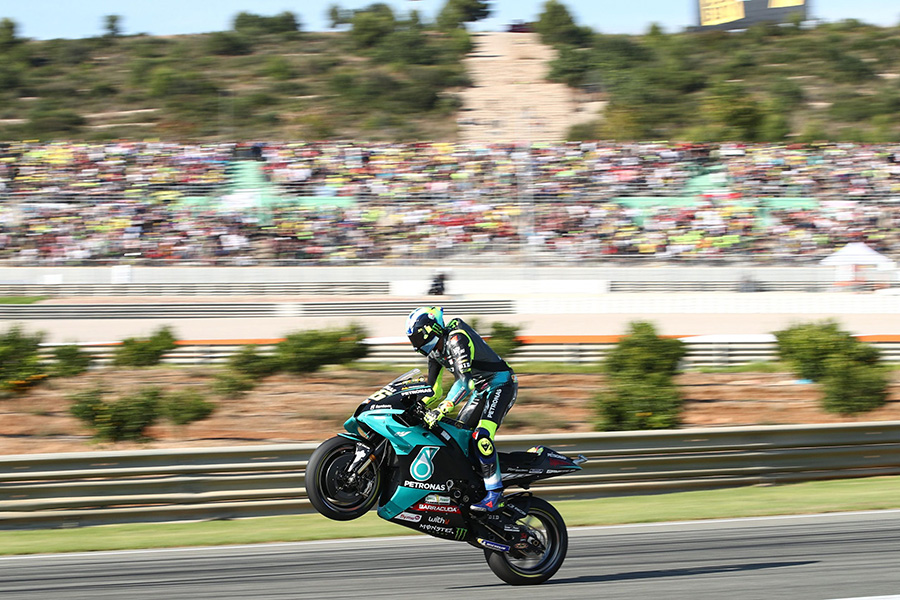 PETRONAS Yamaha Sepang Racing Team’s Valentino Rossi will start the final race of his career from the fourth row of the grid, after finishing Qualifying tenth, while MotoGP team-mate Andrea Dovizioso will start the Gran Premio de la Comunitat Valenciana from 13th.

Rossi gave his fans something to cheer about this morning, after posting a 1min 30.825secs lap in FP3 that saw him end the session tenth and secure a place in Q2. A mistake going into the first flying lap of Qualifying initially put him seventh, but he dropped to 11th after the first run. Three minutes before the end of the session, ‘Vale’ went seventh with a 1min 30.746secs lap but was denied the chance to improve further, due to two yellow flags on track. Holding the tenth fastest time at the end of Q2, Rossi will start his final race from the fourth row of the grid.

After completing a long-run at the beginning of FP3, Dovizioso was able to improve upon his best time set yesterday to 1min 31.377secs. Although only 0.848secs shy of the fastest rider, it put him 18th in FP3 and 19th overall. A strong performance in Q1 saw ‘Dovi’ challenge for a place in Q2 and record his best Qualifying result since making his MotoGP return. Completing his fastest lap in 1min 30.859secs, he ended the session third – just 0.071secs shy of a Q2 place – and will start tomorrow’s race from 13th.

It was a good Saturday and I am very happy about today because I felt good with the bike from this morning, and I was able to go straight to Q2. This was great and everything felt easier, like the tyres for example. I was able to do a good lap in Q2 and I will start my last MotoGP race in the top-ten, so it means that I am part of the fastest ten riders in the world. I am so proud of this for me, but also for my team. Now we need to improve in two or three places, try to ride well and have a good race tomorrow. I did have some help from ‘Pecco’ [Bagnaia], as I used his slipstream both this morning and afternoon, so I have to say thanks to him. To be honest, I was worried about this weekend because it is difficult to manage everything, but everything has been good and I have enjoyed the many surprises, like the big mural. So I want to say thank you to everybody, I’m enjoying it all.

I’m not too happy about the position today, but the speed is a bit better. I’m happy about that because from the first session yesterday we have been faster and have been closer to the quickest riders. This is what we need and I was only two tenths shy of the fastest Yamaha rider, which is really good. I’m happy and let’s see what happens tomorrow. I know that I am closer to the group of riders ahead of me in the times, but Valencia can be a strange race as you use the left side of the tyre a lot and it will affect the race more than at other circuits. I’m not sure what I will be able to achieve tomorrow, but my pace isn’t too bad. It will be important to gain positions at the start and then be consistent until the end.

#ValenciaGP, Valentino Rossi
Get All Our Latest News Sent Direct To Your Inbox
Join 30,253 other subscribers.
Follow on Social Media
Get the VROOM Podcast