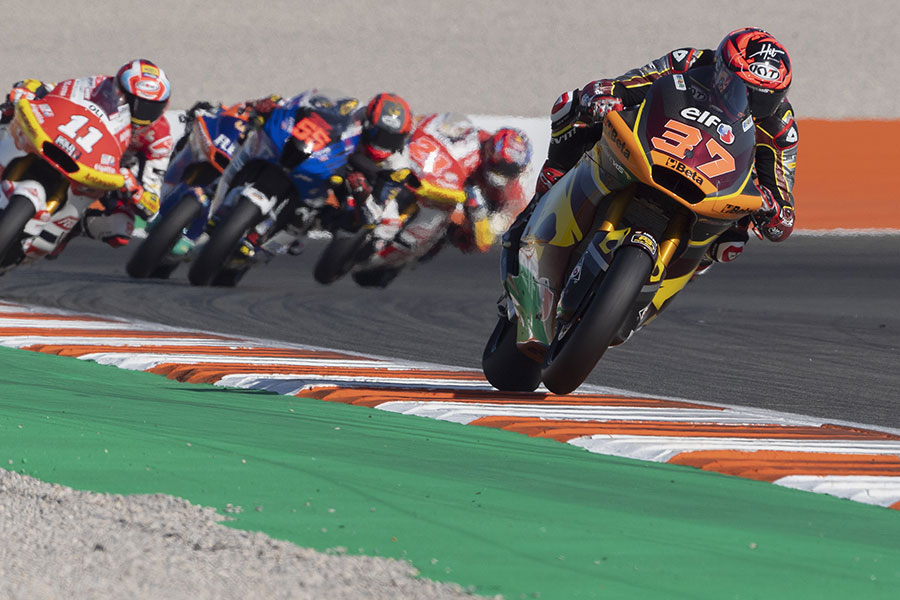 Augusto Fernandez capped an excellent weekend at the Valencia Grand Prix by taking his sixth podium finish of the year as Sam Lowes rode to a heroic seventh place.

The final Moto2 race of 2021 was red flagged after an incident at turn two and then re-run over a reduced distance of 16 laps.

Having placed inside the top three in every session this weekend, Augusto started the race brilliantly and led the field on the first lap.

In an exciting opening exchange, the 24-year old was involved in an exciting race-long fight for victory with Raul Fernandez and Fabio Di Giannantonio. In the end, he finished just 0.7s off the winner.

Augusto Fernandez
“It’s a shame not to get the win in this last race. All weekend I felt strong. But this shorter race we got after the red flag is maybe why we didn’t win because I was so strong in the last ten laps. During practice we saw that with used tyres I was stronger than the others. I was there and so close to the leaders but I didn’t have more. Anyway, I want to thank the team for this year. We did a very good second part of the season. We’ve been so strong and consistent and we have to be happy!”

A huge crash on Friday morning put Sam’s participation in the rest of the weekend in some doubt as he injured his right leg. But the Brit gritted his teeth in his trademark style to qualify tenth for the race on Saturday.

Lowes then produced a brilliant performance in the circumstances. After a steady start, he fought his way through from 10th in the early laps to finish seventh, just five seconds behind first place.

The twelfth top-seven finish of Lowes’ season confirmed his fourth place in the 2021 World Championship with 190 points.

Sam Lowes
“Honestly, it wasn’t too bad. Obviously with the red flags the race was shorter, which probably didn’t play into my hands. The pace was quite strong for everybody and I had qualified further back. I knew the first three or four laps I was struggling a bit more than after. I dropped back a bit but it was a real fun race. I was catching guys ahead and passing them. I’m relatively happy. I was really compromised after the crash in FP1. I felt a bit sore all weekend at a track which is my nemesis now. My target will be to come back here and get a good result in the future! The team did a great job with the bike, it was working well. I’m really happy to finish the race with a solid performance after the injury. It continued our nice end to the year. It gives us something to build on as we go into the winter to improve our weak points so we’re ready for 2022!”