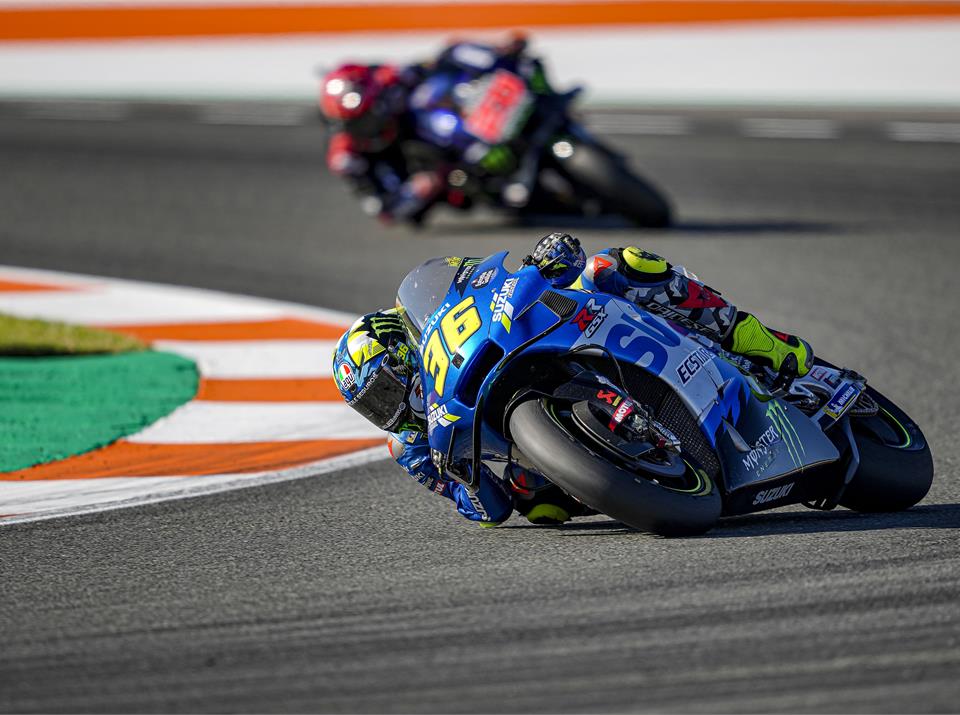 An unfamiliar atmosphere closed around the Ricardo Tormo in Valencia for the final MotoGP™ in 2021, as the paddock not only celebrated the end of a season but also the end of an era with the retirement of Valentino Rossi.

Both Team Suzuki Ecstar riders got off to a strong starts, especially Joan Mir who slotted straight into third place. Alex Rins dropped a couple of places to seventh before quickly fighting back to fifth. The pair then both proceeded to pass Jack Miller, putting their GSX-RRs in second and fourth by the start of Lap 3, and setting fastest laps in the process. Until Lap 11 both Mir and Rins continued to do battle with the Ducatis of Jorge Martin and Francesco Bagnaia, but at Turn 6 Rins was a little off-line and he low-sided out of the race.

With Suzuki’s hopes now resting on Mir’s shoulders, the Mallorcan was doing his best to keep the red bikes in sight, and for a few laps he closed the deficit. But as the race wore on, he had to instead focus on settling in position – he had a large gap behind him and despite wanting to fight for the podium he closed the race in a decent and sensible fourth place. As confirmed at the Algarve GP, Mir is third in the final Championship Standings. Suzuki also take third in the Constructors’ Championship and the Teams’ Championship.

“Well, I don’t know where to start; I’m really disappointed because I didn’t expect this feeling during the race; I thought today could be our day because I had strong pace all throughout the weekend, but when it came to the race it was different and I struggled with the front. In the end the most I could do was fourth. It’s not the way I wanted the race to go, I want to be fighting for the podium every time, and especially here. I’m third in the championship, which is something after a tricky season for us. Let’s look towards Jerez…”

“It has been an unlucky race for us here in Valencia, for sure it’s a big shame to end the season like this. Because I had the pace and I was running well, but I made a mistake. I was very slightly off-line and that’s what caused the crash, when that moment happened I knew I might crash – in the end it can be like that, but I’m disappointed. We’ll look at the data and then I’ll start to focus on the test, we’ll go to Jerez next week to try next year’s bike and our goal is to fight again in 2022.”