Pecco Bagnaia wins at #ValenciaGP, Miller in 3rd as Ducati lock out the podium 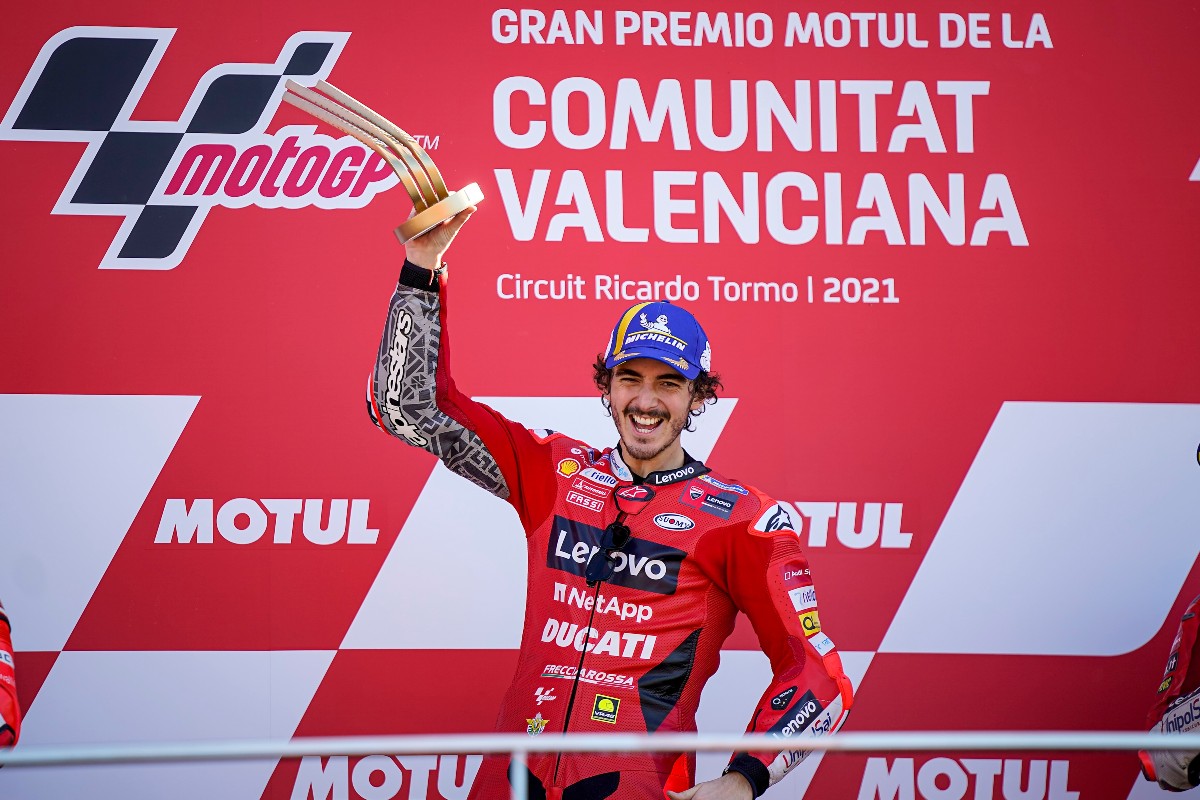 At the Gran Premio de la Comunitat Valenciana, the final Grand Prix of the 2021 MotoGP season held this afternoon at the Circuit Ricardo Tormo in Cheste (Spain), Ducati secured a podium lockout, as with Pecco Bagnaia’s win, the second place of Jorge Martin (Pramac Racing Team) and the third place of Jack Miller, three were the Desmosedici GP bikes that rolled into parc fermé in today’s race. For the Borgo Panigale manufacturer, which was crowned 2021 MotoGP Constructors’ World Champion just seven days ago in Portimão, this is another historic achievement that has never been reached before in the premier class.

Pecco Bagnaia scored another sensational win today, the fourth this season and the second consecutive after last week’s win in Portugal. As he was starting from second on the grid, the Italian rider was able to keep the same position after the start, behind Jorge Martin, who started from pole position. With 12 laps to go, Bagnaia made his decisive move on the fellow Ducati rider, taking the lead, where he remained until the chequered flag.

Behind Jorge Martin, in third, was Bagnaia’s team mate Jack Miller. As he departed from the third spot of the grid, the Australian rider dropped back into sixth place in the early stages of the race, but as soon as he found his rhythm, he could close the gap on his rivals and get back into the podium fight. Third, with nine laps to go, Miller got closer and closer to Martin but could not overtake him, eventually finishing the race in third place, confirming his fourth position in the Championship.

With both riders on the podium, the Ducati Lenovo Team secured the 2021 MotoGP Teams’ World Title. For the Italian team, this is the second title since the first one taken in 2007.

I’m thrilled with the victory today. To win wearing Valentino Rossi’s helmet was incredible and the best way to celebrate his last race. Today’s success was incredible, and now we know we are ready to fight for the riders’ title next year. During this season, we have improved the bike’s setup race after race, and at the end of 2021, the Desmosedici GP has become very strong, as well as its riders. We have a very good base for next year, and I hope to start as we finish. We have gained a lot of experience, and we have grown a lot! The team is unbelievable, and the atmosphere inside the garage is amazing! I’m really happy, and I thank Ducati for all this.

I’m delighted, even though I would have liked to have achieved something more today. Unfortunately, I lost some time at the start and had to recover to get back in the fight for the podium. It was a good race, and I had a lot of fun. Valencia is a track I really like, and it’s nice to finish the season like this. It’s the first time three Ducatis have finished on the podium, and it’s great to be part of this important achievement. I’m sure our bike will be even better next year, so I’m looking forward to the 2022 season and trying to fight for the riders’ title. This year we finish fourth, and it is my best result ever in the MotoGP Championship, so I hope to do even better next year.

With the 2021 season over, the Ducati Lenovo Team riders will only have a few days off as on 18th and 19th November, they will already be back on track at the Circuit de Jerez – Angel Nieto to face the first two days of winter testing in preparation for the 2022 season.