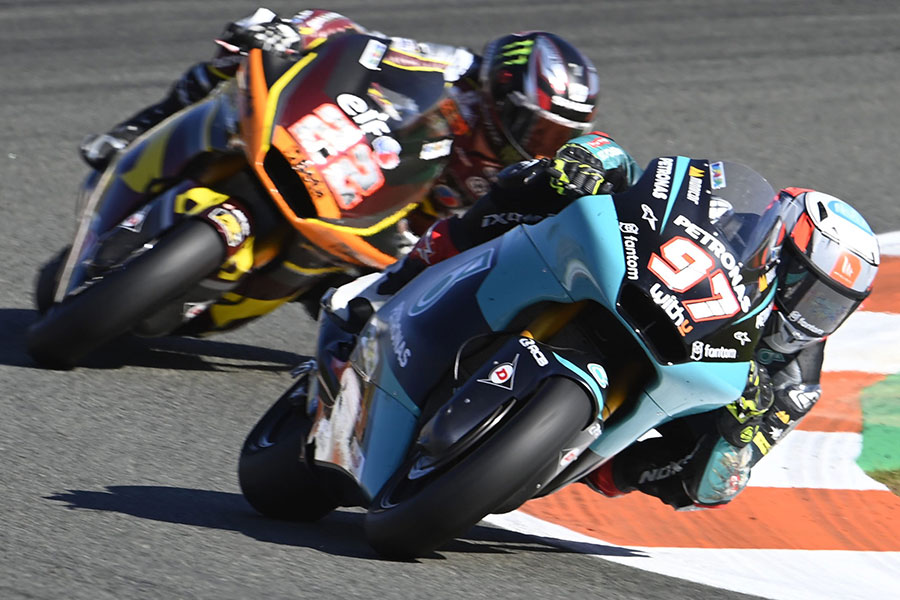 PETRONAS Sprinta Racing’s final Moto2 race was a shortened affair, after an oil spill on the first lap, where Xavi Vierge signed off with sixth in front of his home fans. Team-mate Jake Dixon ended the Gran Premio de la Comunitat Valenciana 16th.

After a Turn 2 crash on the opening lap of the initial Moto2 race, Vierge had a better start to the shortened 16-lap encounter. Making his way from 12th to eighth on the opening lap, the Spaniard was soon up to sixth and enjoyed a fierce battle with those around him. With five laps to go, Xavi made his way through into fifth but had to fight to keep it in the closing stages. Unfortunately he couldn’t hold onto it and ended his final Moto2 race sixth.

Team-mate Dixon also had a good start to the second race, starting Lap 2 in 16th having lined up 23rd on the grid. Battling hard with those around him, the Brit momentarily lost two places, but soon gained one back to settle into a good rhythm in 17th. Finding it difficult to make progress through the field and close down the gap to those ahead, Jake ultimately crossed the Valencia finish line 16th.

At the end of the ValenciaGP, the final race for PETRONAS Sprinta Racing, Vierge has a total of 93 points and Dixon 30, which places them 11th and 20th respectively in the 2021 Moto2 World Championship standings.

Today luck was with us. In the first race there was an incident with another rider and I crashed, but luckily we had the red flag for oil and the team worked so hard to repair the bike in time for us to start the second race. We were able to demonstrate the pace that we’ve had all weekend and make a good comeback to sixth position. It is good to finish the season with a good result. I want to thank my team and the sponsors for making it all possible.

It’s been a difficult weekend to be fair and I’m not sure why but I’ve had zero grip. No matter what the team tried it just didn’t seem to make any difference. It felt like every time I tried to get on throttle in corners I couldn’t turn like I wanted to. Coming from 23rd to finish 16th was the best that I could do in today’s race. It’s just been a struggle this weekend. Looking back at this season, I’ve come back from a broken wrist and it’s taken a year to recover. I haven’t felt great on the bike at times and it’s been difficult, but overall we’ve had our good times and thanks to the team for the past two years.