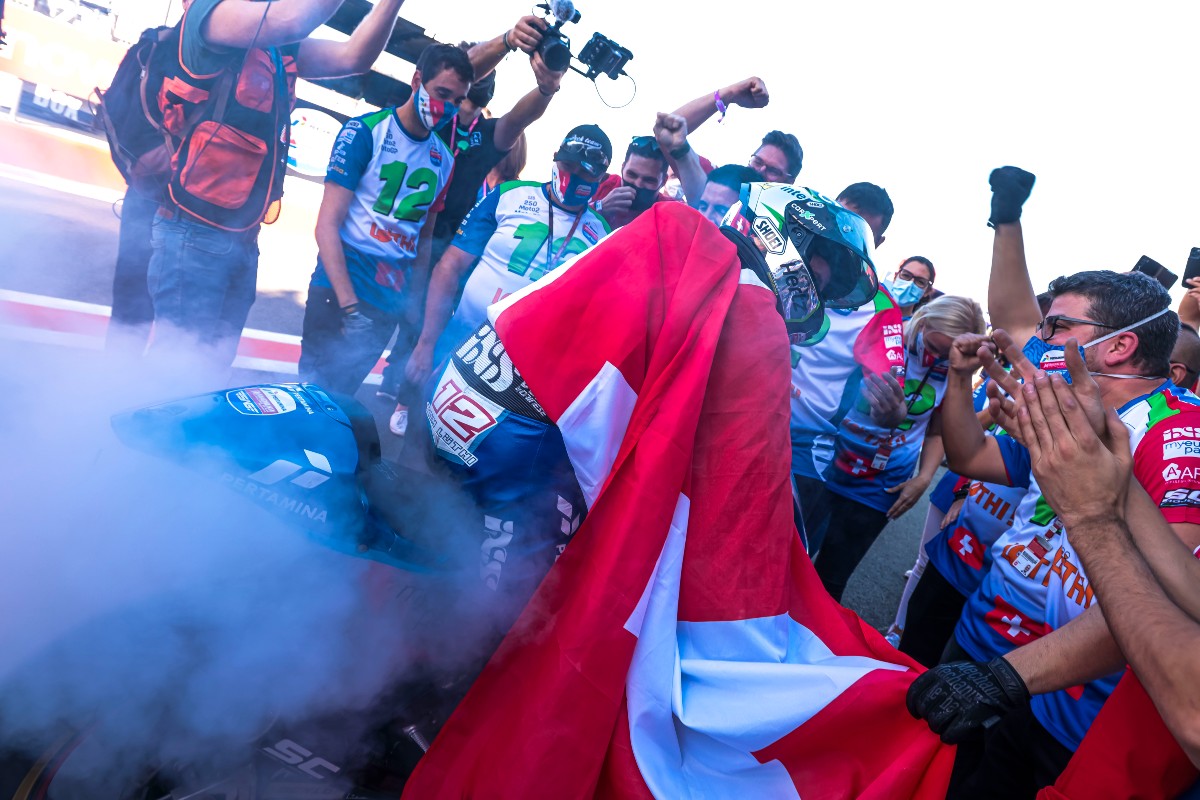 Tom Lüthi held the position in the opening laps and achieved a good rhythm from the start. The Swiss rider fought to stay in the top ten, although in the second part of the race he lost positions until crossing the finish line in twelfth place. This result is one of the best achieved by the Swiss rider this season, coinciding with his last race with Pertamina Mandalika SAG Team and also in competition.

Bo Bendsneyder, starting from twenty-second, lost places at the start. The Dutch rode alone after the good feelings achieved during the day on Saturday. Bendsneyder closed the season crossing the finish line in 25th position.

Dimas Ekky Pratama, who was competing this weekend at the Valencian Community Grand Prix as a wildcard, started the race from twenty-ninth place. The Indonesian rider suffered a crash in the opening laps that prevented him from finishing the race.

With this Grand Prix the 2021 Moto2 season concludes. From Pertamina Mandalika SAG Team we want to thank all the support that our sponsors have given us, since without them our participation in the Championship would not be possible.

It’s been a great weekend overall, great race, great finish. I just want to thank everybody, especially all the team, all the sponsors that made this incredible time for me. Also this weekend was very special. The team prepared the bike with an amazing livery and a great helmet. It was a big surprise for me, they are a really cool staff. It was the last one and I’m really thankful that I could enjoy this time with the team and with all of you.

It’s been a really difficult race but the most important is what we showed during the season. There were many ups and there was also some downs unfortunately. I really want to thank the team because they did an amazing job during the season. I want to congratulate Tom for his amazing career. I hope he has a nice future. I’m looking forward for the next year and to be stronger than this year.

Today before the red flag I tried to make a good start and some riders crashed and I could avoid them. In the second race I tried to stay in the group but I wanted to push and I lost the rear grip and I had a high side in turn 2. The crash wasn’t the problem but the high side caused me a lot of pain in the leg. The medical team checked it and it was just the hit. Now I have to concentrate on the next weekend. Tomorrow we will rest and we will be ready for the last trace with the team in the FIM CEV Repsol. Thank you much for this ooportunity. I hope Piotr will be better soon.

#ValenciaGP
Get All Our Latest News Sent Direct To Your Inbox
Join 30,253 other subscribers.
Follow on Social Media
Get the VROOM Podcast
Download our Vroom.GP App