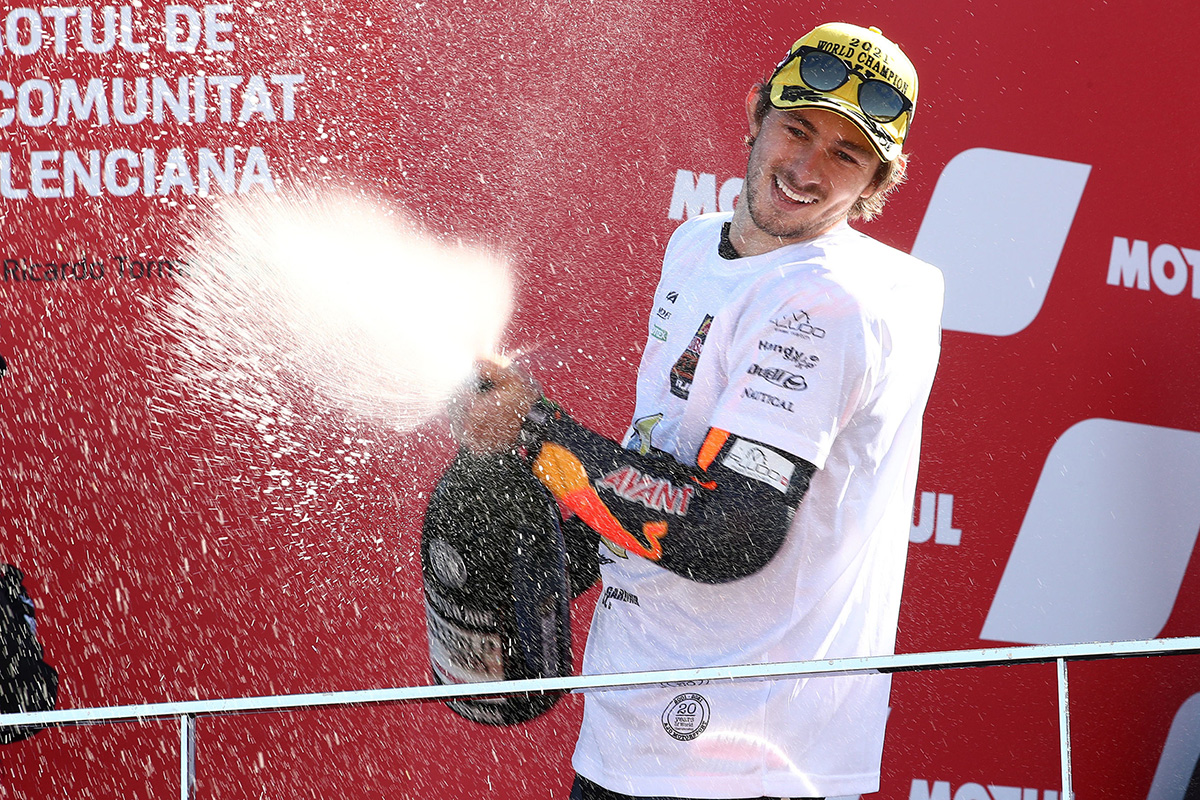 The Red Bull KTM Ajo finished an excellent season with a race victory and the Moto2 title at the Valencia Grand Prix. Remy Gardner rode an intelligent contest to place tenth, becoming the new Moto2 World Champion. Raul Fernandez broke the record for most wins for a rookie with his eighth triumph of the 2021 campaign.

Remy Gardner remained calm after the race was stopped because of the red flag that forced the Australian rider to return to the box. In the second start, the Red Bull KTM Ajo Moto2 talent took off cleanly from the third row, placing him ninth at Turn 1. Finally, Gardner clinched the Moto2 World Championship with a measured performance at the Ricardo Tormo Circuit today, prioritising avoiding unnecessary risks and crossing the line in tenth position.

Fernandez, who started fifth on the grid, passed two riders to make his way into the podium positions, before a first lap crash caused a red flag and shortened the race to 16 laps. After the restart, he remained in second place, waiting for the right moment to overtake, and did so with four laps to go. With this result, the Red Bull KTM Ajo talent becomes the rookie with the most victories in Moto2 history, surpassing the record set by Marc Marquez in 2011.

Red Bull KTM Ajo’s 2021 comes to an end with Gardner as Moto2 World Champion, with 311 points. Fernandez concludes the year in second, with 307. They will now both move up to MotoGP for 2022, as part of the KTM GP Academy program.

REMY GARDNER
“It was a tough contest mentally. I tried not to make mistakes and to ride as cleanly as possible. It was the most difficult race of my life, especially on the last 5 laps, where I didn’t want to think too much about the championship and just wanted to enjoy myself. I still can’t believe it happened. It has been a spectacular and very beautiful season, for me and for the fans. Raul [Fernandez] and I have been one step ahead of the rest, and you just have to see the number of times we have both been on the podium. He didn’t make it easy for me and he fought very hard until the end; achieving so many victories as a rookie is incredible. My experience has helped me and perseverance has been key to becoming champion.”

RAUL FERNANDEZ
“I tried everything. I only have words of thanks for the team, as we have worked like never before. In the end, we were only four points away from winning the title; we were very close. Although winning the title was a difficult task for us, I tried until the end and I gave my all. I’m very happy for Remy Gardner and the team, who have worked hard. Our season has also been incredible. I have to thank my team, my family and all the people who have come to Valencia today. We’re going to have a great time now, and then it’s time to switch off.”