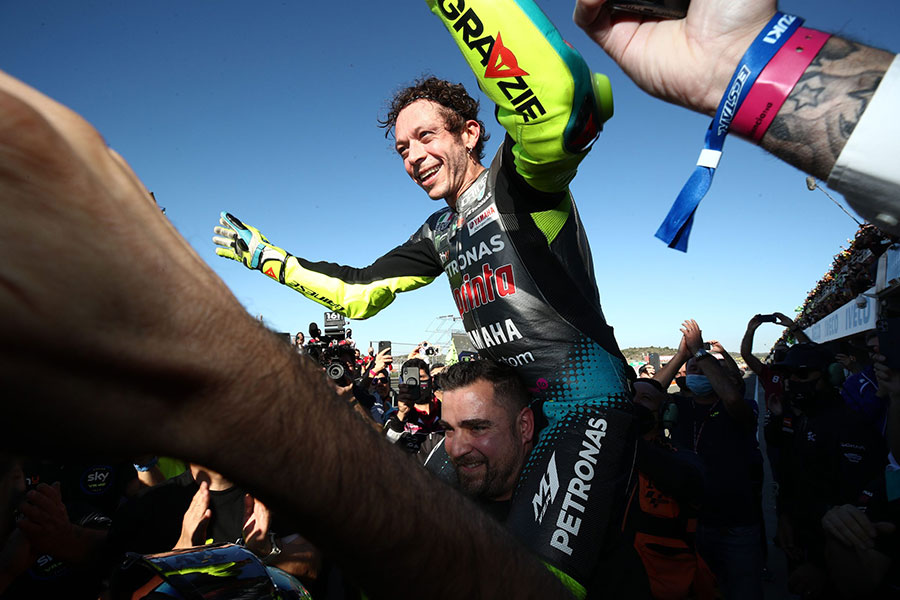 It was the end of an era today at the Gran Premio de la Comunitat Valenciana, with Valentino Rossi ending the final MotoGP race of his career tenth. Team-mate Andrea Dovizioso made it a double points finish for PETRONAS Yamaha Sepang Racing Team in their final race, crossing the finish line 12th.

Rossi had a good start to his final MotoGP race, claiming two places in the opening corner to go eighth. Dropping back to tenth on lap 4, the Italian demonstrated good speed and pace throughout the season finale. Although he wasn’t able to close the gap to those in front, ‘Vale’ successfully defended his position and crossed the finish line for the final time tenth – bringing his amazing 26 years of Grand Prix racing to its conclusion.

Team-mate Dovizioso, who started 13th, also gained two places in the opening corners. The Italian had some early on-track battles, which pushed him down to 14th on the fifth lap. Mounting a recovery, he made it through to 12th before the midpoint of the race. With a gap to the riders ahead, ‘Dovi’ worked hard to reduce the deficit but ultimately wasn’t quite able to close up to those in front and crossed the line 12th.

The ValenciaGP signals the end of PETRONAS Yamaha Sepang Racing Team’s three years in the MotoGP championship, where they achieved 12 pole positions, 16 podium finishes and 6 wins. The Malaysian squad were also Independent Team Champions in 2019 and 2020.

I didn’t expect that it could be a weekend like this. I was very worried for this weekend because I didn’t know how I felt and there was a lot of pressure with many things to do. It was fantastic, I received a lot of positive energy from all the people in the paddock and I had a lot of great surprises: from seeing all my bikes on Thursday, to all the VR46 Academy riders with my helmets today. I’m also happy because I was able to be strong in both Qualifying yesterday and in the race today, finishing in the top-ten. I enjoyed it a lot and it was the best way to finish. I am in the top ten best riders in the world and it means everything, because this result will never change. I also enjoyed the celebrations after the race. It was a long career and I want to say thanks to everybody.

We were much closer than we have been in other races today, so I’m happy to finish the season with that speed. We also worked well to improve the bike under braking, which meant I could take different lines. It was good for me that I could follow ‘Vale’ [Rossi] and Franco [Morbidelli] to learn how they ride the Yamaha, as they are very experienced with it. I’m very happy with today and it was a good way to finish the season.

To be a team-mate of Rossi was strange, as I have always been in different teams to him, but it has been enjoyable. I tried to beat him but he was very strong and he always has something more to give in a race. It has been really nice to share the box with him at his final round and I feel lucky to have been part of it.

#GrazieVale, #ValenciaGP, Valentino Rossi
Get All Our Latest News Sent Direct To Your Inbox
Join 30,253 other subscribers.
Follow on Social Media
Get the VROOM Podcast
Download our Vroom.GP App