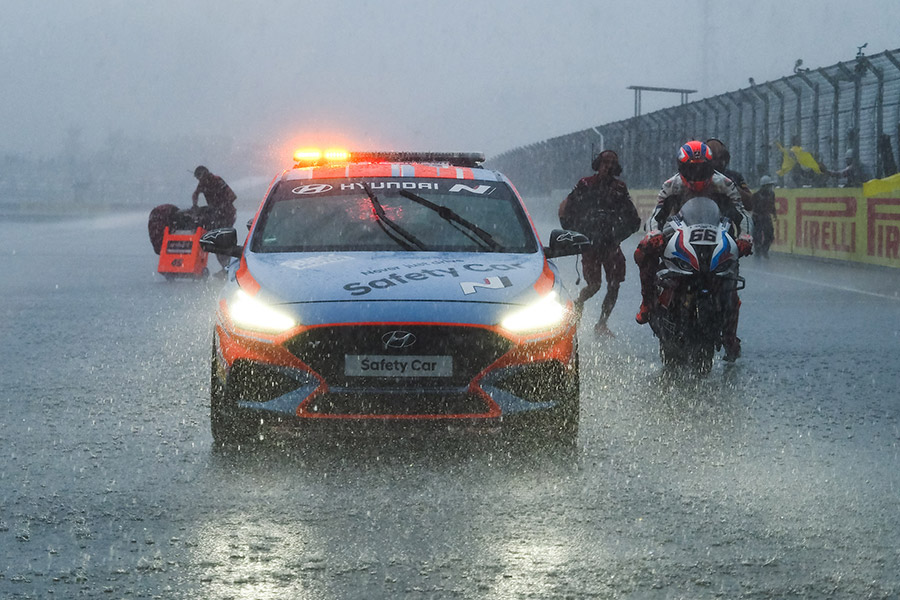 Following a heavy thunderstorm hitting the Pertamina Mandalika Circuit in the afternoon on the WorldSBK grid for Race 1, the start was delayed. Weather conditions continued to deteriorate, forcing Race 1 to be rescheduled for 11:00 AM on Sunday morning, with riders’ safety remaining paramount.

Sunday’s new schedule will include WorldSBK Race 1 at 11:00 AM LT (GMT +8) and WorldSBK Race 2 will start regularly at 15:00 LT (GMT +2.00). Both races will be over the course of 21 laps. For the Idemitsu Asia Talent Cup (IATC), there will be one race on Sunday: Race 3. Unfortunately, this means the cancellation of the Tissot Superpole Race and Saturday’s second IATC race.

The final Tissot Superpole session of the 2021 MOTUL FIM Superbike World Championship kicked off at the Pertamina Mandalika International Street Circuit in Indonesia, with it proving to be a vital session for the Championship contenders, needing to secure strong grid spots. Moments before the session got underway, spots of rain began falling in the paddock area, adding to the complexity of finding a fast lap time around the all-new track. Starting from a third pole of the year, Championship leader Toprak Razgatlioglu (Pata Yamaha with Brixx WorldSBK) heads title rival Jonathan Rea (Kawasaki Racing Team WorldSBK), both going from first and second on the grid respectively.

Blinking first, Toprak Razgatlioglu was right at the front on his first flying lap, whilst Championship rival Jonathan Rea took second place after his first attempt. Scott Redding (Aruba.it Racing – Ducati) was third whilst Andrea Locatelli (Pata Yamaha with Brixx WorldSBK) was up in fourth ahead of Axel Bassani (Motocorsa Racing). The first run saw most riders head out on the Q tyre, eager to get a banker lap in with the spots of rain in the air. Garrett Gerloff (GRT Yamaha WorldSBK Team) and Leandro Mercado (MIE Racing Honda Team) were notable outliers as they used the SCX tyre but were both inside the top ten after their initial efforts.

With just over six minutes to go, everyone headed back out to try and go for a quick lap time, with Jonathan Rea leading the field around the 4.3km Pertamina Mandalika Circuit. The reigning six-time World Champion meant business as he put in a storming lap of a 1’33.201, the fastest lap we’d seen of the weekend. Scott Redding was next up, he took second provisionally but all eyes were on Razgatlioglu once again, with the Turkish rider storming to pole, with a 1’32.877 seeing him become the first and only rider to get into the 1’32 bracket. With Andrea Dosoli and Kenan Sofuoglu watching on and applauding accordingly, Razgatlioglu took pole ahead of Rea and Redding. The same three it has been all year at the forefront of the grid.

#IDNWorldSBK
Get All Our Latest News Sent Direct To Your Inbox
Join 30,271 other subscribers.
Follow on Social Media
Get the VROOM Podcast