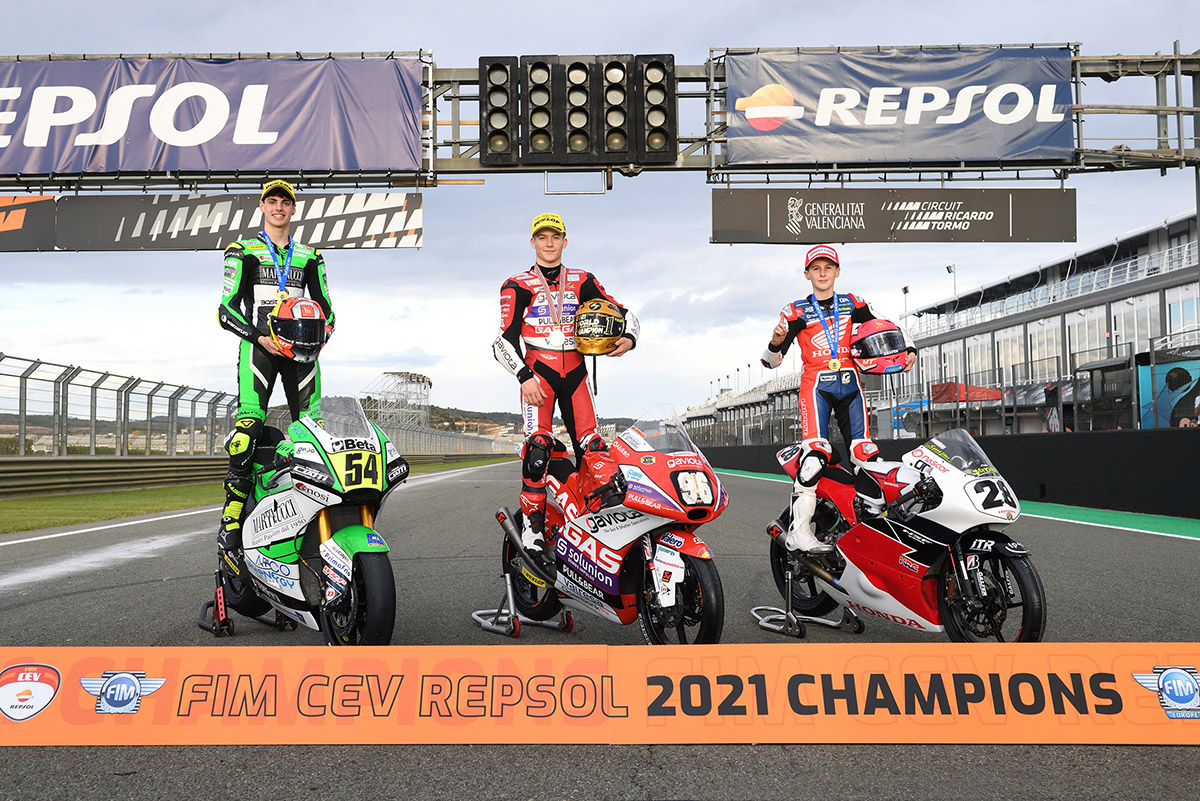 In the FIM Moto3™ JWCh, Holgado took the title in Race 1 after finishing ninth, with closest rival David Muñoz (Avatel – Cardoso Racing) unable to make a comeback from a pitlane start. With Muñoz 19th and Ivan Ortola (Team MTA) third, Holgado was crowned Champion on Sunday morning in a race that saw Joel Kelso (AGR Team) take a sensational win from the back row of the grid. David Alonso (Aspar Team) joined Kelso and Ortola on the Race 1 podium. In Race 2, the shackles were off. Holgado grabbed the holeshot and was in the lead group throughout, with the race ultimately coming down to the final lap. Ortola led out the final corner, but Holgado snatched victory to end his title-winning campaign on top, with Ortola and David Salvador (TM Factory Racing) completing the rostrum.

Race 1 in the Hawkers ETC saw Martinez show no signs of Championship leading pressure. The Spaniard fended off Jacob Roulstone (Leopard Impala Junior) to win, putting him 20 points clear of Xabi Zurutuza and fellow Cuna de Campeones rider Adrian Cruces heading into the final showdown. Despite a nervy race – which saw Martinez tackle a Long Lap Penalty and a drop one position penalty for exceeding track limits on the last lap – Martinez’ sixth place handed him the 2021 title, with Zurutuza and Cruces colliding and running into the gravel at Turn 12 on the last lap. Alvaro Carpe (MT-Foundation 77), after a crash in Race 1, notched up his second win of the season in Race 2, as Brian Uriarte (Team Estrella Galicia 0,0) and Roulstone made up the last podium of 2021.

There was only one race for the Moto2™ ECh riders to contend with, and Alonzo Lopez (Boscoscuro Team Ciatti) won for the second time this season in a red-flagged encounter. The race was stopped five laps from the end after Leon Orgis’ (Avintia Esponsorama Junior) machine spilt oil on the start/finish straight. This handed race leader Lopez victory over second place Aldeguer, with Lukas Tulovic (Liqui Moly Intact SIC Racing) picking up P3 as the top three in the overall standings celebrate the final podium of the season together.

So that’s it for FIM CEV Repsol action – both in 2021 and for good. Next year, a new era begins in the form of the FIM JuniorGP.

valencia
Get All Our Latest News Sent Direct To Your Inbox
Join 30,271 other subscribers.
Follow on Social Media
Get the VROOM Podcast