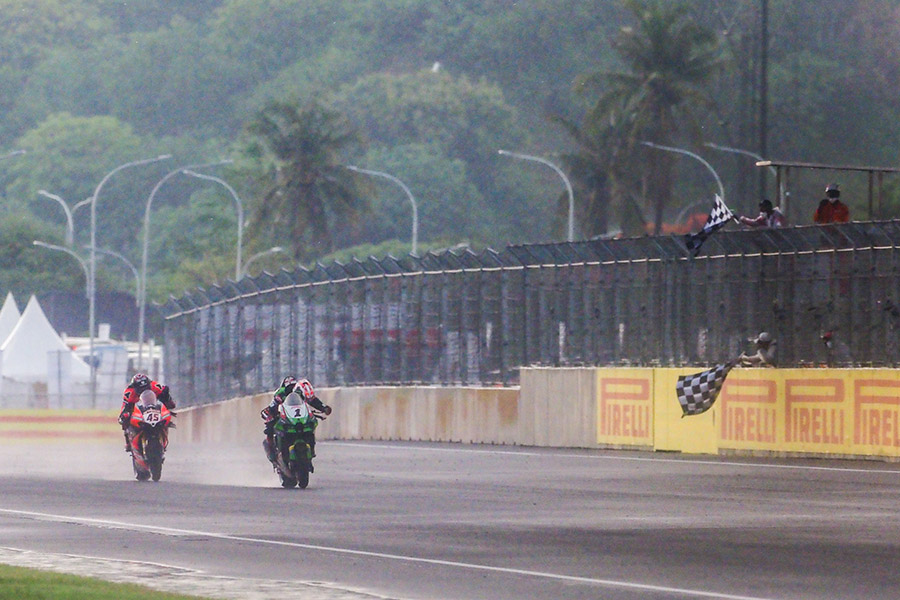 A shortened Race 2 for the MOTUL FIM Superbike World Championship at the Pertamina Mandalika International Street Circuit provided plenty of drama in wet conditions, with a delay to the start due to weather conditions meaning the race was run to a reduced 12 laps, down from the originally planned 21 laps. Jonathan Rea (Kawasaki Racing Team WorldSBK) doubled up on victories in Indonesia as he battled it out with Scott Redding (Aruba.it Racing – Ducati) for victory.

As the race got underway, newly crowned Champion Toprak Razgatligolu (Pata Yamaha with Brixx WorldSBK) kept the lead from the race, with the lead five quickly looking to break away. Jonathan Rea (Kawasaki Racing Team WorldSBK) and Scott Redding (Aruba.it Racing – Ducati) were able to break away with relentless pace as they battled it out for Race 2 honours.

Rea and Redding both exchanged first place as they looked to end the season on the top step of the rostrum, including a superb move around the outside of the Ducati rider on Lap 7, although Redding was able to respond. As the final lap started, Redding was able to make a move into Turn 1 before Rea responded into Turn 10. Heading into Turn 16, Redding went up the inside of Rea but ran wide, allowing Rea to move back into the lead of the race and claim his second victory at Mandalika for the 215th podium of his career. Redding’s second place earnt Ducati their 660th race on the podium.

The 2021 FIM Supersport World Championship campaign came to a thrilling conclusion at the Pertamina Mandalika International Street Circuit as Race 2 was decided at the final corner after an incredible 19-lap battle, with Jules Cluzel (GMT94 Yamaha) taking his fourth win in the final three rounds. The top four were separated by just 0.714s at the end of Race 2 for the Pirelli Indonesian Round.

Federico Caricasulo (VFT Racing) was a fast starter as he moved immediately into the lead of the race with a move into Turn 1, with Turkish star Can Öncü (Kawasaki Puccetti Racing) also making progress as the lights went out for the 19-lap race, with Öncü taking the lead on the opening lap before Caricasulo started fighting back. The Italian was able to close the gap to Öncü before making his move at Turn 10 on Lap 9 to re-gain the lead of the race.

Despite taking the lead of the race, the Italian was unable to pull a gap to Öncü, allowing Niki Tuuli (MV Agusta Corse Clienti) to close the gap, with the Finnish rider moving from third to first in one move at Turn 16 as he ducked under both Öncü and Caricasulo, while Öncü passed Caricasulo to move into second place. After taking the lead of the race, Tuuli looked to pull a gap to the rest of the field, setting a new lap record on Lap 11 with a 1’36.849s. On Lap 13, Caricasulo re-passed Öncü into Turn 10 to move back into second place and started chasing down race leader Tuuli. A lap after that move, Öncü dropped to the back of the six-strong lead group after a moment exiting the final corner, re-joining in sixth.

As the race entered its closing stages, Cluzel completed his charge to the front of the field after starting from 13th on the grid, as he made his move at Turn 10 on the penultimate lap of the race. On the final lap, at Turn 16, Cluzel looked to respond after losing out to Aegerter earlier in the lap, making a move at Turn 15 but running wide at Turn 16, allowing Dominique Aegerter (Ten Kate Racing Yamaha) and Caricasulo back through. At the final corner, Cluzel swept past Aegerter and Caricasulo as they battled it out to claim his fourth victory in six races while Tuuli was able to take advantage of that fight to sweep back into second having run wide and losing time and positions earlier in the season. Aegerter claimed third place with Caricasulo just finishing off the podium. Tuuli’s second place means MV Agusta now have 50th podium placings in WorldSSP, while Ten Kate Racing Yamaha were able to claim the 2021 Teams’ Championship.

#IDNWorldSBK
Get All Our Latest News Sent Direct To Your Inbox
Join 30,242 other subscribers.
Follow on Social Media
Get the VROOM Podcast