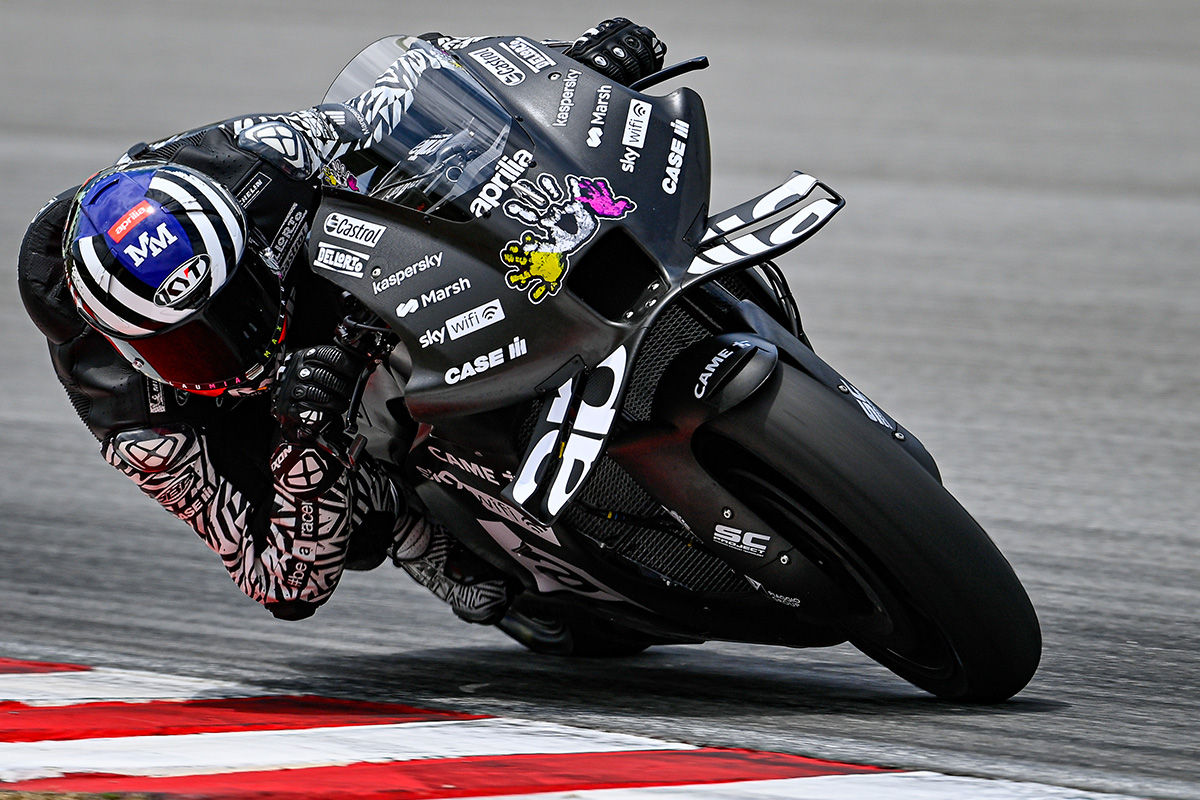 2022 pre-season testing couldn’t have started any better for Aprilia Racing. Aleix Espargaro put in a 1:58.371 to take the honours on Day 1 at the Sepang Test, and then teammate Maverick Viñales shot up into second, just 0.013s off his compatriot. Alex Rins (Team Suzuki Ecstar) was third quickest on a busy opening day in Malaysia, with plenty of updated parts making an appearance.

APRILIA
During the Shakedown Test, Aprilia Racing Technical Director Romano Albesiano explained how the 2022 RS-GP is like “moving a building two metres away. It’s not a big change, but you have to move everything.” Basically, the bike is a completely new machine, albeit similar to the one we saw return to fighting at the front in 2021. And early indications suggest that both Aleix Espargaro and Viñales are enjoying themselves, with Viñales especially enjoying that the new RS-GP is narrower.

On the ninth lap of the day, Aleix Espargaro slammed in his 1:58.371, one of the fastest-ever laps of Sepang International Circuit on two wheels, with Viñales’ best lap just 0.013 in arrears coming at the end of the day as the Noale factory bookended the action with a show of force each. 98 laps were completed between the pair.

SUZUKI
For Suzuki, the day started well and ended well on the timesheets as Rins and Team Suzuki Ecstar teammate Joan Mir were joined on duty by test rider Sylvain Guintoli. Between them, the three put in over 180 laps. Rins crashed early on at Turn 9, rider ok, but the number 42 ended the day in third overall – starting there, dropping down a couple of places and then catapulting himself back ahead of Enea Bastianini (Gresini MotoGP Team).

Mir joined Rins in the top five early on before the 2020 Champion dropped down to seventh on the timesheets. With Suzuki looking for a little more power, the new engine has already been put through a good few paces and that work continued for the Hamamatsu factory. The ride height device – debuted half way through 2021 – is a key focus too, and the GSX-RR was spotted with the carbon reinforced chassis already seen on track during testing at Misano and Jerez last year.

DUCATI
At Ducati, it was a more muted day on the timesheets for some of the more established riders, but that could speak to a sense of serenity in not yet going for a time attack. The fastest Borgo Panigale machine was Bastianini as he settles into life at Gresini and on the GP21, the ‘Beast’ shooting straight out the blocks into second for much of the day with a 1:58.638. He was fourth by the end of play with that laptime, with Johann Zarco (Pramac Racing) for close company in fifth.

The next Ducati on the timesheets was a stunning performance from Marco Bezzecchi (Mooney VR46 Racing Team) in P10. The Italian’s 1:59.468 was no mean feat and sees him end Day 1 as the fastest rookie.

For those testing more than settling in, focus remained on the engine and the interesting exhaust evolutions brought by the Borgo Panigale factory. Francesco Bagnaia (Ducati Lenovo Team) and teammate Jack Miller had the new tail exhaust on both machines, as did Zarco. Pramac Racing’s Jorge Martin had one to try too, and he was the fastest of the four in P17 just ahead of Mooney VR46 Racing Team’s Luca Marini. Bagnaia was P19 ahead of Fabio Di Giannantonio (Gresini Racing MotoGP) as the rookie got back out… and Miller ended the day in P22. Ducati time attacks will be a huge point of interest on Day 2!

YAMAHA
The biggest talking point regarding the 2022 Yamaha YZR-M1 is the engine. We know the Iwata factory are trying to squeeze some more top speed from their package, so five days of pre-season testing are vital for them to see if work over the winter has paid off. Elsewhere, though, there’s plenty of external updates to have a look at.

There’s some new front aero, similar to the one seen on the Aprilia, while Yamaha have also been testing an additional set of wings that sit further down on the side fairings. Knee supports have been spotted, too, as have some silver wheels. These were seen on Ducatis at some Grands Prix in 2021, and it is aimed at keeping the tyre a bit cooler.

Reigning World Champion Fabio Quartararo (Monster Energy Yamaha MotoGP) was the leading Yamaha rider on Day 1 with a 1:59.002, the history-making Frenchman 0.6s from Aleix Espargaro’s effort. Test Rider Cal Crutchlow was back on track and completed 47 laps. A best of a 1:59.558 put the British rider 11th on the timesheets.

HONDA
The main talking point heading into the Sepang Test was the return of eight-time World Champion Marc Marquez (Repsol Honda Team). After recovering from a second bout of diplopia, the number 93 was back on an RC213V for the first time since October 2021 and headed out on last year’s bike first to reacquaint himself with MotoGP™. It wasn’t long before Marc Marquez was out on Honda’s 2022 package though, and despite a small crash at Turn 9 in the morning, followed by another small tumble towards the end of the day at Turn 15, all seemed well with the Spaniard. A 1:59.287 and 62 laps put Marc Marquez in eighth place on the timesheets, a solid day at the office.

Factory teammate Pol Espargaro (Repsol Honda Team) got straight down to business with the 2022 model, the latest spec Honda that has been updated from the Jerez Test, with one of Takaaki Nakagami’s (LCR Honda Idemitsu) machines running a never-before-seen chassis. Alex Marquez (LCR Honda Castrol) was lapping on the 2022 Honda as all four riders put in the work on Day 1.

The tail unit, the exhaust that runs past the tail unit, some aero, and a new engine were also on the checklist for the Japanese giants, as well as more than four chassis. It’s Honda’s biggest change within the same set of rules in MotoGP™ and the early signs are very much positive. Pol Espargaro ended the day in ninth, less than a tenth off Marc Marquez, and Nakagami and Alex Marquez ventured into the 1:59s.

KTM
Brad Binder led the Red Bull KTM Factory Racing ranks on Day 1. The South African ended the day in P14, with teammate Miguel Oliveira in P16 – both within the high 1:59s. The two factory riders took over from the test line-up of Mika Kallio and MotoGP™ Legend Dani Pedrosa as KTM were focused on their new engine and a different air intake, as well as different aero. Both Binder and Oliveira crashed, both ok.

Aside from the technical novelties – and the arrival of new Red Bull KTM Factory Racing Team Manager Francesco Guidotti – there’s an all-new line-up at Tech 3 KTM Factory Racing too. And the fastest KTM on Day 1 was in fact Tech 3’s rookie sensation Raul Fernandez. He put in a 1:59.682 to end the day in P13. Moto2™ World Champion Remy Gardner, fighting through the pain barrier after breaking his wrist in training, put in a 2:00.470 and managed 60 laps.

#SepangTest
Get All Our Latest News Sent Direct To Your Inbox
Join 30,246 other subscribers.
Follow on Social Media
Get the VROOM Podcast