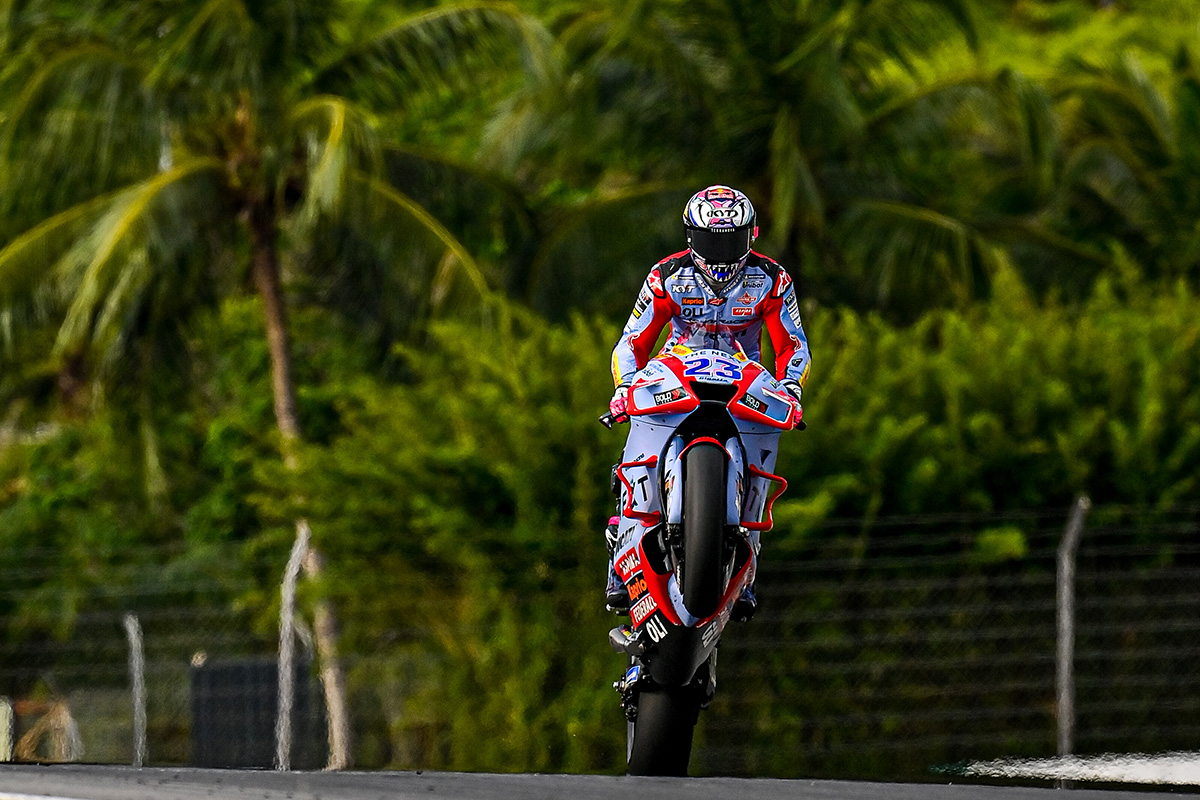 The two-day Official MotoGP™ Sepang Test concluded on Sunday, and with a new searing fastest ever lap of the venue. Enea Bastianini (Gresini Racing MotoGP™), on only his second day riding a MotoGP™ bike at Sepang International Circuit, set a scorching 1:58.131 to beat Day 1’s quickest rider Aleix Espargaro (Aprilia Racing) by just 0.026 – and the two were both under the previous fastest lap of the track. We saw 20 riders within 1.066 by the end of play, with Jorge Martin (Pramac Racing) third quickest and only 0.112 off the top.

However, heavy afternoon rain did disrupt the action. Some riders ventured out in the wet conditions, but as expected, the timing screens remained unchanged from the early flurry of rapid laps.

DUCATI
Bastianini was the top Ducati on Day 2 – on the GP21 – as the ‘Beast’ hit back to topple Aprilia’s Saturday dominance. Martin, the rider who duelled and beat Bastianini in the fight for Rookie of the Year last season, leapt up the timesheets too – the Spaniard slotting into third and just 0.112 off the top. Francesco Bagnaia (Ducati Lenovo Team) made a big move up the timesheets into sixth on Sunday, 0.134 off Bastianini, with Johann Zarco (Pramac Racing) in ninth. Jack Miller (Ducati Lenovo Team) was P14.

On rookie watch, Marco Bezzecchi (Mooney VR46 Racing Team) came out on top once again, despite a crash. Just over half a second off the fastest ever lap of the track is a feat in itself, and the number 72 ends the test in P16. Teammate Luca Marini also had a good day and was P11 by the end of play. Fabio Di Giannantonio (Gresini Racing MotoGP™) was P20, the number 49 having missed two days of the Shakedown but still able to get within 1.066 of his teammate’s record-breaker at the top.

MotoGP™ pitlane reporter Simon Crafar reported a concern shared with him by Ducati Lenovo Team Manager Davide Tardozzi: the throttle connection, and rideability. The new engine has made gains in top speed and at Jerez the feedback was all positive, but Sepang has shown there remains margin for improvement. Martin, as he begins his sophomore season, framed that more in terms of still having a big margin to improve the new bike – so pausing the ‘Jaws’ music may prove premature.

The GP22 machines appear to have settled with the new aero and updated air intake, and the updated ride-height device continues to make a splash as Borgo Panigale  push the boundaries of innovation.

APRILIA
After taking a fantastic 1-2 on the opening day, Aprilia Racing end the Sepang Test in P2 and P5 thanks to the efforts of Aleix Espargaro and Maverick Viñales. The new 2022 bike – with updates across the board – has been very well received by both riders. Aleix Espargaro has praised the turning and corner speed improvements, although the Spaniard does remain undecided on which chassis is best.

Technical Director Romano Albesiano explained that Aprilia’s longer runs at the Sepang Test, which included a 12-lap run for Espargaro, have been “to measure the temperature of the working components,” not seeing how fast Espargaro and Viñales can go. Whichever way you look at things, Noale have started 2022 on the front foot. Both Espargaro and Viñales are within 0.130s of Bastianini’s quickest time, so three more days in Mandalika should be enough time to iron out any remaining issues they have before the Qatar GP.

SUZUKI
Suzuki confirmed they had “significantly improved the engine”, which was a real key for the Hamamatsu factory as the inline-four machines – Suzuki and Yamaha – look to gain top speed without compromising elsewhere. There was more mixed feedback for aero and chassis updates but plenty that did work, making for some more good news.

Alex Rins (Team Suzuki Ecstar) was the fastest Suzuki once again, slotting into fourth and less than a tenth and a half off the top. 2020 MotoGP™ Champion Joan Mir was P12, still within four tenths of Bastianini as the timesheets were split more often by hundredths and thousandths. Mir also crashed, rider ok.

YAMAHA
Yamaha’s engine has been a talking point for a few seasons now and after winning the World Championship in 2021, Fabio Quartararo (Monster Energy Yamaha MotoGP™) wanted more top speed. There has been a small step, but both Quartararo and Team Manager Maio Meregalli explained they expected a bigger improvement, so they’re focusing hard on other areas – mainly aerodynamics – to get the best out of the updated YZR-M1.

“We didn’t make any revolution, we tried to improve the bike we used last year and we mainly focused on aerodynamics, we started to compare two chassis and in my opinion the ‘real test’ will be in Mandalika, where the riders have their speed and confidence back,” said Meregalli to MotoGP™’s Jack Appleyard and Simon Crafar. “There we will spend three days working and testing all the items we’ve tested here. To take a decision on which way we can go is too early, we would prefer to wait in one weeks’ time to have a better overview of what is working better.”

Quartararo’s best time at the end of the test was a 1:58.313, 0.182s down on Bastianini’s effort, but he sounded pleased with his pace. The Frenchman also saved a couple of sets of tyres for the afternoon, but rain put a stop to him heading out to try and go faster. Overall, it was an upbeat Quartararo by the end of the Sepang Test though. His lap time put him in seventh place, with the next best Yamaha down in P22. Andrea Dovizioso (WithU Yamaha RNF MotoGP™ Team) completed 55 laps as he continues his adaptation to the latest-spec Yamaha, with Franco Morbidelli (Monster Energy Yamaha MotoGP) and rookie Darryn Binder (WithU Yamaha RNF MotoGP™ Team) 24th and 25th respectively. Test Rider Cal Crutchlow was on track too, and we’ll be seeing more of the British rider in Mandalika.

Darryn Binder was able to get some wet weather laps under his belt in the afternoon on Day 2 as well, and finished 1.7s away from the fastest time at the Test. Very respectable from the South African, who now has three more days to get acquainted with his new bike in Mandalika.

Marc Marquez ended the Test with a 1:58.332 in P8 as the Spaniard got an important 101 laps under his belt overall. The new bike is a “big change” from the previous RC213V and Marc Marquez admitted he needs time to find the limits with the new bike, and at the end of Day 1 he was “very tired”. However, he did feel good with the package. Two crashes on Day 1 didn’t affect his preparations for the new season, and the three days coming up in Indonesia will be vital for the eight-time Champion.

Pol Espargaro was into the top 10 with a 1:58.420 to finish a couple of tenths away from the best pace, with Nakagami and Alex Marquez also in the 1:58 bracket. All three riders have been testing the 2022 RC213V from the get-go in Sepang and the signs are positive from the Japanese manufacturer.

KTM
For KTM it remained a more muted test on the timesheets, but new Red Bull KTM Factory Racing Team Manager Francesco Guidotti said the focus for now, after a tougher 2021, is getting a good base to begin the season, and one from which the Austrian factory can then further develop. Guidotti said they’d had a lot of work to do and plenty of new parts, as well as a lot from 2021 to evaluate better. Some parts were “much better than expected”, and some things “so-so”, according to the Italian.

Miguel Oliveira (Red Bull KTM Factory Racing) was the fastest of the Mattighofen contingent in 15th but still within 0.570 of the fastest ever lap of the track, and Brad Binder was only a few places and a few tenths behind his teammate. On rookie watch, Raul Fernandez (Tech 3 KTM Factory Racing) was right behind Brad Binder and got down to a 1:59.180, 0.164 off the South African. 2021 Moto2™ Champion Remy Gardner, still pushing through the pain barrier after breaking his wrist in training, put in a best lap of 1:59.348.

That’s it from Sepang until the paddock returns later in the season to go racing. Now it’s time to pack up and head for the new Pertamina Mandalika Circuit for the second and final pre-season Official Test, with three days of action on the cards in Indonesia.

#SepangTest
Get All Our Latest News Sent Direct To Your Inbox
Join 30,253 other subscribers.
Follow on Social Media
Get the VROOM Podcast
Download our Vroom.GP App