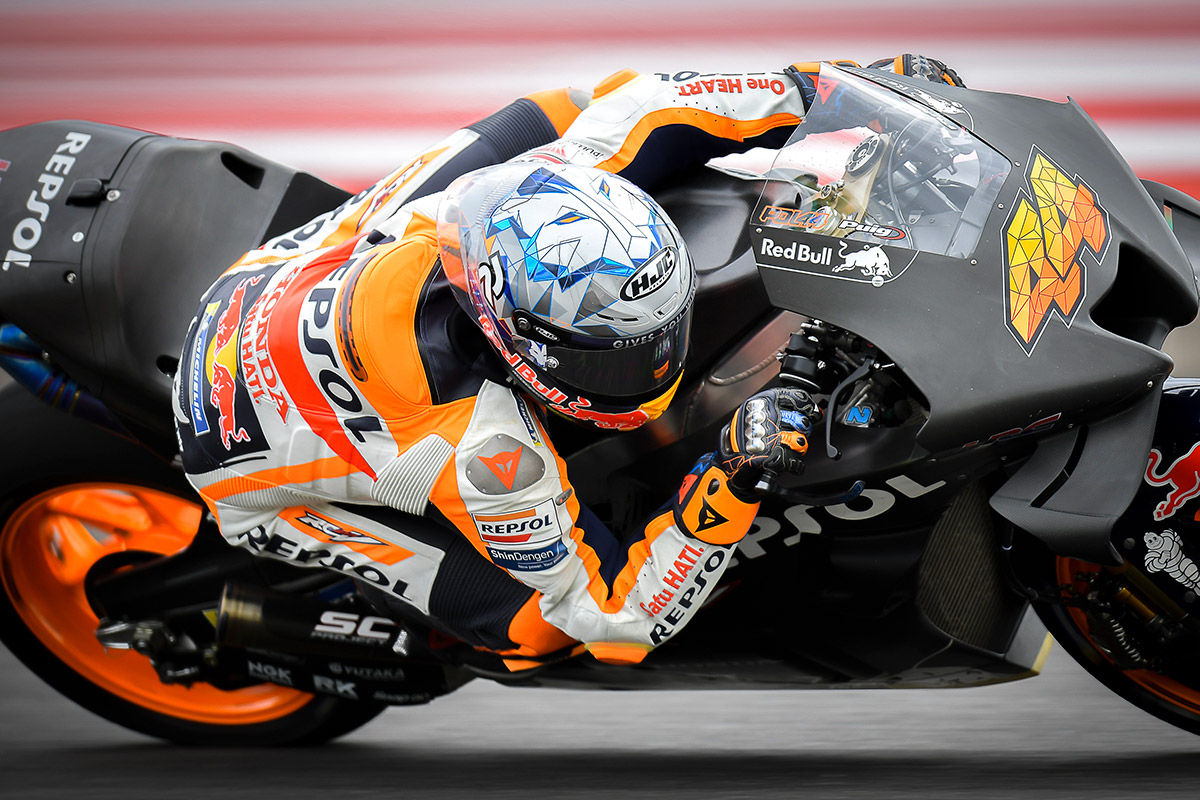 Due to track conditions, the red flags were brought out during the morning to get a clean up operation underway. Heavy overnight rain had caused the circuit to become dirty, but as the day went on, the track got quicker until we eventually saw three riders dip into the 1:32s. The riders were able to get some decent running under their belts in the closing stages, but light rain then started falling heading into the final half an hour, so any late time improvements weren’t possible.

HONDA
Due to the riders and teams having to learn the new Pertamina Mandalika Circuit, there wasn’t too much to talk about in terms of new updates on the bikes. After briefly running a 2021 RC213V at the Sepang Test, Marc Marquez (Repsol Honda Team) – unsurprisingly – was solely lapping on HRC’s 2022 spec machine.

Pacesetter Pol Espargaro completed 69 laps, setting his best right at the end of his run, as the Spaniard finished 0.9 clear of the next quickest Honda. That was 11th place Takaaki Nakagami (LCR Honda Idemitsu) who was one of a few riders who crashed at Turn 10 on the opening day. The Japanese rider was on a personal best lap when he went down uninjured, but that signalled the end of his day.

Alex Marquez (LCR Honda Castrol) and Marc Marquez were 1.2s and 1.3s off Pol Espargaro respectively, both notching just over 60 laps too. The number 93 explained it as a “good day” despite conditions being unpredictable but is remaining calm ahead of two big days of testing coming up.

APRILIA
The Noale factory’s most notable focus has been on chassis direction. Aleix Espargaro and teammate Maverick Viñales had a great time over in Sepang and if the times are anything to go by so far in Mandalika, the RS-GP continues to look in very good shape.

Espargaro was second and 0.4s behind his brother on the timesheets, completing 60 laps, with Viñales seventh quickest with a 1:33.147. Top Gun put in 56 more laps on board his new bike and was one of the first to bolt to the top with a couple of hours left on the clock.

KTM
Brad Binder shot to the sharp end late in the day, and after having been penultimate on the timesheets earlier on. The South African ended the first day in third, just 0.006 off Aleix Espargaro, and was the last rider into the 1:32s. Teammate Miguel Oliveira’s best lap was a 1:33:748, slotting him in just ahead of eight-time World Champion Marc Marquez. Binder did 64 laps and Oliveira 77 on Day 1.

Raul Fernandez (Tech 3 KTM Factory Racing) was the first back out after the Red Flag, the rookie intent on using as much track time as possible, and he put in a best of 1:33.966. With difficult conditions; changing, wet and interrupted, the uphill challenge was even more so for the debutants. 2021 Moto2™ Champion Remy Gardner (Tech 3 KTM Factory Racing) was P24 as he continues to push through the pain barrier.

SUZUKI
The good vibes seemed to continue despite the challenges of taking on a brand new venue, with both Alex Rins and his Team Suzuki Ecstar teammate, 2020 MotoGP™ Champion Joan Mir, in the mix at the front again. Rins was fourth, just under six tenths off the top, and the Spaniard put in 72 laps. Mir was eighth with a deficit of 0.778 to the top, and he put in 58 laps.

Mir’s crew chief Frankie Carchedi joined MotoGP™’s Simon Crafar and Jack Appleyard half way through the day on YouTube, and repeated what Team Suzuki Ecstar Project Leader Shinichi Sahara had said in Sepang: “significant improvements” have been made for the Hamamatsu factory.

YAMAHA
Reigning World Champion Fabio Quartararo (Monster Energy Yamaha MotoGP) was the fastest YZR-M1 rider on the opening day, as the Frenchman claimed P5 on the timesheets. A hefty 86 laps came in from Quartararo, the second most of anyone. His teammate Franco Morbidelli did 75 and finished P12, the Italian getting some important time on the 2022 bike.

Important time on the 2022 bike is exactly what Andrea Dovizioso (WithU Yamaha RNF MotoGP™ Team) needs too, and the Italian got just that on Day 1. 57 laps was the number Dovi clocked, with his best coming in at a 1:33.245 – placing the number 04 in ninth. Rookie Darryn Binder (WithU Yamaha RNF MotoGP™ Team) slashed plenty off his quickest time when the conditions became more favourable, the South African finished two seconds down on P1 having got a handy 58 more laps of experience in the bag.

DUCATI
It was Jack Miller (Ducati Lenovo Team) who led the Bologna charge on Day 1, the Australian ending the day in sixth but just 0.006 off Quartararo. After Viñales had made the first push to the top in the latter stages, Miller responded to take over for a while before getting leapfrogged and pushed back down the order. The only other Ducati in the top ten was Jorge Martin (Pramac Racing) as the sophomore took P10 despite a tumble.

Johann Zarco (Pramac Racing) was P13 but stole some headlines with a whopping haul of 96 laps – only one other rider did more than 80, and that was reigning Champion Quartararo. Within a tenth of Zarco came the first rookie, once again on a Ducati as it was by the end of play in Sepang, but this time it was Fabio Di Giannantonio (Gresini Racing MotoGP™) – despite a crash, it was an impressive day’s work after the Italian missed two full days of track time at the Shakedown due to illness.

Two riders seemingly very out of position after a challenging first touch with the stunning new venue are Sepang’s record breaker Enea Bastianini (Gresini Racing MotoGP™), who was P18, and Francesco Bagnaia (Ducati Lenovo Team) down in P22, suffering a crash and the last non-rookie – so we can expect much more from Pecco as the test goes on.

#MandalikaTest
Get All Our Latest News Sent Direct To Your Inbox
Join 30,271 other subscribers.
Follow on Social Media
Get the VROOM Podcast
Download our Vroom.GP App