#MandalikaTest – Marini takes to the top on Day 2 in Indonesia 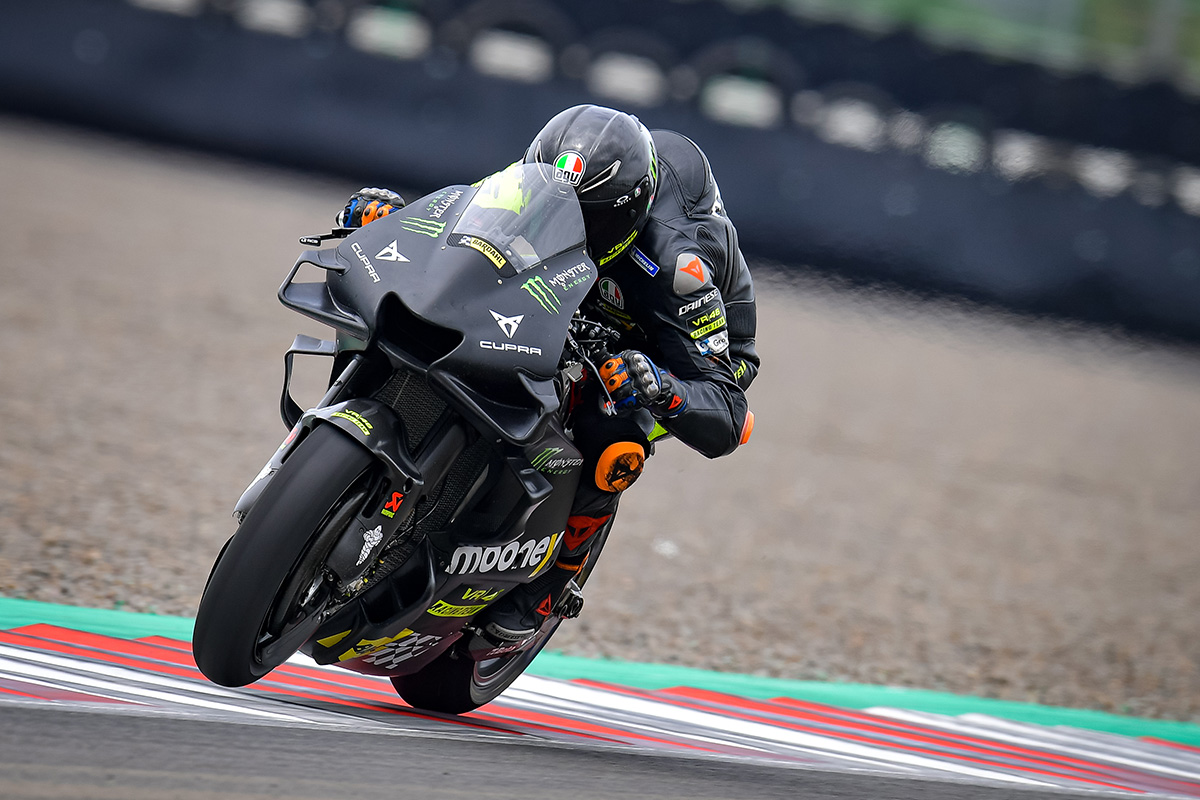 Mooney VR46 Racing Team’s Luca Marini stole the headlines on the second day of the Official MotoGP™ Mandalika Test after setting a 1:31.289, beating eight-time World Champion Marc Marquez (Repsol Honda Team) to the top by 0.192. Maverick Viñales put his Aprilia Racing machine into P3 as a second covers 20 riders heading into the final day of pre-season on Sunday.

It was a busy start to the second day as we saw the first 1:31s come flying in, with the top five riders split by less than a tenth as midday approached. Rain loomed in Lombok but ultimately stayed away for the most part and we witnessed plenty of action in the final hour of the day. Time attacks were on the menu and a lot of riders were able to improve their times, most notably Marini, who moved the goalposts to a 1:31.289.

Track conditions haven’t been perfect on Day 2, and off line the track is still dirty, but it’s been good enough for the teams and riders to be able to get some meaningful testing under their belts.

DUCATI
After a more muted start to life on a GP22 for Marini at Sepang, the Italian blasted out the blocks with a benchmark time attack on Day 2 in Indonesia. A host of riders put in fast laps towards the end of the session, but the 1:31.289 from Marini put him nearly two tenths ahead of Marc Marquez – after earlier, five riders had been within less than a tenth at the top. Marini’s lap is made even more impressive by the fact he first raced on a GP19 and is now starting his second season on a GP22.

The Borgo Panigale presence at the front was bolstered throughout the top ten, with Johann Zarco (Pramac Racing) in P6 ahead of Sepang’s fastest rider, Enea Bastianini (Gresini Racing MotoGP™). Jorge Martin (Pramac Racing) was ninth, with Francesco Bagnaia (Ducati Lenovo Team), after a tougher Day 1 well down the timing sheets, completing the top ten.

Fabio Di Giannantonio (Gresini Racing MotoGP™) was the top rookie once again as he got down to a 1:32.047 in P17, with a few tenths in hand over his fellow debutants. Marco Bezzecchi (Mooney VR46 Racing Team) was P22 and the third rookie.

Jack Miller (Ducati Lenovo Team), meanwhile, was P20 as work continues on putting everything together. He said he got through his whole programme of test items – which was a lot – and is looking forward to putting a time attack in.

Pitlane reporter Simon Crafar reported that Ducati appear to be moving away from the long, long exhaust we’d seen earlier in testing, and Miller confirmed it. The Australian said it had more of an impact on the older machine, but the positives don’t translate onto the GP22 and they “don’t need it”.

HONDA
74 laps and the second fastest time of the test so far signals a good day for Marc Marquez and Repsol Honda. The Spaniard’s best time was set on his penultimate lap of the day, a positive sign for the number 93, as one more day of testing remains before the action starts for real in Qatar. Teammate Pol Espargaro made it two factory Hondas in the top 10, the number 44 ending Saturday’s action in P8, 0.3 away from the top. Positive vibes are emanating from the Japanese manufacturer’s camp.

It was P15 and P16 for LCR Honda Idemitsu’s Takaaki Nakagami and LCR Honda Castrol’s Alex Marquez, both riders were six tenths away from Marini’s pace at the end of the day having completed a combined 142 laps.

APRILIA
The Noale factory continues to shine in pre-season. Viñales was able to go P3 on his 66th lap of 68, yet another encouraging outing for the Spaniard on the 2022 RS-GP, but Top Gun still has margin to improve. Braking on the side of the tyre has been an issue on the Aprilia for Viñales, so he’s been losing time in the final sector in Mandalika and had a few laps of three red sectors prefacing a deficit in the final one.

In addition, teammate Aleix Espargaro’s time attack was interrupted by a crash at Turn 12, so the number 41 heads into the last day in 14th.

YAMAHA
Top Yamaha honours once again went the way of Quartararo who has, so far, enjoyed his time in Mandalika after what seemed an underwhelming Sepang Test. The Frenchman is feeling good on used tyres but not so great on new softs, so that’s an area to look at on the final day of testing. 68 more laps were completed by the reigning Champion, who briefly sat as the fastest rider on track before his time was bettered by Marini, Marc Marquez and Viñales. Pitlane Reporter Simon Crafar also revealed that the World Champion has been testing two different chassis again.

Franco Morbidelli (Monster Energy Yamaha MotoGP™) notched up 64 laps as the Italian continues to work his way back to full fitness and full confidence, finishing three tenths away from teammate Quartararo. Meanwhile, compatriot Andrea Dovizioso (WithU Yamaha RNF MotoGP™ Team) did climb into the top 10 in the final hour, but the Italian was shuffled back down the order when the time attacks were slung in. Dovizioso crashed unhurt at Turn 9 on Day 2.

Rookie Darryn Binder (WithU Yamaha RNF MotoGP™ Team) chopped 1.4s off his best time from Day 1 to Day 2 on another day where the South African continued to adapt to life as a premier class rider. 54 laps came in from Binder but a crash at Turn 12 with just seven minutes to go slightly hampered what looked like a promising day. The number 40 finished 1.7s away from Marini’s pace. .

SUZUKI
On Day 2, 2020 MotoGP™ Champion Joan Mir was the lead Team Suzuki Ecstar machine, slotting into fifth and with the exact same fastest lap as Zarco just behind him. But from Marc Marquez in second to Zarco in sixth, the laptimes were covered by one single tenth. Mir also crashed on Day 2 at Turn 11, rider ok. Alex Rins (Team Suzuki Ecstar) was down in P12 after getting shuffled well down the order in the flurry of late time attacks, having earlier been one of the riders in the top five covered by a tenth.

Mir said they were missing some team members due to isolation, which made the day harder, but finally they “found the way”. He said every exit over testing has felt better and better, and the difference he could feel on the softer tyre was a positive – something that could prove interesting come qualifying…

KTM
Brad Binder (Red Bull KTM Factory Racing) looked set to end the day quickest until late on, with the South African then shuffled down to P11 as many in the field put in time attacks. Nevertheless, the number 33, the KTM and the Mandalika track seem to make a good mix after now two days of impressive performances. Binder did 53 laps, and had his day cut marginally short as the South African suffered an issue on his last exit.

Miguel Oliveira (Red Bull KTM Factory Racing), meanwhile, put in a mammoth 84 laps and was P18 was a 1:32.200. On rookie watch, Raul Fernandez kept the Tech 3 upper hand but was second debutant on Day 2 and suffered a crash. He headed up a gaggle of four rookies from P21 to P24. 2021 Moto2™ Champion Remy Gardner continued battling through the pain barrier and put in an impressive 69 laps, with a best of 1:32.598.

#MandalikaTest
Get All Our Latest News Sent Direct To Your Inbox
Join 30,246 other subscribers.
Follow on Social Media
Get the VROOM Podcast