#MandalikaTest – Pol Espargaro back on top as 21 riders end testing within 0.855 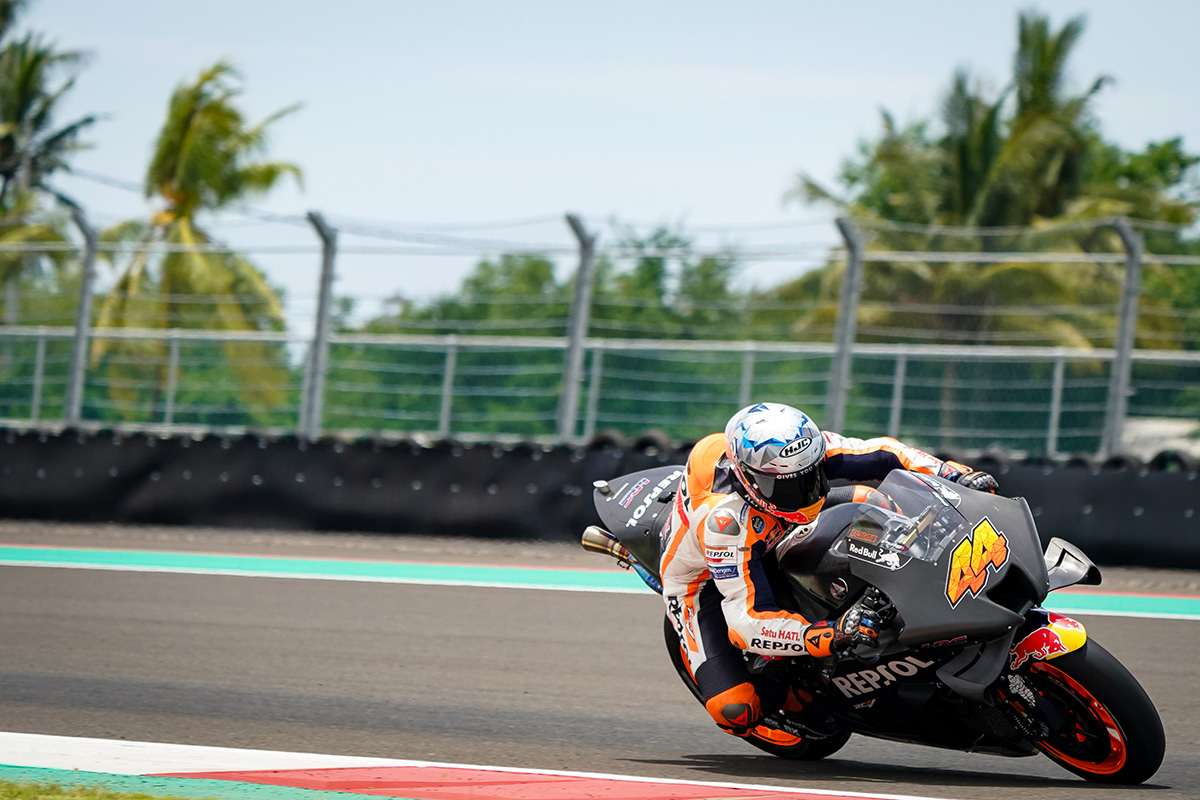 2022 MotoGP™ pre-season testing is over… After three days in Indonesia, focus now shifts to the season-opening Qatar GP and heading in as the fastest rider from the Mandalika Test is Repsol Honda Team’s Pol Espargaro. The Spaniard set a 1:31:060 on Day 3 to beat reigning World Champion Fabio Quartararo (Monster Energy Yamaha MotoGP™) by just 0.014, with Luca Marini (Mooney VR46 Racing Team) completing the top three thanks to his Day 2 best at the brand-new, spectacular Pertamina Mandalika Circuit.

21 riders, down to Fabio Di Giannantonio (Gresini Racing MotoGP™), are split by just 0.855 heading to Qatar, setting the scene for another spectacular season of racing.

HONDA
As pre-seasons go, HRC’s has gone incredibly well. A brand-new, very different RC213V was brought to the table and ahead of the Qatar GP, the Japanese giants look in good shape. Pol Espargaro leading the way in Mandalika will inject the factory with a nice dose of confidence for man and machine, with the number 44 posting a further 38 laps on the final day. His words spoke volumes: “I’ve never been so fast before.”

The same positivity was heard from Marc Marquez (Repsol Honda Team). The eight-time World Champion ends the Mandalika Test in ninth as the second Honda, 0.4 shy of Espargaro, but it’s all smiles in the number 93’s camp. Improvements have been made day-by-day in Mandalika, although Marc Marquez admitted he doesn’t have the “special feeling” with the bike still and was suffering on the final day. That meant no time attack, but testing couldn’t have gone much better.

Alex Marquez (LCR Honda Castrol) clocked up another 75 laps and the two-time World Champion was 12th overall, half a second from P1 as he focused on long runs and aerodynamics. Takaaki Nakagami (LCR Honda Idemitsu) was testing two completely different chassis on Saturday afternoon and on Sunday, ultimately finishing 17th on the combined standings and 0.6 away from the top. Nakagami lapped a whopping 91 times on the final day.

YAMAHA
Quartararo finished P2 in Indonesia with a late time attack, but the lack of improvement with top speed remained a concerned. The Frenchman, however, has expressed his joy at his speed with used tyres, but something wasn’t clicking with new, soft tyres. “We need to know why,” is what Quartararo said on Day 2. But on Day 3, the number 20 said he was “feeling good” as testing comes to an end, and is in good spirits despite both he and the team expecting more from the new engine.

Franco Morbidelli’s (Monster Energy Yamaha MotoGP) Mandalika Test saw the Italian claim P5 on the timesheets after a late time attack, 0.3 from the top. Morbidelli explained at the end of Day 2 that he’s riding the bike too much on the rear, meaning he’s got little confidence with the front. And on Day 3, the number 21 was changing front forks.

62 laps came in from Andrea Dovizioso (WithU Yamaha RNF MotoGP™ Team) who finishes 19th, eight tenths away from the top. Pre-season was all about the Italian getting used to the characteristics of Yamaha’s 2022-spec YZR-M1. Darryn Binder (WithU Yamaha RNF MotoGP™ Team), meanwhile, has his first premier class pre-season under his belt and finishing under two seconds from the fastest time is a job well done for the South African. 61 more laps will be more than valuable for the rookie who is making the leap from Moto3™ to MotoGP™.

DUCATI
Marini remains the top Ducati overall thanks to his Day 2 time, with Francesco Bagnaia (Ducati Lenovo Team) the next Borgo Panigale presence on the timesheets in sixth, 0.376 off the top. Johann Zarco (Pramac Racing) completed the top ten, Enea Bastianini (Gresini Racing MotoGP™) took P13 on the GP21 and Jorge Martin (Pramac Racing) ended the test in 16th. Jack Miller (Ducati Lenovo Team) was P18, but the feedback from the majority was largely positive and centred on progress. Miller crashed on his race simulation, and Martin and Zarco both took tumbles too, riders ok.

During the hottest part of the day in Indonesia, pitlane reporter Simon Crafar was especially impressed by Bagnaia’s race pace. It seems the GP22 is definitely faster too, although Ducati Lenovo Team manager Davide Tardozzi said power delivery is an area they can still improve. Overall the Italian said the factory was 80% satisfied so far with pre-season.

The revised aero remained on both Ducati Lenovo Team and Pramac Racing machines by the end testing, that seeming a done deal, and the riders said the longer exhaust doesn’t work at Mandalika – but could do elsewhere.

By the end of play, it’s Marco Bezzecchi (Mooney VR46 Racing Team) who once again takes the top rookie honours – but by just 0.014 ahead of Fabio Di Giannantonio (Gresini Racing MotoGP™) in P20 and P21. The two Ducati-riding rookies had a few tenths in hand over their fellow debutants, too.

APRILIA
It’s been a hugely successful pre-season test in Mandalika for Aprilia Racing’s Aleix Espargaro and Maverick Viñales, who continued their good work from Sepang. A fantastic handling RS-GP and upgrades across the board see both riders in very good stead heading to Qatar, with both doing a 20-lap, race simulation on the final day too.

Aprilia were testing two different chassis that were almost identical to the naked eye, even for our resident expert Simon Crafar. P4 for Espargaro and P8 for Viñales reads well, and all the signals from the Noale camp are positive after three days of testing in Mandalika.

SUZUKI
At Team Suzuki Ecstar, it was another day of hurdles – at least for one side of the garage. 2020 MotoGP™ Champion Joan Mir began feeling unwell in the morning and ultimately returned to the hotel with suspected food poisoning. He remained relatively positive, however, and on the combined timesheets remains P12.

“These things happen,” explained the number 36, “and in the end I have some good conclusions from the first and second day. I think we will arrive quite ready for the first race in Qatar despite all the inconveniences we found during the last two days here in Mandalika.”

Teammate Alex Rins was once again the first out on track on Day 3, and his plan for the final day was to focus on testing the Hamamatsu factory’s carbon reinforced chassis. By the end of the action, the number 42 was P7 overall after another 46 laps on Day 3.

KTM
Day 3 saw KTM testing their aero package, and there was a modified tail exhaust on show from the Austrian factory. Brad Binder ends the test as top Red Bull KTM Factory Racing rider in P11, 0.514 off the top after 68 laps. His teammate Miguel Oliveira was one of the last on track on Day 3, and the Portuguese rider was 0.560 off and in P15 by the end of play – improving on Lap 71 of 73. The Austrian factory’s pre-season mission was finding a good base to use to develop throughout the season, comparing new parts and parts from 2021 to find a focused direction. Binder and Oliveira certainly put in the laps as KTM try and get back towards the front after a tougher 2021, despite having still taken victory with both riders.

By even Day 2 of the Mandalika Test, Binder said the factory is in much better shape heading into Qatar than they were this time last year, and overall the South African was pretty positive by the end of play: “So far so good. We’ve found some things that work well for us and we’ve improved our package from last year. We still need to work for sure and there’s work to be done to take that next step that we need, but so far so good.” The next focus? “The drive out the corners and rear grip in general.”

On Tech 3 KTM Factory Racing rookie watch, Raul Fernandez ends the test in P22 and a couple of tenths ahead of teammate and 2021 Moto2™ Champion Remy Gardner. Fernandez, following a crash on Day 2, then sat out most of the running on Sunday, and Gardner continues riding through the pain barrier from a broken wrist.

That’s a wrap on the #MandalikaTest. Now it’s time to head for Qatar for the opening race of the season before the field returns to Pertamina Mandalika Circuit for Round 2.

#MandalikaTest
Get All Our Latest News Sent Direct To Your Inbox
Join 30,242 other subscribers.
Follow on Social Media
Get the VROOM Podcast