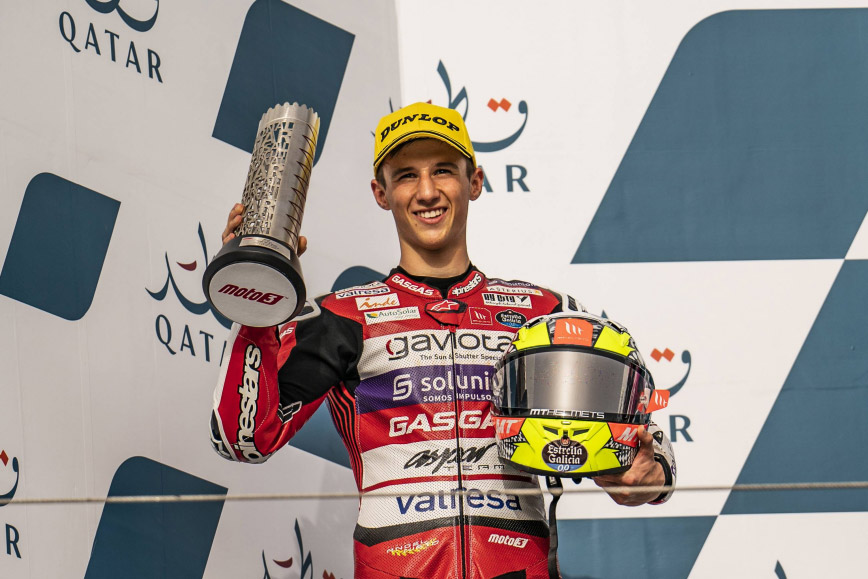 The Gaviota GASGAS Aspar Team has opened 2022 with the first podium of the season, thanks to Sergio García Dols’ second position at the Qatar Grand Prix. The Spanish rider, who started from sixth position on the grid, has not given up at any time and has fought until the last corner to try to win the race, but has finished 37 thousandths off the victory. García has competed from start to finish with the leading group, but an incident on the first lap with Carlos Tatay has led to a penalty that has taken him to eleventh position. However, this has not discouraged the Gaviota GASGAS Aspar Team rider, who has continued to grit his teeth until the end, gradually overtaking the rest of his rivals until he crossed the finish line in second position, thus achieving his first podium of the year.

Izan Guevara achieved pole position for the Moto3 Qatar Grand Prix on Saturday, but race direction considered that he had disturbed other riders on his way out onto the track and sanctioned him by starting from the back of the grid and serving a long lap penalty in the race. Despite this, Guevara started strongly and recovered a dozen positions in the first lap. From there, he has followed his comeback, stopped only by the penalty he had to serve in the race, until he finished eighth and got the first eight points of the season. Guevara finished 2.5 seconds behind the race winner, Andrea Migno, a time very similar to the one lost serving the penalty. The next appointment for the Moto3 riders will be the Indonesian Grand Prix, on March 20, at the Mandalika circuit.

2nd Sergio García (+0.037):
“We did everything we could today! What an amazing race it was. It was very difficult for me because the race was running at a very fast pace. I felt really good with the bike – I pushed hard despite the long lap penalty. I felt like my pace which I was able to build up through the race was incredible. To start the year off with a podium is fantastic, obviously we need to keep pushing now and carry this speed over into the next round. A big thankyou to the team for their hard work over the winter. For me, at this moment now, I’m just really happy!”

8th Izan Guevara (+2.545):
“Happy for the race we made and the race rhythm was pretty good, especially with the consistency. I was attacking to stay with the lead group but our race was obviously conditioned from the start. I hope we can be at the front again in Indonesia because we really should have been fighting for the podium today. Thanks to the team for all their work this weekend. Onto Mandalika.”