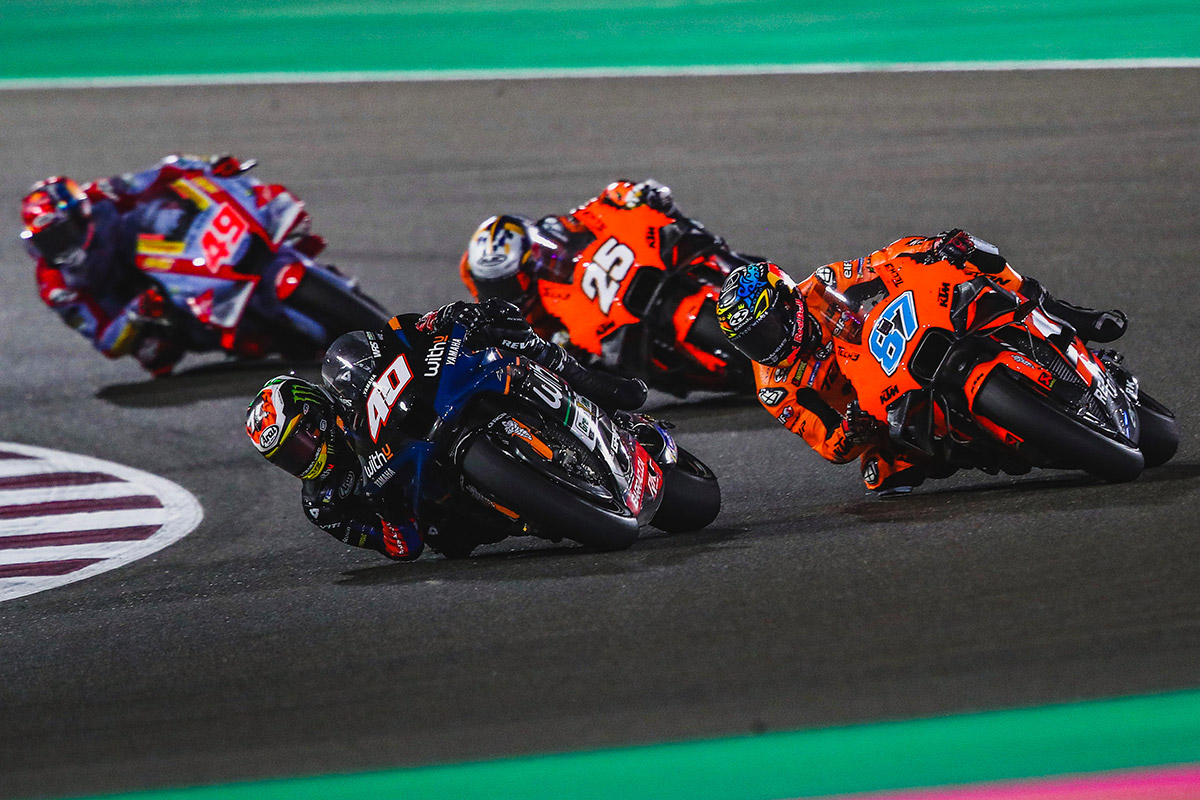 WithU Yamaha RNF MotoGP Team‘s Andrea Dovizioso crossed the finish line of the Qatar GP in P14. The Italian experienced a tricky Qualifying yesterday, which made him start the race just in 20th position. With a decent launch off the line, he made up several positions but couldn’t find a strong rhythm right away and went back to P22 on lap five. Yet, he managed to speed up in the course of the race and made up several positions until he reached the points in lap 12 and setting a personal best lap time of the race in lap 13. He used his experience to fight until the end and eventually saw the flag in 14th.

On the other hand, Darryn Binder delivered an impressive premier class debut in Qatar. After jumping straight from Moto3 to MotoGP, he made a rookie mistake in Qualifying and started last. He pushed right from the word go to make up places, finding himself inside the top 20 on lap seven and making up more and more ground. He was leading the battle of the rookies for several laps in a very strong way, fighting for his first MotoGP point, but finally missed out on it by just 0.012 seconds.

Now the entire WithU Yamaha RNF MotoGP Team is excited to head over to Indonesia to compete at the inaugural Grand Prix at the Mandalika Circuit in less than two weeks’ time.

“I can’t be happy. At the beginning of the race, I was gaining some positions, but I had a problem with the front pressure, I couldn’t stop the bike, I almost crashed three times and I went out from the track two times. I was losing a lot, but after that when I was alone the pressure becomes acceptable and I was able to push again and start to do a normal lap time. But anyway, my speed is still not good, you have to ride the bike in a specific way or you will use even more of the tyre, even if you are not that fast also. I can’t be satisfied about that, so we have to study and try to understand what we have to do.”

“We finished off the first race in Qatar and overall I’m quite happy. It’s been a difficult weekend with loads of learning curve, there’s not a lot of time in a race weekend to get everything together. Yesterday in the Qualifying I messed up, so today I just wanted to take it step by step and learn as much as I could. I got off to quite an ok start, I was pretty fast in the beginning, so I was making some passes and I was pushing too much for a couple of laps. By lap five I needed to take a step back and find my feet because I had a long race ahead of me. I had a nice battle with Remy (Gardner), I really enjoyed fighting with the rookies, I learned so much throughout the race and by the end, I really wanted to fight for 15th, for the point, but I just missed out. Overall, at least I finished the race, I got 22 laps under my belt now, I know what to expect for next weekend and try again.“