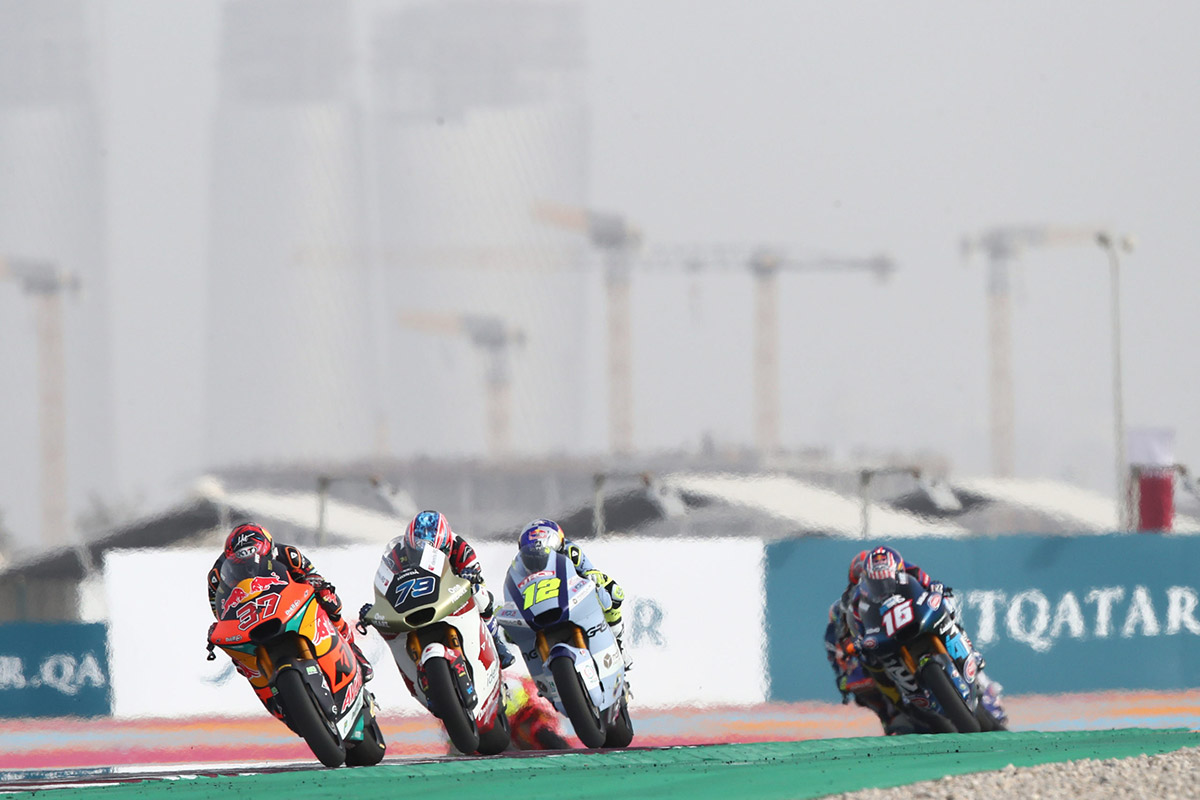 After a long winter break, the Qatar Grand Prix opened the 2022 season at the Lusail International Circuit this Sunday. Augusto Fernandez did a great job in the race, fighting to the end in a quest for a podium. The Spaniard was fourth at the chequered flag, despite a collision with another rider on the last corner of the final lap when running third. Pedro Acosta made an excellent fightback in his debut in the intermediate class, climbing 16 positions to finish 12th.

Fernandez made a strong start, going from sixth position on the grid to second on the opening corner. The Red Bull KTM Ajo Moto2 rider caught up with the first group that tried to prevent the leader from pulling away but was left to battle amongst themselves. The pack split at the midway point and the Spaniard started an intense fight with three riders for the final podium spot, moving up to third late on. However, contact with another competitor required a phenomenal save from Fernandez, who avoided a crash but dropped down to fourth.

Acosta, who took off from the fourth row of the grid, had a tough start and, in order to avoid colliding with another rider on the first corner, ran wide and lost several positions. The Red Bull KTM Ajo Moto2 rookie was relegated to the back of the field but regrouped to push hard to regain places. Acosta hunted down his rivals and progressively passed them, eventually claiming 12th.

Fernandez is in sixth place in overall standings with 13 points, whilst Acosta is 12th with 4. The Red Bull KTM Ajo duo will be back in action in two weeks, for the Indonesian Grand Prix on March 18-20th.

#37 AUGUSTO FERNANDEZ
“We end the weekend with a bittersweet taste in our mouths. However, we must be happy to have finished, since, after the setback on the last lap, it could have been worse. Besides this, I’m satisfied with how I felt on the bike. During the weekend we showed that we had the pace to be up at the front, although we gave our all to win the battle in the chasing group. Finally, the podium got away from us due to that incident, but we were lucky enough to be able to cross the finish line. We leave Qatar with 13 points, the season has just started and at the next round we will aim for more. I want to thank the team for all the work they have done during the weekend. We have shown that we are very competitive and strong, and this is what we take with us to Indonesia – where we will try again.”

#51 PEDRO ACOSTA
“Today we accumulated kilometres and very important experience. The important thing is that we had a very consistent race and that our pace was enough to be fighting with the riders in front. The start of the contest didn’t go as expected, but this can happen in your first Grand Prix in a class. We still have a lot to learn and we have to keep working hard to keep taking steps forward. In Indonesia we’ll try to improve in the standings, since starting far back on the grid penalises you a lot in Moto2.”