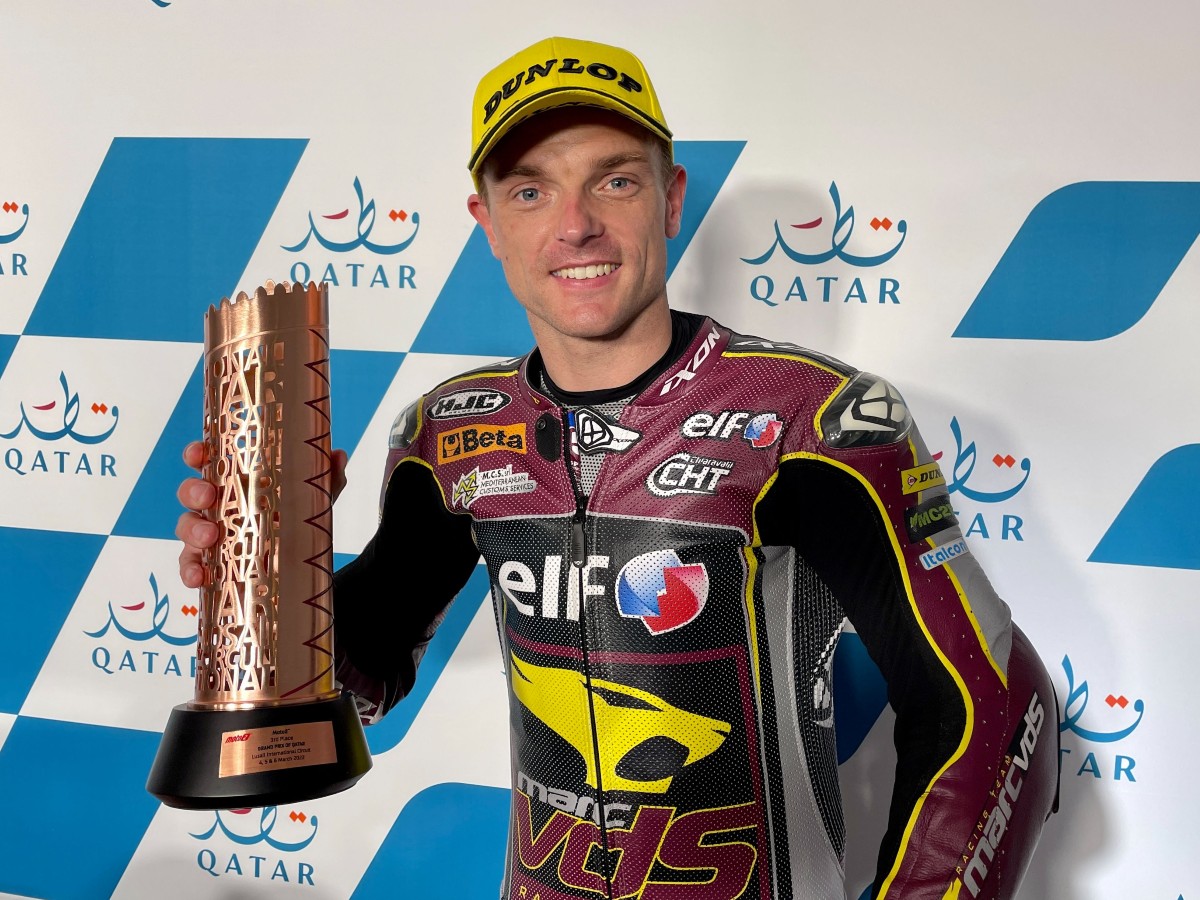 Sam Lowes gritted his teeth in heroic fashion to claim last-gasp third place in the first Moto2 race of the year, while Tony Arbolino made it double delight for the team by scoring a fantastic fifth.

The spectacular Lusail International Circuit hosted the first race of the 2022 season with the Moto2 race taking place over 20 laps with a 16.20 start.

After achieving a spectacular double front row start on Saturday, Elf Marc VDS Racing Team duo, Sam Lowes and Tony Arbolino, showed their excellent potential for the season ahead after being involved in a brilliant four-rider fight for third place.

In the end Lowes took the final place on the podium by just 0.078s and the Italian ended inside the top 5.

After a tricky start which dropped him from third to eighth, Lowes set his personal best lap of the race on lap 4 (a 1’59.062) to get involved in the fight for third place.

Due to the tendonitis issue in his left wrist, the 31-year old was struggling to stop the bike in heavy braking areas but nonetheless fought hard with Ai Ogura, Augusto Fernandez and team-mate Tony Arbolino.

Starting the final lap fifth, Lowes took advantage of the fighting ahead to clinch third exiting the final corner for his 24th podium finish in the Moto2 class.

It’s been a difficult couple of weeks. But we had a good qualifying yesterday and a podium today! The race was difficult. There were a couple of guys that were stronger than me. It was in a nice battle but I couldn’t ride how I wanted to ride. So, to get some points on the board is good and to get the podium at the end is fantastic. Overall, I have to be quite happy with the weekend. The team did a fantastic job because over the winter we didn’t really have anything to build on. They’ve done brilliantly to give me a fantastic bike. I’m happy to get some points on the board and I look forward to Indonesia.

In his first race for the team, Tony started well, holding second place early on before being shuffled back to fourth.

A small mistake when braking at turn 6 on the ninth lap moved the Italian back to sixth, but Tony stayed right in the fight for third until the final lap.

The 21-year old rode intelligently to take advantage of some drama ahead at the final corner to come home 5th for his second best result in the class, 1.2s back of 3rd.

It was a good race. I had good pace. I just hit a neutral in turn six and missed some flow there. Otherwise, I had an amazing feeling. If you had offered me a top five finish this weekend before we came here, I’d have said to you, ‘Difficult!’ As at the test we weren’t so close. But we are close in this moment. We need to fix two things, which are the final two small steps to make. Honestly, I’m happy. I want to thank my crew who worked a lot. They are so motivated and this makes me happy. Let’s keep working. I believe we can do more. For the moment we’ll keep pushing and keep believing that we can be on the podium soon.