NOT The MotoGP News: The revolution WILL be televised*… And so will the racing 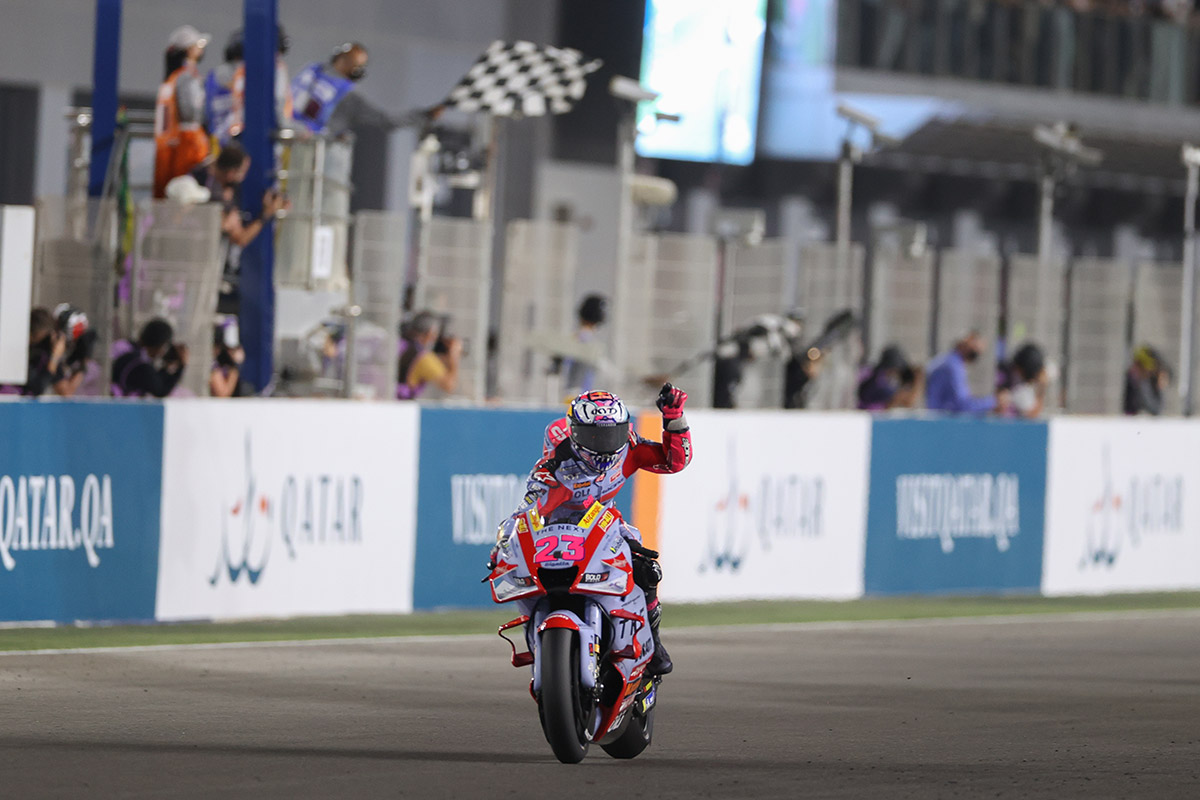 Well, well, well; like a Frank Sinatra career, it just keeps on coming back. Qatar we mean, not MotoGP. We’re happy MotoGP is back. We’re not so sure about Qatar turning back up on the calendar. It is however a reminder of all the things bad in the world right now, that aren’t nice, fair, equitable or indeed wanted. Why couldn’t that bastard in Moscow be one of the 6,500 workers killed in Qatar building the Word Cup stadiums? Lusail Iconic Stadium indeed. Isn’t it ironic.

Sport and politics, eh? Of course they mix. They’re mixed by everyone including people who should know better. Oh hello, here’s a new opening ceremony before the third race (after the first two races, one of which was the opening race). An unusually large number of band members wearing what can only best be described as iced cream parlour sales gear, hilariously marched out onto the circuit and proceeded to regale a small number of dignitaries with the stirring, memorable theme tune for Qatar marvellously not named “Here’s the next poor fucker about to be beheaded”. A pound shop opening ceremony.

Anywho, the race. The race. Yes, the race! Is he really a Beast? Cooler than Frankie. Faster than Marc. Nicer than Quat and Brad, Bastardsurnametospell won. And what a race it was. It would have been hard to believe Basti was going to win; hard to believe Ducati was going to win given the abject screw up the Ducatis had. All this hype about the Ducatis’ slingshot/holeshot/launch devices and basically, they went backwards. The Hondas and Brad’s KTM however were another proposition. Like a Russian offering money to a Tory MP. The red Ducatis of Baggy and Miller had a race they’ll spend hours wanting to forget. Miller had the misfortune of a fuse blowing whilst Baggy hit Jorge Martin trying to stop at T1. It’s a good job the factory is quite far north in Italy; it keeps them away from southern aggressive forces (Don’t mention the M**ia – Ed). The more Ducatis on the grid, the greater the chance of one knocking another over eh Digi?

Meanwhile the Suzukis didn’t. Well they did, but then they didn’t really. Mir and Rins had begun to promise a lot during Saturday Qually. They were fast which was a surprise. They handled brilliantly. They were going to win. But no. Too much sand, or rubbish headlights, or something else, they just did really do as well as expected, but better than had been expected. (What the actual are you talking about? – Ed).

And Marc. Well Brad (the man with a million teeth, or so it seems) passed him. On his underrated KTM. In fact, he was far and away the best South African in the race. And far and away the best KTM too. (All the facts you’ll ever need eh kidz?). Maybe Marc isn’t the threat he once was (we’ll live to regret even thinking that by the end of the season).

As ever Alex Marquez crashed out and became the first Honda to do so in a race this season. And the only one. Wonder where he’s going next season – kart racing?

The highest placed Yamaha was Quat in 9th. He was pipped for 8th by ageing rider and Charles Aznavour tribute act Johan Zarco, who at one point in the race was something like 18th. Tough times for Yamaha; Morbid-deli finished 11th and he’s now fully fit.

For every yin, there’s a yan and that was Aleix on the ‘Prilly who made TopBum look somewhat like an ageing Tom Cruise – no longer attractive or credible. MotoGP needs more Aleix – he beat Marc too.

*Writing this is pathetic. There’s a war going on and we stand with Ukraine and Ukrainians and every right-minded person who backs Ukraine. And no bunker jokes. (Can we say “Phuq Putin!!” Ed? Please?) (YES. Absolutely. Ed).

#QatarGP
Get All Our Latest News Sent Direct To Your Inbox
Join 30,253 other subscribers.
Follow on Social Media
Get the VROOM Podcast