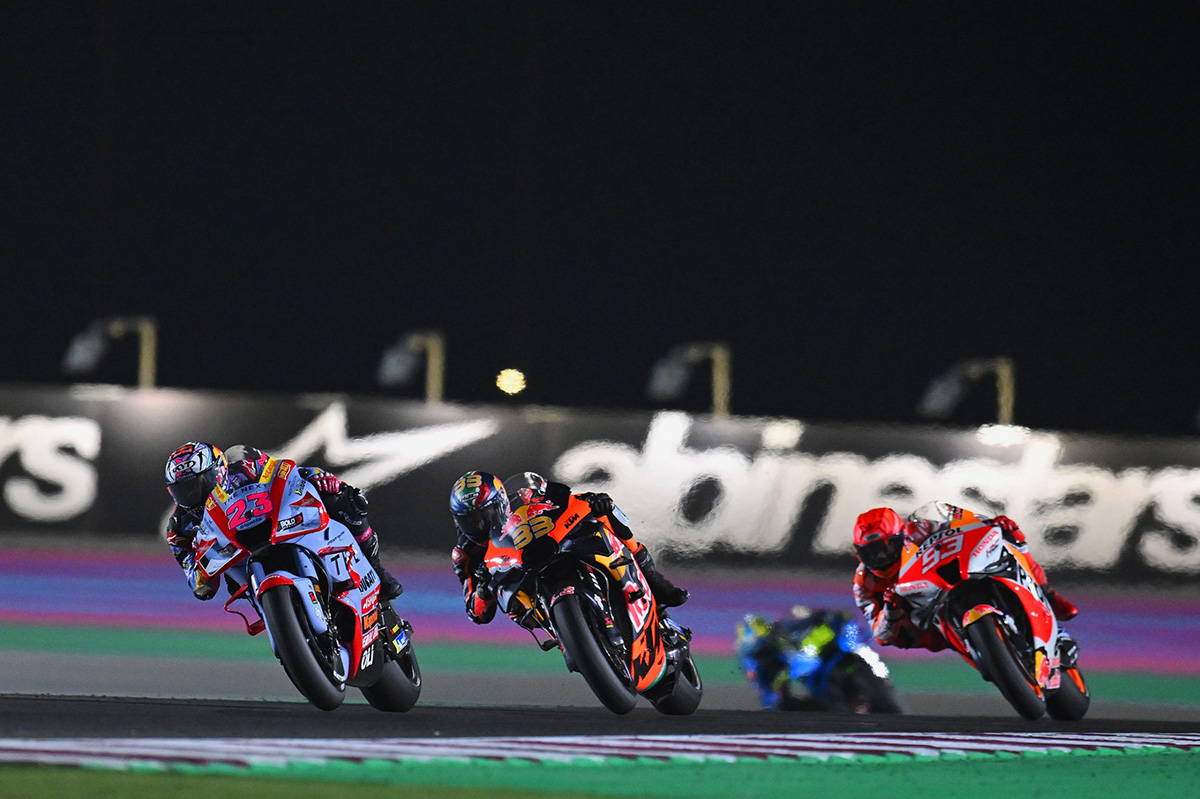 MotoGP is back, and the Qatar GP was as unpredictable as ever! As we head into the longest season in history, with the highest number of GP World Champions ever on the grid (14), anticipation and expectations are high. Who will be crowned champion at the end of the season? Who knows, but I’m sure we’re in for an enjoyable season.

At the pre-event press conference, riders were once again asked for their predictions – who will win each of the world championships this season? Fabio Quartararo, Marc Marquez and Pecco Bagnaia each chose themselves, while Brad Binder said hopefully a KTM rider. Maverick Viñales backed Jorge Martin, while Joan Mir picked Fabio, saying that last year he chose himself and nothing happened so he wasn’t picking himself again!

Moto2 predictions were split between Augusto Fernandez and 2021 Moto3 Champion Pedro Acosta, while Dennis Foggia was the most popular choice for Moto3. It will be interesting to see if any of these pan out – last year Jack Miller correctly predicted both Remy Gardner and Pedro Acosta would win in Moto2 and Moto3.

World Champion Fabio Quartararo explained that he heads into the season with a clean slate – he said that heading into the season trying to defend the title is a mistake and that it is better to start from zero like everyone else. He will of course have plenty of competition this season, not least from Marc Marquez who has stated that his goal for this season is to win the championship.

With Quartararo seemingly unhappy with the level of progress from Yamaha over the winter, Massimo Meregalli confirmed to BT Sport that there will be new parts arriving for the team to try once the paddock returns to Europe. He also said that the priority of the team is to retain Fabio, and that they are “in almost daily contact” with his management in order to make that happen.

New Suzuki boss Livio Suppo also confirmed that while he is working hard to get to know everyone in the team, his priority is the rider market. Suppo sounds keen to keep hold of both Joan Mir and Alex Rins saying that he and the team are very happy with both of them.

There were rumours flying around the paddock on Friday that factory Ducati team riders Jack Miller and Pecco Bagnaia were running the GP21 engine rather than the new GP22 after finding that the new engine was too aggressive in testing. Paolo Ciabatti confirmed to Sylvain Guintoli that Ducati have homologated 3 engine specs for their riders for the 2022 season – Gresini riders Bastianini and Di Giannantonio, and VR46’s Marco Bezzecchi are on the GP21 spec bike, Pramac duo Martin and Zarco, and VR46 rider Luca Marini are on the GP22 while Jack and Pecco are on what Ciabatti described as a hybrid between the two engines.

Track action got underway on Friday with FP1, and it wasn’t the best of starts for rookie Darryn Binder who had to be called back into the pits due to the belly pan hanging off his Yamaha. With 16 minutes to go in the 40-minute session, fellow rookie Fabio Di Giannantonio became the first crasher of 2022, but thankfully he was quickly back onto his feet. The session was topped by Brad Binder ahead of Taka Nakagami and Alex Rins.

FP2 looked likely to be an important session in terms of gaining progression directly to Q2, and the session got underway under the floodlights with Fabio Quartararo bashing at his handlebar to fix an issue. By the mid-point of the session, Aleix Espargaro, Marc Marquez and Joan Mir were the top 3, but with crucial Q2 slots on the line, there would be faster laps to come. At the end of the session, it was Alex Rins who had set the fastest time ahead of Marc Marquez, with Mir, Martin, Morbidelli, Miller, Aleix Espargaro, Quartararo, Pol Espargaro and Bagnaia holding the 10 Q2 places heading into day 2.

As FP3 got underway on Saturday, the general consensus was that there wouldn’t be any change to the times set on Friday and by the mid-point of the session, there had been no changes to the top 10. With just five minutes left on the clock though, the time attacks kicked off and people did in fact improve their lap times. As Alex Rins held on to the top spot, Enea Bastianini catapulted himself up to 5th place and world champion Fabio Quartararo dropped out of the top 10, meaning that for only the fourth time in his MotoGP career, he would be facing Q1.

The wind had picked up as FP4 got underway, and the session was topped by Johann Zarco ahead of Taka Nakagami and Aleix Espargaro.

After the first runs in Q1, it was Quartararo and Brad Binder who held the important top 2 spots, but as the session was drawing to a close Binder had moved ahead of Quartararo and Zarco was on a fast lap. A lap so fast that he would’ve bumped his compatriot out of the Q2 slot had it not been for the yellow flags brought out for a crash from Darryn Binder. So, it was Brad Binder – usually a terrible qualifier – and Fabio Quartararo who would march on into Q2.

Marc Marquez wasted no time in trying to get under the skin of his rivals, leaving pitlane directly behind Joan Mir for his first run in Q2, before hooking in behind Pecco Bagnaia for the second run. To their credit, Joan and Pecco didn’t seem too bothered by Marc’s antics despite Marc out-qualifying them both. It was Jorge Martin who set the fastest time and claimed his 5th pole position in the premier class. He would be joined on the front row by Enea Bastianini and Marc Marquez, with Jack Miller heading up the second row from Aleix and Pol Espargaro.

Top two in the championship last season, Fabio Quartararo and Pecco Bagnaia would be starting from 11th and 9th respectively.

On Sunday evening under the floodlights, the MotoGP riders lined up on the grid 112 days after the 2021 season finale in Valencia, and no one wanted to pick a winner – times had been close all weekend, and there were several people who could potentially win the race.

The race got underway, and as Jorge Martin had a shocker of a start, it was Marc Marquez who led Pol Espargaro and Brad Binder into turn 1. Pol Espargaro quickly overtook team mate Marquez to take the lead, while poleman Jorge Martin was passed by Fabio Quartararo for 7th. Joan Mir made his way through on Bastianini for 4th as Martin took 7th back from Quartararo.

Heading into lap two, Marc Marquez got in front of Pol Espargaro into turn 1 but promptly ran wide allowing Pol to retake the lead. A few laps later, Alex Rins was swarming all over the back of Fabio Quartararo and eventually passed him on the straight as up ahead team mate Mir was trying to catch Brad Binder for 3rd.

Binder though had other ideas and made his way through on Marc Marquez as he once again ran wide into turn 1, while Enea Bastianini punished Marc for the same mistake a lap later! Jack Miller dropped to the back of the pack and retired to the pits due to an issue with his Ducati, as out front Pol Espargaro continued to set the pace ahead of Binder, Bastianini, Marc, Mir and Aleix Espargaro.

Rookie Marco Bezzecchi crashed out of his first MotoGP race on lap 7, before Aleix Espargaro began challenging Joan Mir for 5th. After some back and forth Aleix made the move stick. The next few laps saw several crashes, with Alex Marquez and Miguel Oliveira both ending their races in the gravel at turn 1 on consecutive laps before Pecco Bagnaia lost the front while passing Jorge Martin, wiping him out and sending them both tumbling into the gravel trap.

Pecco immediately went to check on Jorge who was slower to get up. Pecco helped Jorge to his feet and they both walked away without injury. Back at the front Pol was extending his lead and Binder found himself demoted to 3rd courtesy of an overtake from Bastianini who set about closing the gap to Pol.

With just 4 laps to go, Enea had caught Pol and wasted no time in passing him on the straight. Pol got caught in the slipstream of the Ducati causing him to run way wide into the first corner and dumping him back to 3rd behind Binder, leaving Bastianini with a lead of over a second.

Enea kept his cool – and the lead – and blasted across the line to take his first MotoGP win, and the first win for the Gresini team in the premier class since Toni Elias won in Estoril back in 2006. Enea was followed over the line by Brad Binder and Pol Espargaro, with Aleix, Marc, Mir, Rins, Zarco, Quartararo and Nakagami rounding out the top 10.

Top rookie in the race was Remy Gardner, who crossed the line in 15th place to claim his first premier class point, just ahead of Darryn Binder. I have to say I’ve been impressed with Darryn this weekend – I was critical of his move to MotoGP, but he got his head down and chipped away all weekend, and gave a good show of himself.

Emotions were running high in the Gresini garage from the moment Enea took the lead, and they erupted when he crossed the line to win the race. There was so much going on – it was their first race back as an independent team, it was Enea’s first win, and it was the first premier class win for them not only since 2006, but since the death of Fausto Gresini.

Enea dedicated the win to Fausto, saying that they began this adventure together and they had made it to MotoGP, but now Fausto wasn’t here. He was then joined on the podium by team owner (and Fausto’s widow) Nadia Padovani as the paddock celebrated a very popular win.

Brad Binder hailed KTM for making such great progress with his bike, while Pol Espargaro declared that he and Honda are back. It is usually worth taking the Qatar GP results with a pinch of salt as far as the rest of the season goes, but it will be interesting to see how the season progresses – will Yamaha and Ducati (well, the newer Ducati) find the improvements they need, or will we see the older Ducati, KTM and Honda dominate?

It is of course far too early to tell – this is just the first round and there are still another 20 to go. This is MotoGP and anything could happen! Next up is a brand new circuit for everyone, which usually levels the playing field somewhat as everyone is starting from scratch with only the pre-season test to build from.

Pol Espargaro will no doubt be looking forward to heading to the Mandalika circuit on the back of his Qatar success – he was the fastest man over the 3-day test, but will he be able to translate that into a race result? We don’t have to wait too long to find out as the Indonesian GP gets underway on Friday 18th March.

#QatarGP, blog
Get All Our Latest News Sent Direct To Your Inbox
Join 30,271 other subscribers.
Follow on Social Media
Get the VROOM Podcast