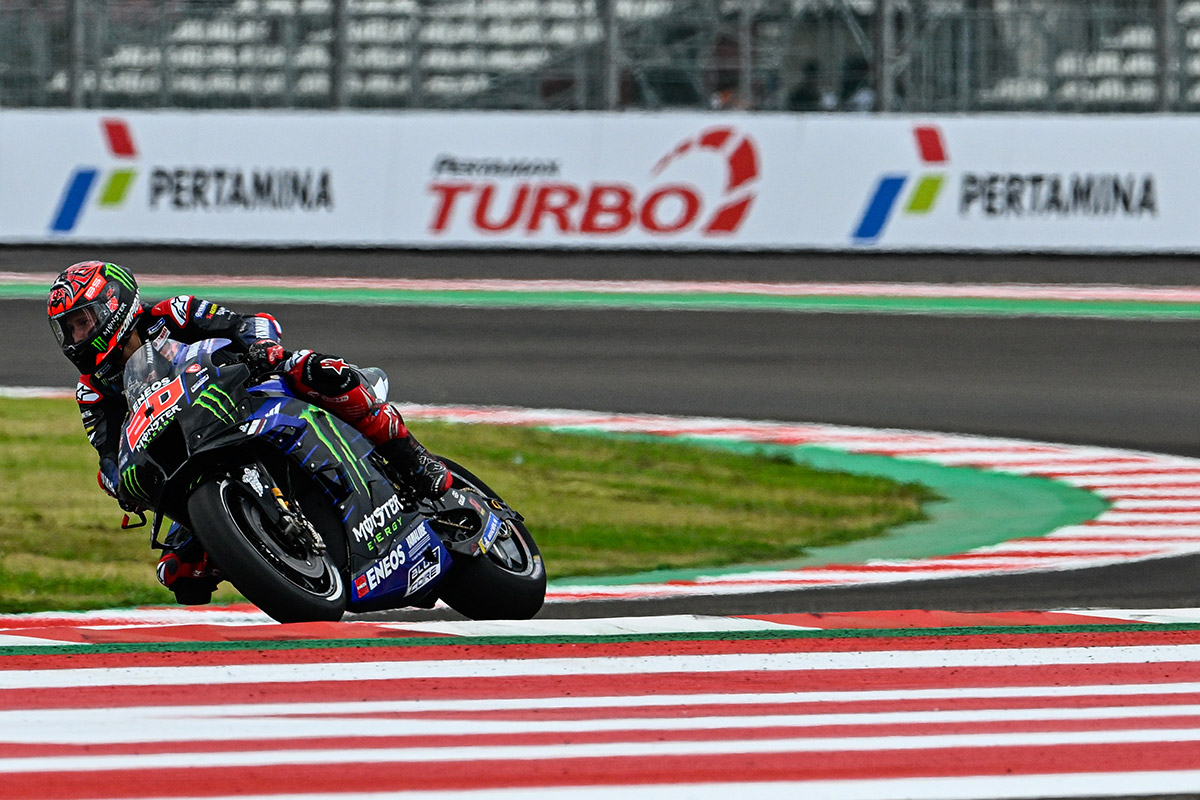 What a difference a week and a half makes! After a tougher Qatar GP than many expected, it’s a Monster Energy Yamaha MotoGP™ 1-2 at the end of Friday action at the Pertamina Grand Prix of Indonesia. Fabio Quartararo leads teammate Franco Morbidelli by just 0.030s thanks to a table-topping 1:31.608, with Johann Zarco (Pramac Racing) sitting in P3 heading into Saturday.

Mandalika Test pacesetter Pol Espargaro (Repsol Honda Team), 2020 Champion Joan Mir (Team Suzuki Ecstar) and 2021 runner up Francesco Bagnaia (Ducati Lenovo Team) all finished no higher than P20 too, as did eight-time World Champion Marc Marquez (Repsol Honda Team) as the number 93 suffered a fast crash in FP2, rider ok despite the excursion over the limit. So it’s all eyes to the sky ahead of FP3 as they look to improve…

FP1
After topping the test back in February, Pol Espargaro was fastest out the blocks thanks to a late 1:33.499. The Spaniard was a fitting 0.044s quicker than Miguel Oliveira (Red Bull KTM Factory Racing) and 0.079s ahead of Repsol Honda teammate Marc Marquez.

The premier class got plenty of slick tyre running under their belts on Friday morning, with the earlier heavy morning downpour forcing Moto3™ and Moto2™ onto wets but the Pertamina Mandalika Circuit already dry enough at the start of MotoGP™ FP1 for the riders to head straight out on Michelin slicks. Morbidelli and Zarco completed the top five in the opening 45-minute stint with good pace in the morning too, but just 0.9s split the top 10.

Aleix Espargaro (Aprilia Racing) suffered a technical problem, but there were no crashes.

FP2
It was far from an ideal start to FP2 for reigning World Champion Quartararo as the Frenchman encountered an issue with his YZR-M1 at the beginning of his third lap, but he was back out on track with 30 minutes to go. Meanwhile, Oliveira led the way in the opening exchanges from Marc Marquez and Jack Miller (Ducati Lenovo Team).

There was plenty of work for Sunday’s race underway in the middle part of the session, and there was just 0.8s splitting the top 20 heading into the final quarter of an hour of the day. Oliveira was still leading, but that soon changed as Quartararo set a 1:32.570 to go 0.137s clear of the Portuguese rider with 13 minutes left on the clock. And then began the custom FP2 mini qualifying attacks…

With five minutes to go, Jorge Martin (Pramac Racing) unleashed his first effort on a soft rear tyre – a 1:31.904, half a second quicker than Takaaki Nakagami (LCR Honda Idemitsu). But then Morbidelli and Qatar winner Enea Bastianini (Gresini Racing MotoGP™) got to within a tenth of Martin, before Zarco beat his Pramac Racing teammate to the top. Soon enough though, it was a factory Yamaha 1-2, with Quartararo leading Morbidelli by almost nothing as Bastianini and Marc Marquez both crashed in quick succession – riders ok.

That proved costly not only for Marc Marquez, but also for the riders pushing for their fastest lap times in the closing stages as yellow flags put paid to improvements. Bagnaia was visually frustrated coming back into pitlane knowing he’d missed the chance to grab an important top 10, and the Italian and plenty more will be hoping FP3 remains dry…

Provisional Q2 places
Behind the Yamaha 1-2, it’s a Pramac 3-4 as Zarco edges out Martin by just 0.011s. They’re the first of four Ducatis in a row as Bastianini completes the top five despite his late crash and Miller slots into sixth. Aleix Espargaro, Brad Binder (Red Bull KTM Factory Racing), Oliveira and Alex Rins (Team Suzuki Ecstar) are the final riders currently set to move through to Q2, with less than half a second covering the fastest 10 riders on Day 1.

If that wasn’t close enough, just 1.033s covers the top 20. With the late crashes and subsequent yellow flags, numerous riders will be praying that conditions on Saturday morning are good enough to allow for improvements. FP1 pacesetter Pol Espargaro, Marc Marquez, 2020 World Champion Mir and Pecco are just four of some key players looking for much more.

Jake Dixon (Inde GASGAS Aspar Team) has ended Friday at the Pertamina Grand Prix of Indonesia as the fastest rider in the Moto2™ class, and by some distance. The British rider’s 1:35.897 was a substantial 0.431s quicker than Celestino Vietti’s (Mooney VR46 Racing Team) effort in a dry FP2, with FP1 pacesetter Sam Lowes (Elf Marc VDS Racing Team) completing the top three.

FP1
Lowes dominated FP1 with a 1:44.439 in mixed conditions, with American Joe Roberts (Italtrans Racing Team) second but a whopping 1.043s behind. Tony Arbolino (Elf Marc VDS Racing Team) was third quickest on Friday morning, the Italian 2.4s off his teammate after Lowes switched to slicks late on to pull clear.

Qatar GP winner Celestino Vietti (Mooney VR46 Racing Team) and Jake Dixon (Inde GASGAS Aspar Team) rounded out the fastest five riders in the tricky conditions, the duo both over two and a half seconds down on Lowes.

There were no crashes in FP1.

FP2
After there were no crashes in the FP1 sessions in any class, three riders then went down early doors in Moto2™ FP2. Turn 2 caught out Filip Salač (Gresini Racing Moto2™) and Aron Canet (Flexbox HP40), before Pedro Acosta (Red Bull KTM Ajo) suffered a highside at the same corner moments later. All riders were ok, but Acosta had crashed under yellow flags while the marshals cleared Canet’s bike. The number 51 was given a Long Lap penalty for the race on Sunday for the infraction.

The session then settled down, with FP1 pacesetter Lowes a tenth clear of impressive rookie Manuel Gonzalez (Yamaha VR46 Master Camp Team) heading into the final 10 minutes of action on Friday. That soon changed, however, as Fermin Aldeguer (MB Conveyors Speed Up) leapt to P1. Dixon then moved the goalposts a further quarter of a second in his favour, before going 0.5s clear of compatriot Lowes on his next lap. Lowes, on a personal best lap, then crashed unhurt at Turn 10 – with Vietti snatching P2 off the British rider on his last flying lap.

Provisional Q2 places
Behind Dixon, Vietti and Lowes, Acosta ended the day in P4 but with a Long Lap in his name for Sunday. His teammate Augusto Fernandez ends Friday in P5, ahead of Aldeguer as the Boscoscuro was shuffled down to P6 in the end. Still, it was another strong showing from the reigning Moto2™ European Champion ahead of seventh place Albert Arenas (Inde GASGAS Aspar Team). Tony Arbolino (Elf Marc VDS Racing Team), Canet and impressive rookie Gonzalez complete the top 10 ahead of FP3.

Qatar GP race winner and Moto3™ World Championship leader Andrea Migno (Rivacold Snipers Team) topped the timesheets on Friday at the Pertamina Grand Prix of Indonesia, the Italian taking to the top in a dry FP2 to set the pace. Migno’s 1:40.960 was 0.273s clear of second place Carlos Tatay (CFMoto Racing PrüstelGP), the Spaniard leaping up into the top three on his last lap, while Dennis Foggia (Leopard Racing) slots in P3 after Day 1.

Heavy morning rain in Lombok ensured it was less than an ideal start to the Grand Prix for the lightweight class, but the riders were able to get plenty of laps under their belts nonetheless. Reigning Moto3™ Junior World Champion Daniel Holgado (Red Bull KTM Ajo) and Tatay rounded out the top five. Despite the difficult conditions, there were no crashes or incidents in the first session of the weekend.

FP2
Foggia led most of the session as the riders were able to get some much needed dry weather running in the bank after a damp FP1, but Izan Guevara (Gaviota GASGAS Aspar Team) was able to set a 1:41.385 to set a new benchmark time in the final 10 minutes – with rookie Scott Ogden (VisionTrack Racing Team) impressing to slot into P2. However, with a minute to go, it was all action in Mandalika and Migno slammed in the first sub-1:41 Moto3™ time of the day, that proving enough to hand the Italian bragging rights on Friday after teammate Alberto Surra had led the way in FP1.

Once again there were no crashes, but there was one technical problem for Tatsuki Suzuki (Leopard Racing).