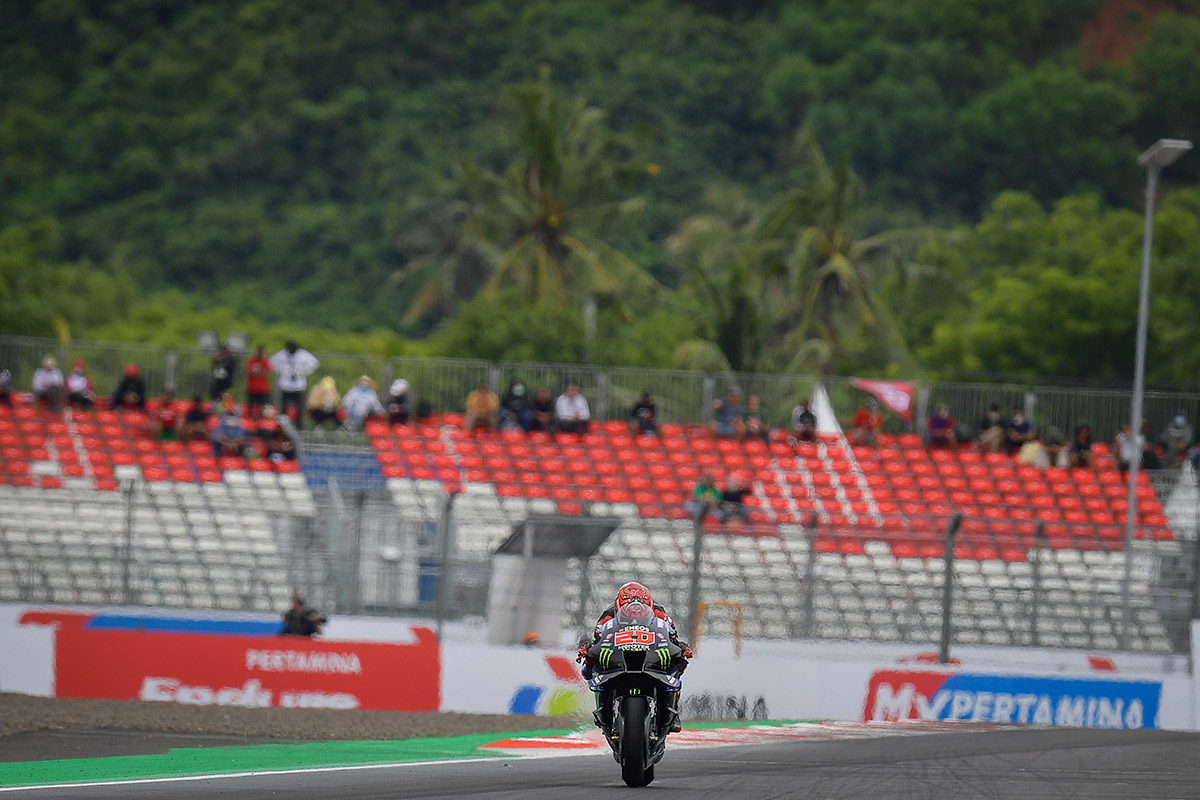 For the first time since the 2021 Catalan GP, Fabio Quartararo (Monster Energy Yamaha MotoGP™) will start a MotoGP™ race from pole position. After topping the timesheets on Friday at the Pertamina Grand Prix of Indonesia, the Frenchman kept it rolling in qualifying to underline the contrast between a difficult Qatar GP and a turnaround in Lombok. Alongside it’s Jorge Martin and Pramac Racing teammate Johann Zarco in P2 and P3, the former taking his first front row that wasn’t a pole position, and elsewhere there was plenty of drama.

Eight-time World Champion Marc Marquez crashed twice and didn’t make it out of Q1, Repsol Honda’s Pol Espargaro was just behind his teammate, and Joan Mir (Team Suzuki Ecstar) likewise suffered a damp squib, concluding with a crash and no place in Q2 for the 2020 Champion. But Sunday? Sunday is another day, and a shuffled grid should make for a spectacular showdown.

Q1
In a breath-taking Q1, eight World Champions were battling it out for the top two positions, including Repsol Honda Team duo Marc Marquez and Pol Espargaro, Francesco Bagnaia (Ducati Lenovo Team), and Mir. Bagnaia kept it cool, calm and collected to top the timesheets thanks to a 1.31.219, and the Italian avoided the chaos to give himself almost half a second in hand over a stunning session from Fabio Di Giannantonio in P2. The Gresini Racing rider becomes the first 2022 rookie to move through to Q2, with several heavy hitters falling by the wayside.

Marc Marquez pushed his RC213V to the absolute limits in order to find a time but crashed twice. First at Turn 13 before rushing back to the garage and back out, and then at Turn 12 after having overtaken Takaaki Nakagami (LCR Honda Idemitsu) on a last ditch push. Teammate Pol Espargaro will join him in down the pack, and so will Mir, with the 2020 Champion preparing to launch from P18 after a difficult qualifying that also ended in a crash.

Marco Bezzecchi (Mooney VR46 Racing Team) was right in the mix for a Q2 place and right up there in FP4, but a crash in the final sector put paid to those plans moments after he slipped out of the top two.

Q2
As Q2 began, both Bagnaia and Di Giannantonio crucially had two fresh soft rear tyres to throw on. Quartararo was the fastest rider once the first runs were completed though, a 1:31.227 proving the first benchmark, before his teammate Franco Morbidelli crashed unhurt at Turn 5. As the riders boxed for fresh rubber, it was a provisional front row of Quartararo, Bagnaia, and Martin. Aleix Espargaro (Aprilia Racing) was P4 ahead of Di Giannantonio and his teammate Enea Bastianini, meanwhile fellow Ducati star Jack Miller (Ducati Lenovo Team) had failed to set a time with six minutes to go.

Bagnaia came out for his second run and improved his time, but Quartararo was lapping quicker just behind. El Diablo set a blistering 1:31.067, Martin climbed to P2 to demote Pecco to P3, and then Miguel Oliveira (Red Bull KTM Factory Racing) grabbing P4. Next, Aleix Espargaro crashed at Turn 10 unhurt and the yellow flags came out to put paid to a few lap, but the incident was cleared in time for the riders to get one last shot at pole.

There was late movement on the timesheets too, Zarco, Brad Binder (Red Bull KTM Factory Racing) and Bastianini all put in their personal best times on the last lap to go P3, P4, and P5 respectively, pushing Bagnaia down to P6. No one was able to beat Quartararo though, and the Frenchman took his first pole since the 2021 Catalan GP.

The Grid
Behind Quartararo on pole and with pace, the Pramac duo of Martin and Zarco get ready to duel it out in a bid to outgun the Yamaha into Turn 1. Brad Binder’s late lap sees the South African spearhead Row 2, just ahead of Bastianini as the top two from Qatar start side by side in Mandalika. P5 for Bastianini is a good result for the Italian, and joining Binder and The Beast on Row 2 is Pecco – he’ll likely take that after having to deal with Q1.

Oliveira starts P7 ahead of Alex Rins (Team Suzuki Ecstar) and Miller. Aleix Espargaro had to settle for P10 after his crash and the Spaniard starts ahead of Di Giannantonio.

Morbidelli had qualified 12th but after qualifying had finished, the Italian was handed a three-place grid penalty for failing to comply with the notice given to all MotoGP™ teams regarding the staged practice start. That means Bezzecchi, Marini and Marc Marquez move up a position each on the grid, with Morbidelli now starting P15.

Q1
A trio of key names in the form of Ai Ogura (Idemitsu Honda Team Asia), Joe Roberts (Italtrans Racing Team) and Marcel Schrötter (Liqui Moly Intact GP) found themselves in Q1, and in the end none would end up progressing into Q2 either. Instead, it was Somkiat Chantra (Idemitsu Honda Team Asia), Bo Bendsneyder (Pertamina Mandalika SAG Team), Jeremy Alcoba (Liqui Moly Intact GP) and Simone Corsi (MV Agusta Forward Racing) who moved through to take part in the pole position battle.

Q2
Chantra came straight out in Q2 and went top of the timesheets in the early stages as Jorge Navarro (Flexbox HP40) and Cameron Beaubier (American Racing) took tumbles – separately – at Turn 2. Albert Arenas (Inde GASGAS Aspar Team) then also fell foul of Turn 2, with all riders ok but the yellow flags causing some laps to be cancelled.

Two British riders then climbed to the summit with five minutes to go, with Dixon leading Lowes by 0.154s and Fernandez on the provisional front row ahead of Chantra. Bendsneyder then pounced up to P5, as another rider then crashed at Turn 2. This time, it was reigning Moto3™ World Champion Pedro Acosta (Red Bull KTM Ajo) – rider ok. In the closing stages, there were very few improvers. Dixon held onto P1 to bag his first intermediate class pole position, with Fernandez then pipping Lowes and the two the only riders to get within 0.4s of the top.

The Grid
Behind Dixon, Fernandez and Lowes, Chantra claims a commendable P4 after coming through Q1. The Thai rider starts ahead of Bendsneyder and Arenas, who holds onto P6 despite his crash. World Championship leader Celestino Vietti (Mooney VR46 Racing Team) will launch from P7, and the Italian has compatriots Tony Arbolino (Elf Marc VDS Racing Team) and Corsi for company on Row 3. Acosta, meanwhile, starts from P10 – and the rookie has a Long Lap Penalty to contend with in the race. Beaubier and Fermin Aldeguer (MB Conveyors Speed Up) join Acosta on the fourth row in P11 and P12 respectively.

Q1
That Q1 saw many eyes on Aji, as well as Sergio Garcia (Gaviota GAGAS Aspar Team) as the 2021 title contender looked for a way through. Aji was the pacesetter heading into the final runs and Garcia crashed early to put himself under pressure for his, but by the end of the shuffle it was Garcia able to just pip the Indonesian to the top. They moved through, joined by Xavier Artigas (CFMoto Racing PrüstelGP) and Alberto Surra (Rivacold Snipers Team).

Q2
After coming through Q1 and seemingly in the groove, Aji led Q2 in the early stages from Ayumu Sasaki (Sterilgarda Husqvarna Max) and Dennis Foggia (Leopard Racing). But with track conditions improving lap by lap, the times were likewise improving all the time. Tatay went P1 with teammate Xavier Artigas slotting into P3, and Foggia then crashed at Turn 2 – the same place Riccardo Rossi (SIC58 Squadra Corse) went down earlier in the session.

Tatay then moved the goalposts to a 1:41.232, Artigas jumped into second and Foggia, recovering from his tumble, managed to put himself onto the provisional front row in third. But it wasn’t quite over, and rookies Moreira and Aji then crossed the line on their final laps to take front row starts and deny the veterans.

The Grid
Behind Tatay, Moreira and Aji, Artigas leads the second row in P4 ahead of Free Practice pacesetter and World Championship leader Andrea Migno (Rivacold Snipers Team), with Foggia forced to settle for P6. Garcia took P7 after recovering from his crash in Q1, and the Spaniard is joined on the third row by teammate Izan Guevara and Deniz Öncü (Red Bull KTM Tech3). Sasaki, Jaume Masia (Red Bull KTM Ajo) and Surra make up Row 4 and the leading 12 riders on the grid.