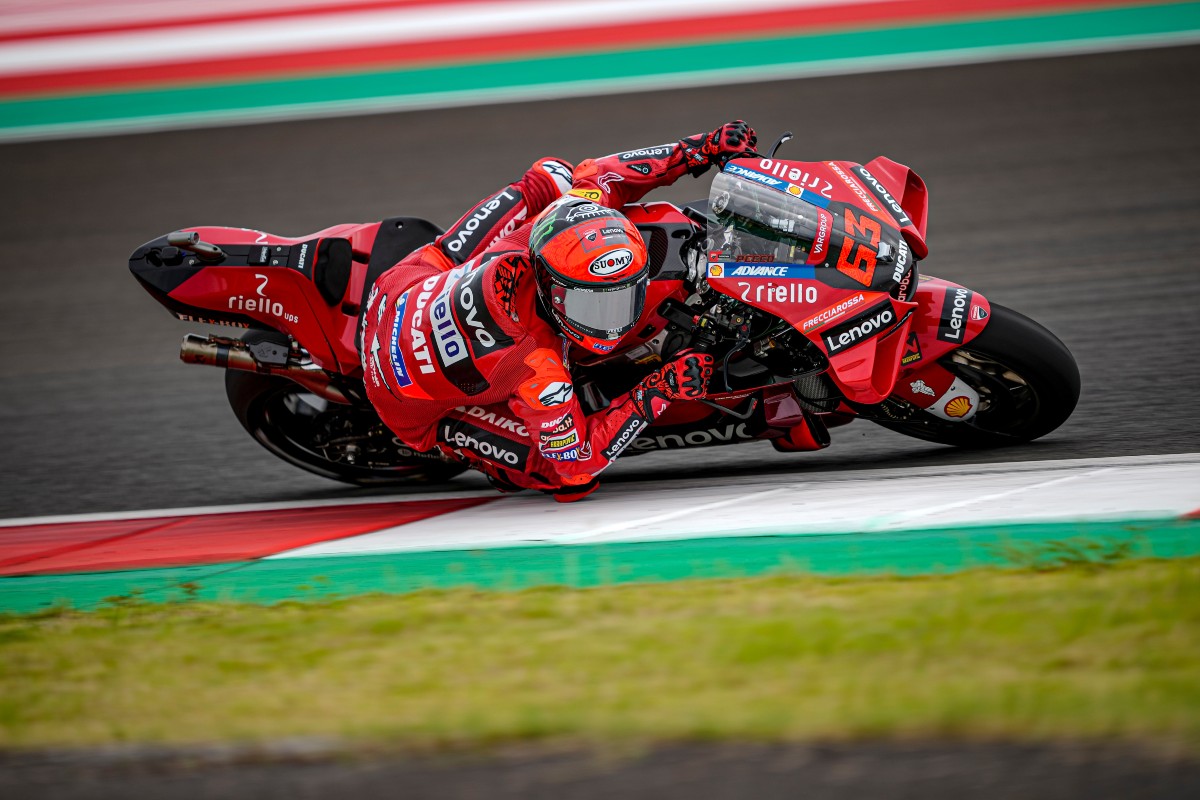 Francesco Bagnaia will start from sixth place, on the second row, in tomorrow’s Indonesian GP at the Pertamina Mandalika International Street Circuit in Lombok.

After finishing only 21st on Friday due to the yellow flags that prevented him from improving his lap time at the end of the day, Pecco hoped to have one last chance in this morning’s FP3 to gain direct access to Q2. Unfortunately, with the rain falling a few hours before the start of the session and the mixed track conditions, no rider was able to improve on their Friday lap times.

The Italian rider had to take part in Q1, where he could push his Desmosedici GP to set the fastest time in 1:31.219, gaining access to the second session of qualifying. In Q2, Bagnaia finished sixth overall, earning a second row start for tomorrow’s race. Jack Miller, who proceeded automatically into Q2 thanks to the sixth-fastest time in FP2 yesterday, finished ninth in qualifying and will start from the third row tomorrow.

In the Indonesian GP, there will still be two Desmosedici GPs starting from the front row with Pramac Racing Team riders Jorge Martín and Johann Zarco, respectively second and third in this afternoon’s qualifying session in Lombok. There will be seven Ducati riders departing from the first four rows of the grid.

As I have been forced to take part in Q1, I think sixth place in qualifying today is a good result. Unfortunately, in my last time attack attempt, I lost the rear for a moment at turn 11, so I couldn’t finish the lap properly. Anyway, I am happy; we did a great job, and I feel comfortable on the bike. It will be crucial now to analyse today’s data to understand which tyre to choose for tomorrow’s race. It will also be important to get a good start: today’s practice was positive, and tomorrow we’ll do another in the warm-up. But I am confident heading into tomorrow’s race.

I was hoping to do better in qualifying, but today it seemed impossible to put a complete lap together: I went off on the green line in my first “time attack” and had to abort my second attempt because of the yellow flag. Also, with the second soft tyre, I found the flags again, and in the last attempt, I found another rider on my trajectory so I couldn’t finish the lap again. We’ll see how it goes tomorrow: now we have to focus on the tyre choice for the race. In general, we know we have the same pace as the front guys, so it will be important to get a good start to have a chance to be with them from the beginning.

The Ducati Lenovo Team riders will be back on track tomorrow at 10:40am local time (4:40am Italian time) for the warm-up. The Indonesian GP will get underway at 3:00pm (8:00am Italian time) on a 27-lap distance.

#IndonesianGP
Get All Our Latest News Sent Direct To Your Inbox
Join 30,271 other subscribers.
Follow on Social Media
Get the VROOM Podcast