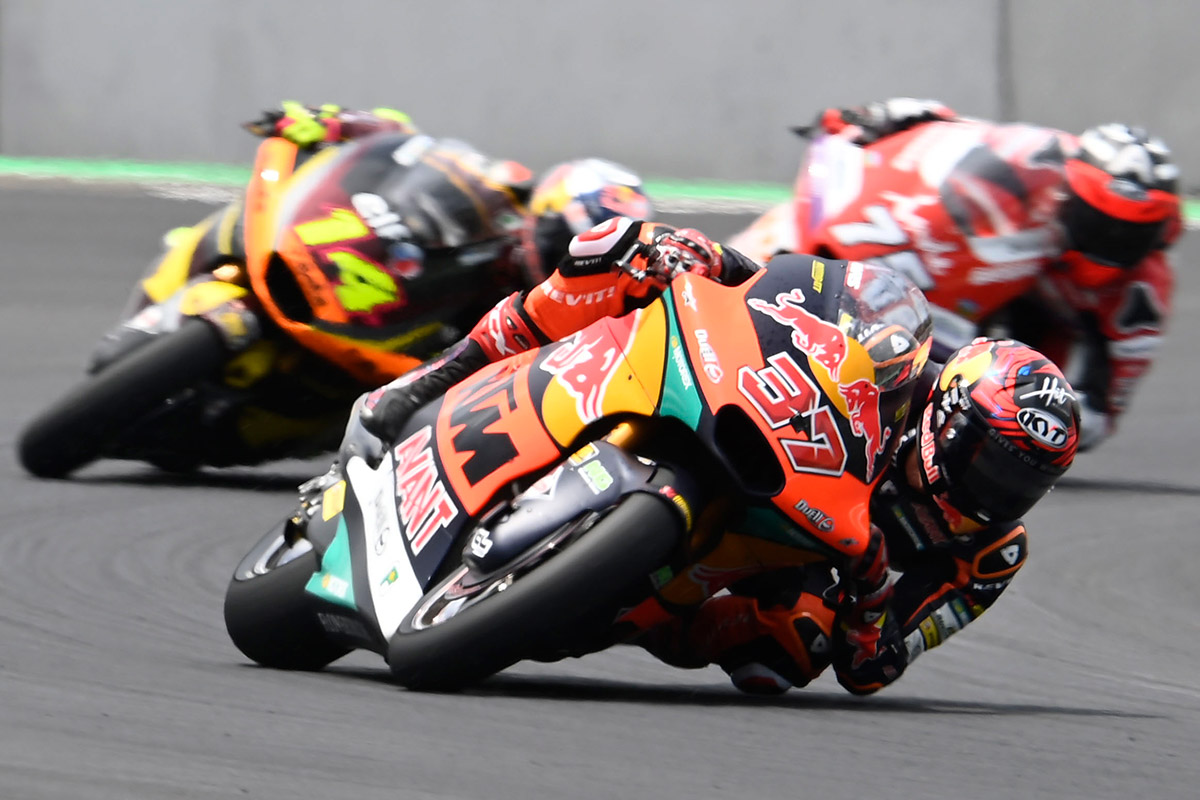 The first Moto2 race held at the Mandalika International Circuit was reduced from 25 to 16 laps, as a result of track conditions. Red Bull KTM Ajo faced a sprint in the Indonesian GP, in which they did their best to overcome suffocating heat and a few drops of rain in the first part of the contest. Augusto Fernandez finished in fifth position, after a tough start to the contest. Teammate Pedro Acosta was 9th, despite having to serve a long lap penalty along the way.

Fernandez, who took off from the front row of the grid, had a tough start and lost several positions, ending the opening lap in eighth place. The Red Bull KTM Ajo Moto2 rider pushed hard to recover but he lost contact with the front-runners in the race. The Spaniard gave his all to close the gap and managed to climb several positions, eventually taking the chequered flag at the Indonesian Grand Prix in fifth.

In contrast, Acosta had a very strong start, moving from 10th position on the grid to fifth on the first corner. In the early stages, he tried to push as hard as possible, although he would give up several places before serving his long lap penalty on Lap 4. The sanction was punishment for a crash under a yellow flag in the FP2 and sent him back to 15th position. He endeavoured to make a great fightback that led him to claim ninth.

After the second round of the 2022 season, Fernandez occupies 5th position in the Moto2 World Championship with 24 points. Acosta is 10th with 11. The Red Bull KTM Ajo duo will be back in action in two weeks for the Argentina Grand Prix, which takes place from April 1st-3rd.

#37 AUGUSTO FERNANDEZ
“I am happy to have picked up more points. However, today we wanted a little more. A few drops of rain began to fall from the start to the middle of the race, and that made me very conservative, as I thought the track would be slippery and it could be risky. In the end, I decided to push all the same, but two riders went down in front of me. When I picked up the pace, I matched the leaders and showed the speed that we’ve had all weekend, which proves that we could have been at the front. It’s a pity. Nevertheless, we finished in fifth position and in Argentina we will once again give 100% to get a good result.”

#51 PEDRO ACOSTA
“It was a long race, although not as physical as we had expected at the beginning. The long lap and having to overtake several riders made us lose a lot of time. However, my pace was good once again. We have to continue in the same way, learning and accumulating experience day after day and waiting for the results to come. We’ve put in some important kilometres that give us more experience in this class. In Argentina we’ll try again.”

#IndonesianGP
Get All Our Latest News Sent Direct To Your Inbox
Join 30,253 other subscribers.
Follow on Social Media
Get the VROOM Podcast