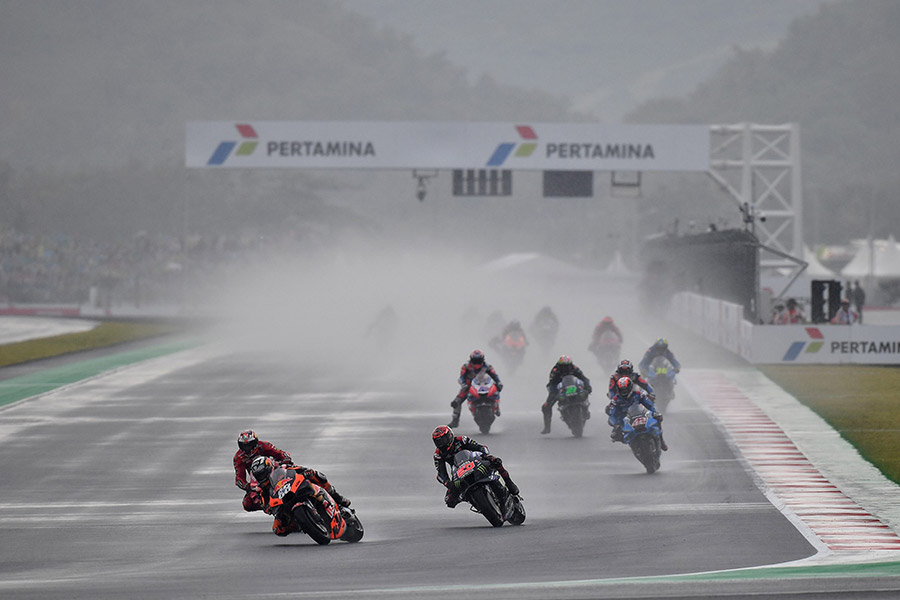 Miguel Oliveira took the chequered flag at a thrilling inaugural Pertamina Grand Prix of Indonesia ahead of Fabio Quartararo and Johann Zarco (Pramac Racing) in second and third places respectively, while at the same time battling high temperatures, wet weather and very difficult track conditions at the Mandalika Street Circuit in Lombok.

Tyre choice for the race was set to be difficult due to the lack of completely dry track time, and this was compounded by an FP4 session interrupted by a red flag incident. This in-turn meant that some teams didn’t get enough time to find bike settings that could extract the best performance from the MICHELIN Power Slick tyres.

However, following heavy rain before the scheduled start time, lining up on the grid for the delayed and reduced distance 20-lap wet race, slick tyre choice was not a consideration with all riders running the Medium compound MICHELIN Power Rain tyres front and rear.

With it being the first ever MotoGP race at this circuit, all records were set during the weekend. These began with the all-time circuit lap record of 1’31.067 set by Quartararo during Q2 on Saturday afternoon using Medium front and Soft rear MICHELIN Power Slicks.

On Sunday the new benchmark MotoGP race lap record, albeit a wet one, of 1’38.749 was set by Quartararo on lap 17 of the race while chasing Oliveira for the race lead.

Friday’s FP1 session began with slightly damp conditions following some very heavy morning rain showers, and the riders took to the track to take their first look at the conditions and the grip levels offered by the recently resurfaced parts of the circuit. In FP2, while the track was completely dry, the green and dirty asphalt meant that grip was still at a premium, but the riders fitted Soft rear slicks and went into time-attack mode to avoid getting caught-out by a potentially rain-affected FP3 session and missing the subsequent direct access to Q2.

Saturday’s FP3 session was damp as expected, and as a result Friday’s times were not bettered and the riders who posted the top 10 lap times in FP2 went straight through to Q2.

During the Q2 session, Quartararo’s Yamaha in pole position on the grid was joined by the Pramac Racing Ducatis of Jorge Martin and Zarco, who took second and third places on the front row alongside him. The hot pace of the weekend was indicated by the fact that just 0.656 seconds covered the top 10 places in this session.

Speaking after the race, Piero Taramasso, Michelin Two-Wheel Motorsport Manager, said: “I know there was a lot of talk during the weekend about the casing design of the new rear tyres in our allocation, but the fast lap times – equal to the best during the three day winter test – that we saw right from the start in all sessions has shown that this was the optimum, and more importantly the safest choice, for this new and challenging Mandalika circuit.

“During the race our MICHELIN Power Rain tyres worked very well for all teams and riders as is always the case, resulting in three different constructors on the podium, and fast and consistent lap times, even though they didn’t have much chance to test their 2022 bikes in wet conditions. On a more general note, I am very happy for the local fans that we managed to have a MotoGP race and give them an exciting show that they will remember for a long time.”

#IndonesianGP, michelin
Get All Our Latest News Sent Direct To Your Inbox
Join 30,271 other subscribers.
Follow on Social Media
Get the VROOM Podcast