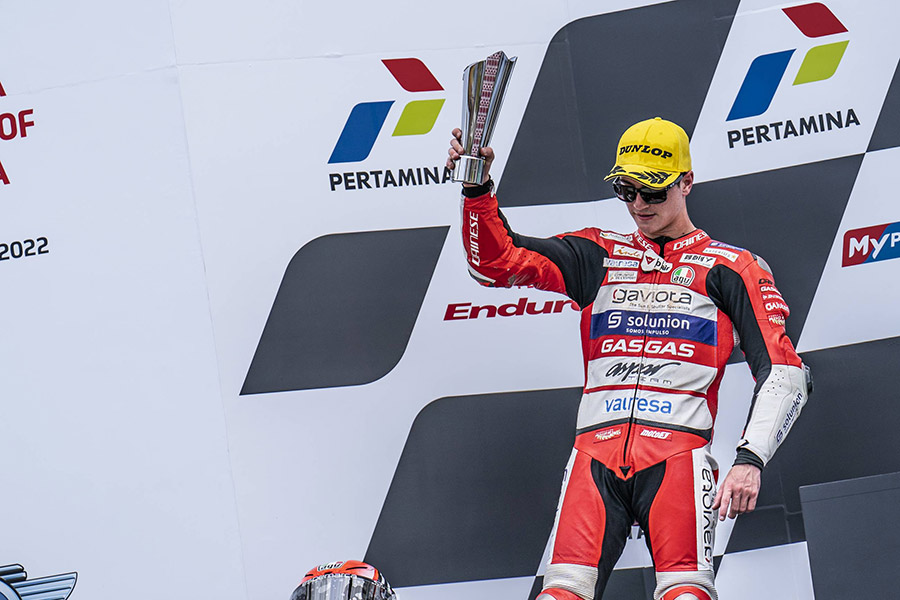 The Gaviota GASGAS Aspar Team has been on the podium again, for the second consecutive race this season, this time with an immense Izan Guevara, who has only been beaten by Dennis Foggia. Guevara finished second, offering the Aspar Team its 344th podium since Jorge Martínez “Aspar” debuted among the best at the 1983 Spanish Grand Prix. With his result and Sergio García Dols’ fourth position today in Indonesia after having finished also second in Qatar, the Gaviota GASGAS Aspar Team is the outstanding leader of the Team World Championship, and occupies the second and third position in the riders’ standings.

The Indonesian Grand Prix started with Sergio García in seventh position on the grid, just ahead of Izan Guevara. From the first moment, the Gaviota GASGAS Aspar Team riders have been at the top of the race and, after Dennis Foggia’s first push, they have led the chasing group. Both Guevara and García were one step above their rivals today and only Carlos Tatay’s final push to third prevented the team from getting both riders on the podium. The next appointment for García and Guevara will be the weekend of April 3 at the Argentina Grand Prix.

2nd Izan Guevara (+2.612):
“I’m, really happy for my first podium this year. Thanks to the team for all their work here at Mandalika in tough conditions. The pace was incredible as well as the battles in the group. In the last two laps I pushed and made it to P2.”

4th Sergio García (+3.759):
“A positive day and a good race where we pushed for the podium all the way. I felt strong on track but we missed acceleration and I had to give everything I had to be in that position. Anyway, these are important points for the championship and I’m happy.”

#IndonesianGP
Get All Our Latest News Sent Direct To Your Inbox
Join 25,263 other subscribers.
Follow on Social Media
Get the VROOM Podcast