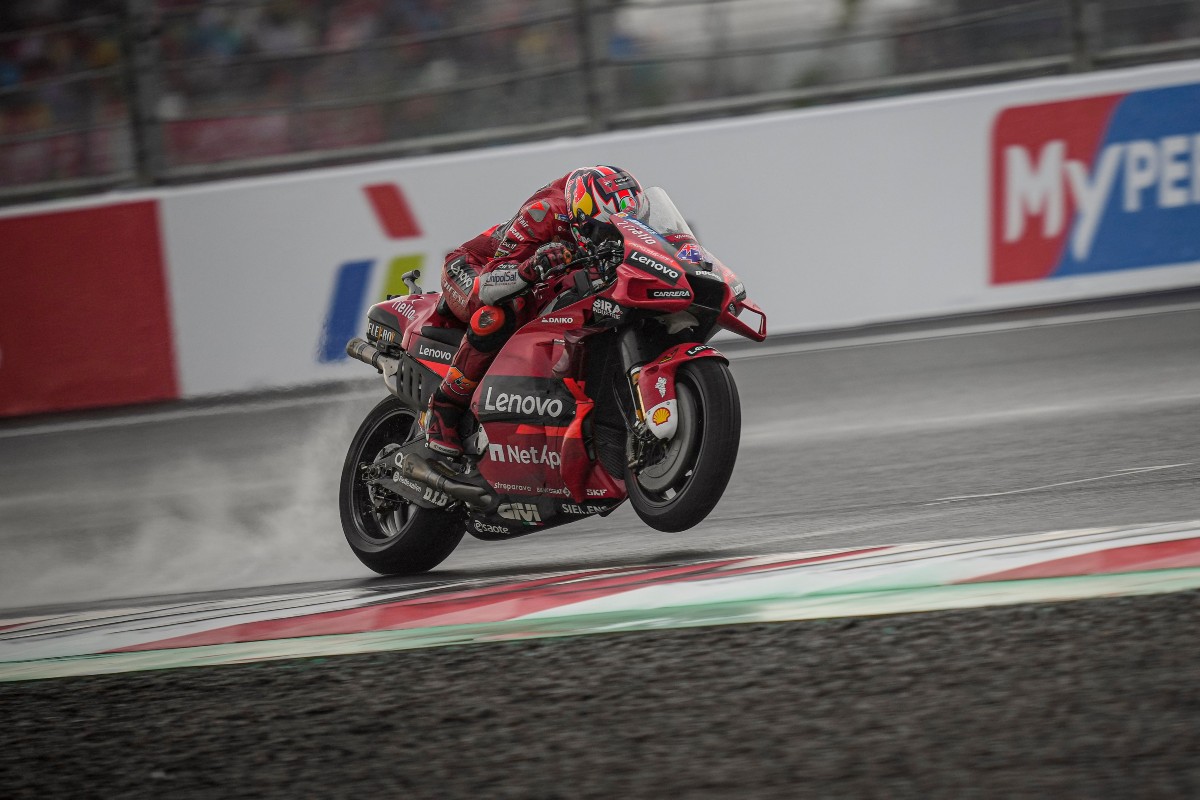 The MotoGP Grand Prix of Indonesia, held this weekend at the Mandalika International Street Circuit, started more than an hour late after a heavy downpour hit the island of Lombok just moments before the opening of the pit lane. The race eventually got underway at 16:15 local time, when the weather finally changed into a light rain.

Starting from ninth on the grid, Jack Miller immediately showed off in the early stages of the race as he took the lead on the second lap. However, the Aussie was unable to resist the pressure of his rivals until the end. As he was overtaken on lap four by Miguel Oliveira, Jack tried to defend his second position. Still, towards the middle of the race, he was first passed by Quartararo and then by fellow Ducati rider Zarco to finish the race fourth. With the 13 points gained today, Miller is now eleventh in the standings, 17 points behind leader Enea Bastianini (Ducati – Gresini Racing).

On the other side of the garage, Pecco Bagnaia was penalized by a bad start, which saw him drop down into twelfth place on the first lap. The Italian tried to make up some ground immediately, but the lack of feeling with the front of his bike prevented him from pushing as hard as he could. After taking a significant risk in the first corner, which forced him to go wide, Pecco continued to lose positions, eventually crossing the finish line fifteenth, gaining one point for the overall standings, which now sees him twentieth. After the first two Grands Prix of the 2022 season, Ducati is second in the constructors’ standings with 41 points.

Unfortunately, today, we didn’t have the pace to stay in front until the end. I got a good start, but I didn’t have much grip on the rear. Since we hadn’t ridden in the wet all weekend, we had to guess the right setup for those conditions, and we probably missed something. Throughout the race, my pace was consistent, and I managed to go a little faster towards the end, but when I reached my limit and realized I couldn’t do more, I preferred to manage the race and bring home a good result. All in all, it was a positive race, and we’ll try again at the next Grand Prix.

In the past, we have always been competitive in the wet, but today I didn’t really have a good feeling with the bike. I couldn’t brake the way I wanted to, and I couldn’t push. I’m disappointed because I had a great pace this morning in the dry, and we knew we had a good chance to aim for the top positions. Unfortunately, the weather was not on our side today, and in these first two races of the year, we have not yet been able to show our true potential. We hope to turn the tables at the next GP in Argentina.

The Ducati Lenovo Team riders will be back on track from 1st-3rd April for the Grand Prix Michelin of Argentina, the third round of the 2022 season, at the Termas de Río Hondo circuit.