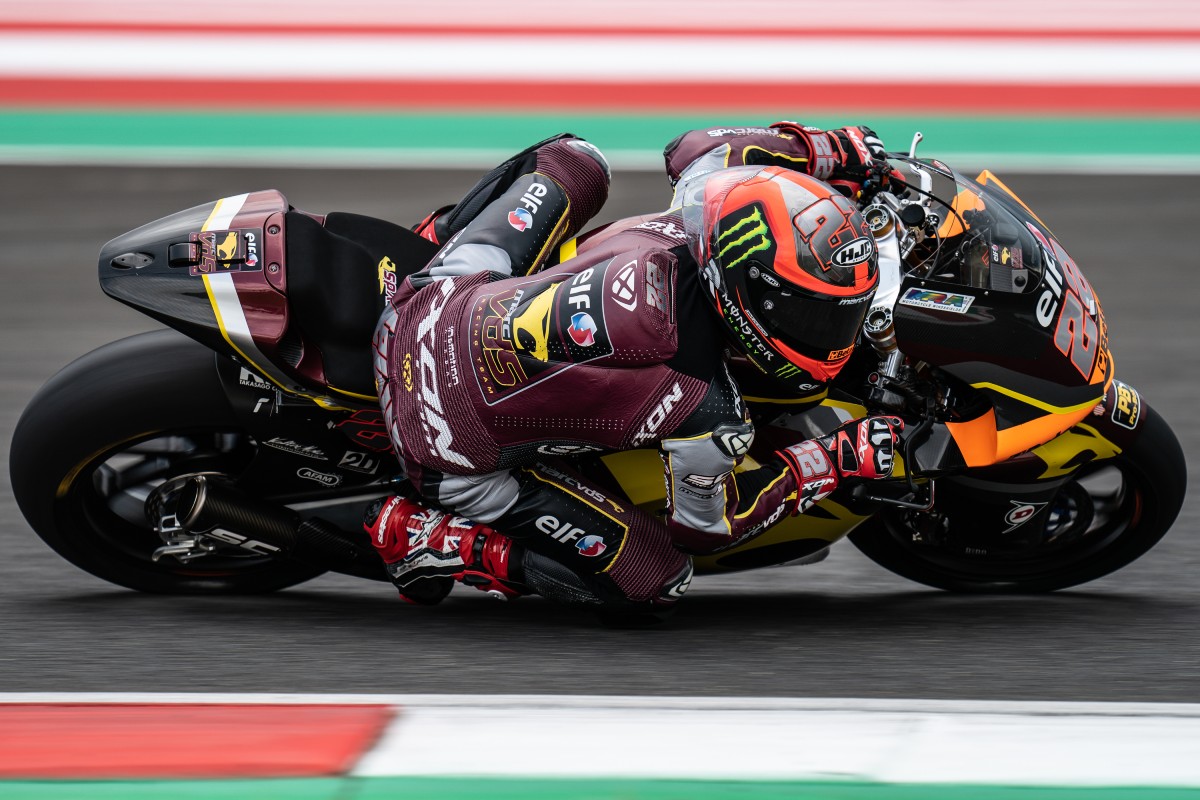 Sunday’s Moto2 race at the first GP in Indonesia for 25 years was reduced from 25 laps to 16 due to track conditions, with officials concerned about the surface at turns 2, 3 and 17 in the intense afternoon heat.

The rain shower forecast for Sunday afternoon just held off for the Moto2 event, meaning this was a dry race with some spits of rain. But conditions were punishing for Elf Marc VDS Racing Team riders Sam Lowes and Tony Arbolino as they faced track temperatures of 30 degrees and humidity of 72%.

Lowes lost places to Celestino Vietti and Aron Canet, but posted his personal best lap the eleventh time around – a 1’36.189 – to solidify fourth place in challenging conditions.

The race wasn’t the best but it was really important to finish and get some points. This weekend I felt a lot better on the bike. In the morning I had a step up in performance. In the race I had a different feeling. When it started to rain, I was not really aggressive and stayed quite relaxed. I saw another rider crash and it was more important for me to finish the race and get some points to give me something to build on – the opposite to 2021. I want to thank the team. The bike was good. It was another decent finish. That’s what it’s all about at the minute: using my head more in certain situations. When I saw it was difficult to go with Chantra and fight for the podium, I decided to finish fourth. I had a big gap behind. We’ll now go to Argentina and try and improve.

Arbolino lost two positions on lap one and was pushed back to tenth but soon started picking off riders ahead.

The Italian was soon in a fast four-rider fight for fifth, containing Augusto Fernandez, Ai Ogura and Fermin Aldeguer. After a strong fight, he came home eighth, 14s back of race winner Chantra.

Tony’s solid start to 2022 sees him leave race two seventh in the World Championship with 19 points.

The weekend has been great. We showed that we were so strong in wet conditions. In the dry we weren’t so slow. The speed was there. We just missed some details that were more or less the same like Qatar. We need to improve those things and then I can be really fast. We just need to keep working and keep believing that we can make a good season. We are constantly in the top ten. This is important and we can be much stronger. We’re growing and I’m sure that we will arrive at the front. I want to thank my crew. They did an incredible job. Let’s make a big step in Argentina in the direction that we want and we can make a great championship.