Solid performance by Masia and Holgado, 7th and 9th respectively in #IndonesianGP 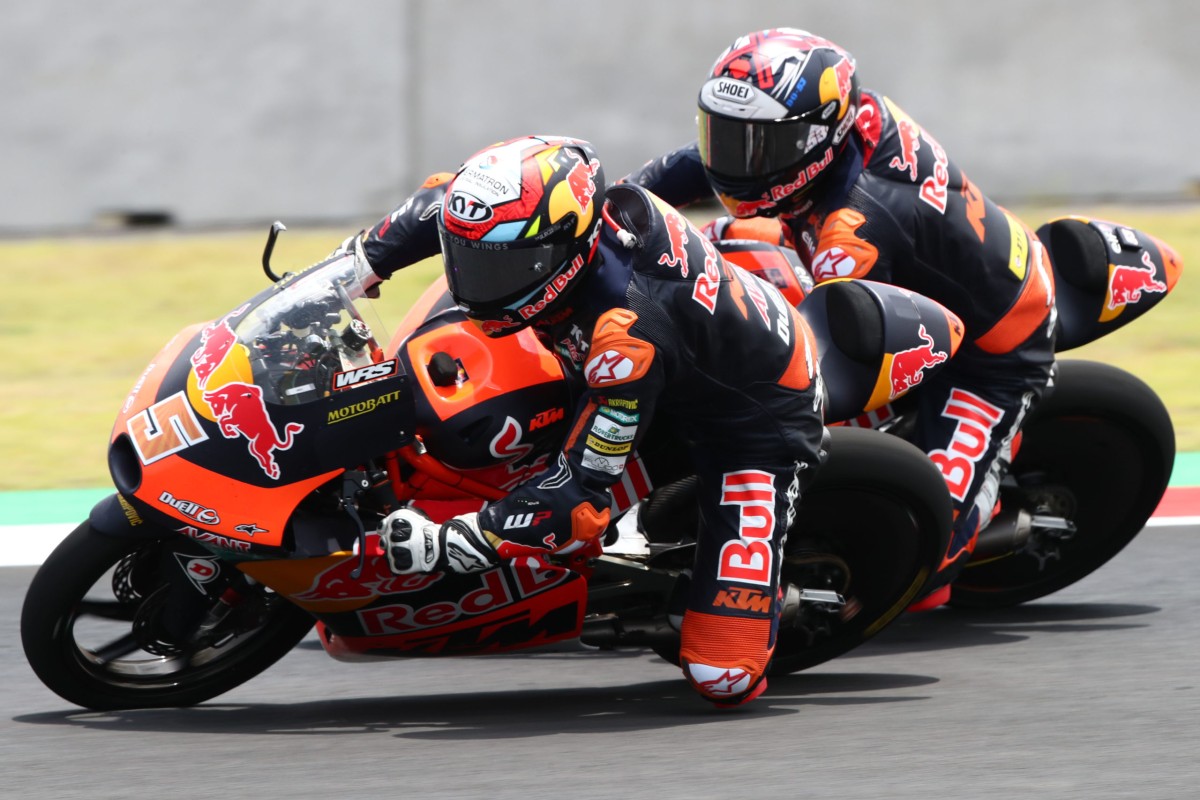 The Mandalika International Circuit hosted a round of the Moto3 World Championship for the first time on Sunday, with the Red Bull KTM Ajo riders putting in a great performance and battling in the group that decided the podium positions. After an intense finale, Jaume Masia placed seventh and scored important points. Team mate Dani Holgado claimed ninth, gaining significant experience in the tussle at the front.

Masia, who started from the fourth row, pushed to move up the order within the leading group, making it to fifth at the start of the seventh lap. After the leader managed to open an insurmountable gap, the Spaniard remained in the pack and pushed to the maximum for one of the remaining spots on the podium. Following an intense battle, the Red Bull KTM Ajo Moto3 rider finished seventh.

Holgado had a brilliant start to the race, going from 19th position on the grid to ninth on the opening lap. The Red Bull KTM Ajo Moto3 rookie joined the leading pack, continuing to climb places to complete the third lap sixth. Halfway through the contest, the leader escaped and Holgado remained battling in the chasing group, learning from fighting with some of the most experienced riders in the class. He completed an excellent showing with ninth position.

After the second round of the season, Jaume Masia occupies 12th place in the Moto3 World Championship with 9 points. Dani Holgado is 14th with 7. Now the Red Bull KTM Ajo will enjoy a week off before travelling to Termas de Rio Hondo, where the Argentina GP will be held from April 1st-3rd.

It has been a hard-fought battle, and we have given everything we have. I am happy with the performance we showed, as we were fast and competitive. We needed to manage the end of the race a little better, and this is something that we will work to improve at the next round. I want to thank the team for all their efforts throughout the weekend. In two weeks, we will try again at the Argentina Grand Prix.

I’m very happy. It was a fantastic race. It wasn’t easy, since it was hot, but we were able to manage the tyres and fatigue well. I feel satisfied because we finished the contest, which was the important thing, and we also fought for the podium positions. Taking into account our physical condition and the fact that it is only our second round with the team, we value it as positive. I want to thank the whole team for the incredible work they have done, for always supporting me and for encouraging me to do my best. I am really looking forward to the next GP in Argentina.

#IndonesianGP
Get All Our Latest News Sent Direct To Your Inbox
Join 30,246 other subscribers.
Follow on Social Media
Get the VROOM Podcast