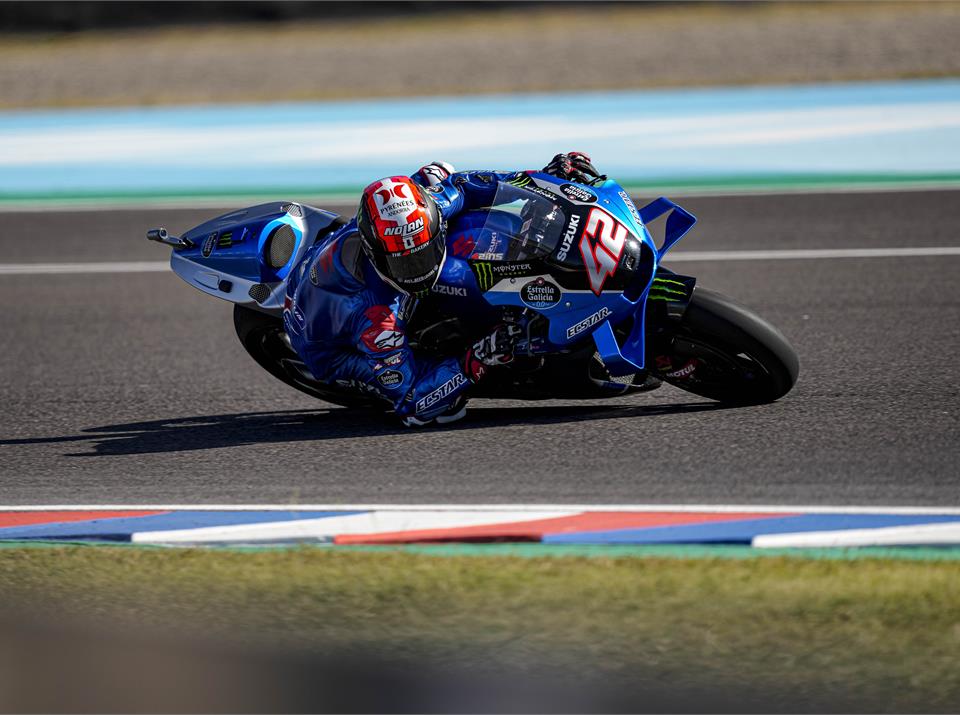 The MotoGP paddock’s return to the spectacular Termas de Rio Hondo circuit in Argentina was not a smooth one after freight delays meant the cancellation of all Friday’s sessions. However, the organisers, teams, and riders pulled together to run a full day of track action dubbed ‘Super Saturday’. For the MotoGP class this was made up of extended FP1 and FP2 sessions and the usual Q1 and Q2.

Alex Rins and Joan Mir, keen to get back on a track they both very much like, were unphased by the new schedule. The Suzuki duo looked promising from FP1 onwards, both placing well within the Top 5 for much of the session. The ultra-competitive field were only separated by small margins and the solid start gave Rins and Mir confidence.

The extra track time came in handy for FP2 where the riders could hone-in on base settings, tyre options, and refamiliarisation with the Argentinian terrain. The first half of the session was used for this race preparation before attention turned to time attacks. Both Rins and Mir were determined to keep their direct passage to Q2, something they achieved with relative ease, closing the session in sixth and seventh.

Mir lost a few minutes at the start of the short Q2 session when his number one bike failed to start, so he proceeded with his second bike for the remainder of qualifying.

Despite displaying good pace, Rins and Mir had to be content with seventh and eighth on the grid for Sunday’s unpredictable GP.

“I’m so happy to be back in Argentina, it’s a really nice track and I’m enjoying riding here. Today was a good day, even if it was a bit different to our usual Saturday! We were able to have nice FP1 and FP2 sessions. The only thing is that we’re starting from seventh tomorrow, which isn’t all that high on the grid, but I believe I have better pace than that and I’m very keen to get racing. I want to repeat my strong performances of the past in front of this great crowd.”

“Overall, it was quite a good first day here in Argentina because I felt pretty strong, and our base was improving. I was struggling a bit with grip and we made some adjustments to the settings, then it felt better. Some further steps were expected for qualifying on my first bike, but it failed to start and so I had to qualify with the backup bike, which was on the base settings. It cost me a bit in qualifying, I think I could’ve been quicker so I’m a bit disappointed. We seem that we’re far from the front, but my pace isn’t bad and that’s important. Tomorrow we’ll try to put everything together and do a good performance here.”

#ArgentinaGP
Get All Our Latest News Sent Direct To Your Inbox
Join 30,246 other subscribers.
Follow on Social Media
Get the VROOM Podcast