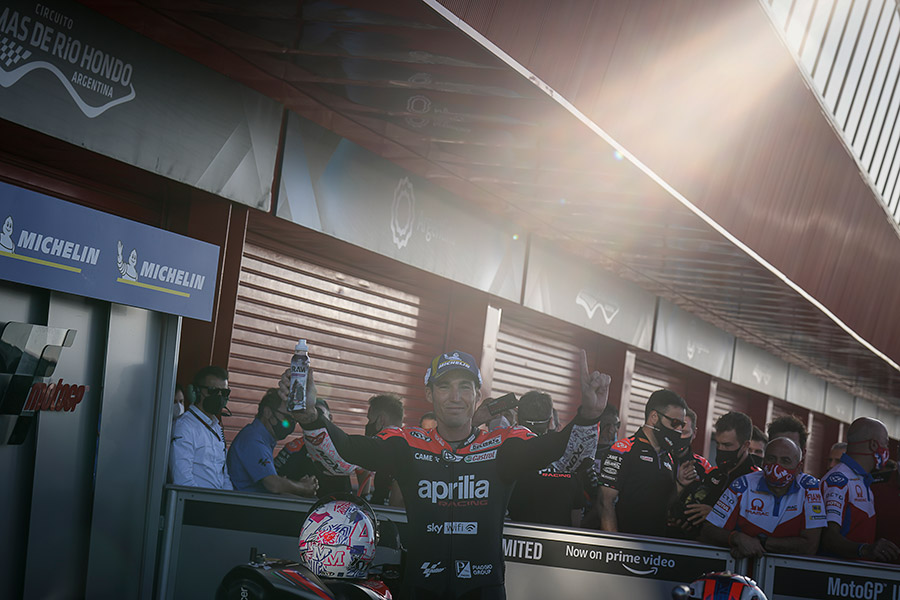 Aleix Espargaro (Aprilia Racing) is the toast of Noale as the number 41 made history for Aprilia at the Gran Premio Michelin® de la República Argentina, taking the factory’s first pole position in the MotoGP™ era thanks to a 1:37.688. It’s the Spaniard’s first pole position since the 2015 Catalan GP and third overall, each of which has been taken on a different motorcycle, which creates another first in the MotoGP™ era. Add to that, Sunday marks the number 41’s 200th premier class start.

Q1
Some of those shake ups were clear from the roll call in Q1, including Francesco Bagnaia (Ducati Lenovo Team), Pol Espargaro (Repsol Honda Team), Championship leader Enea Bastianini (Gresini Racing MotoGP™) and winner last time out, Miguel Oliveira (Red Bull KTM Factory Racing). Ultimately it was a Honda 1-2 moving through, with Pol Espargaro fastest from Nakagami and plenty looking for a Sunday comeback. There is, however, a much longer Warm Up to work with…

Q2
Q2 then burst into life, at east for 10 of the 12 riders as Pol Espargaro sat patiently in his box, and Joan Mir (Team Suzuki Ecstar) encountered an issue when trying to fire up his number one GSX-RR. There was frantic action inside the box to swap the tyres onto his second bike, but thankfully, Mir didn’t lose too much time.

Martin went P1 early doors. Jack Miller (Ducati Lenovo Team) grabbed P2 before the Australian tucked the front at Turn 1, rider ok, but it meant the yellow flags were out. Next up Aleix Espargaro went 0.3s clear at the summit to lay down a real gauntlet in Q2, with Quartararo P3 at the end of the first efforts behind Martin. Miller was P4, Johann Zarco (Pramac Racing) P5 and Marini P6, before Alex Rins (Team Suzuki Ecstar) pounced up to provisional P5.

So could anyone bridge the 0.3s gap for Aleix Espargaro in the final five minutes? Quartararo was certainly trying but came across Miller, who was on an out-lap, at Turn 7. That lap was then gone for a frustrated reigning World Champion, but there was movement elsewhere as Martin pulled out a beauty to go provisional pole.

Aleix Espargaro wasn’t done yet, however. The Aprilia rider was 0.2s under at the third split, and kept the red sectors rolling to the line for a momentous first pole position for Aprilia in the MotoGP™ era, beating Martin by over a tenth. Marini snuck onto the front row late on, Pol Espargaro made gains and Maverick Viñales (Aprilia Racing) adds a little more history for Noale in fifth.

The Grid
Aprilia head the grid for the first time ever, ahead of Martin on the hunt for his first points of the year and Marini enjoying an impressive second premier class start.

Pol Espargaro impressed with P4 after coming through Q1, and the Spaniard edged out compatriot Maverick Viñales by less than a tenth – so that’s P5 for Top Gun and his best qualifying result in Aprilia Racing colours. It’s also the first time with two Aprilias in the top five on the premier class grid.

Quartararo cut a slightly frustrated figure at the end of qualifying, and the Frenchman will start from P6, locking out the second row. Still, as MotoGP™ returns to Termas for the first time since 2019, it’s his best at the venue – and 22 places higher than one of the toughest weekends of his career in Moto2™ before that…

Rins and Mir go two-by-two for Suzuki on Saturday, with Johann Zarco (Pramac Racing) completing the third row of the grid. Nakagami rounds out the top ten as he returns to the fold, although the Japanese rider didn’t technically miss any track action after his delayed arrival to Argentina..

Miller wasn’t able to improve on his best time after his Turn 1 tumble, and the Australian finished P11. To add a little insult to timesheet injury however, for riding slowly on the racing line and disturbing Quartararo’s lap, the Australian has also been handed a three-place grid penalty.

Brad Binder (Red Bull KTM Factory Racing) was made to rue a mistake at Turn 7 that cost him a lap that was set to take him onto – at least – the front two rows, and the South African had to settle for P12 that becomes P11 after Miller’s penalty.

Tony Arbolino (Elf Marc VDS Racing Team) picked up his second front row start of the season in Termas de Rio Hondo at the venue where he took his maiden pole back in Moto3™.

Free Practice pacesetter Aldeguer then struck back to lead the way once more on Saturday, with just 0.019s splitting the two Spaniards at the summit. With three to go, Aldeguer extended his advantage to 0.150s with another fastest lap of the session, and that was that as no one could respond, securing some history for the number 54.

The Grid
Behind Aldeguer, Fernandez and Arbolino, heading the second row of the grid is Albert Arenas (Autosolar GASGAS Aspar Team) after his best Moto2™ qualifying yet, and the former Moto3™ World Champion has teammate Jake Dixon alongside him in P5. Vietti will be aiming for a third consecutive podium from P6.

Indonesian GP winner Somkiat Chantra (Idemitsu Honda Team Asia) recovered from a big FP2 crash to claim P7, and the Thai star has teammate Ai Ogura starting next to him on the third row, which is completed by Bendsneyder. Rookie Gonzalez impressed with P10, especially as the Spaniard managed to better both Lowes and second in the Championship Aron Canet (Flexbox HP40) in Q2.

Taiyo Furusato (Honda Team Asia), who arrives in the World Championship as 2021 Idemitsu Asia Talent Cup champion – undefeated all season – and the Red Bull MotoGP Rookies Cup, will start his first Moto3™ race from a couple of places behind teammate Aji. The Japanese rider was sidelined from Qatar and Lombok due to injury but was already making an impression in Q1.

Q2
Having made his way through Q1, Kelso made the extra 15 minutes of track time count in the early stages of Q2. The Australian sat top of the tree with a 1:48.940 after the first run out, a tenth faster than provisional second place Tatsuki Suzuki (Leopard Racing). World Championship leader Dennis Foggia (Leopard Racing) sat P3 halfway through the session, with 0.4s covering the top 13.

As ever, it all came down to a final push in the lightweight class, with everyone headin gout for one last flying lap. There were red sectors everywhere but Garcia made his final effort count to take pole by nearly two tenths, with Sasaki grabbing P2 on his last lap ahead of Guevara.

The Grid
Behind the GASGAS-Husqvarna-GASGAS trio, Rossi made good on his graduation from Q1 to leap up the timesheets and head the second row, with Kelso demoted from provisional pole for fifth but the Australian nevertheless enjoying his best qualifying yet. The same is true of Daniel Holgado (Red Bull KTM Ajo), with the reigning FIM JuniorGP™ Champion completing Row 2.

Xavier Artigas (CFMoto Racing PrüstelGP) leapt up to P7 on his last lap to front Row 3, and the Spaniard has Andrea Migno (Rivacold Snipers Team) and Suzuki for company. Diogo Moreira (MT Helmets – MSI) – another rookie inside the top 10 – continues to impress in P10, and the Brazilian has the experienced heads of points leader Foggia and Jaume Masia (Red Bull KTM Ajo), the only former Termas winner in the field, alongside him on the fourth row.