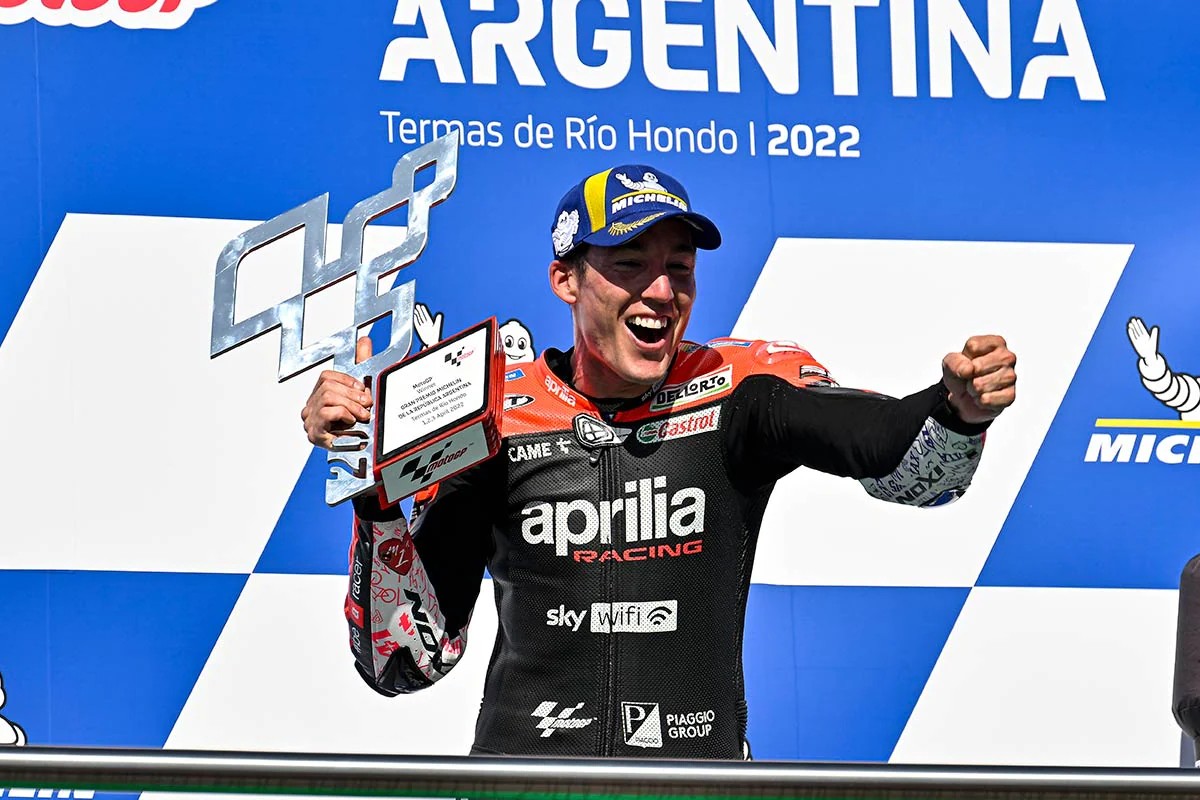 Aprilia triumphs in the Grand Prix of Argentina, taking its first victory in the MotoGP class along with Aleix Espargaró. For the Noale-based manufacturer, one of the most victorious brands in the history of motorcycle racing, this is win number 295 in World Championship GP Motorcycle Racing, the first in the new four-stroke era of the premier two-wheeler class after countless wins in the 125 and 250 cc categories.

A historic day that also crowns Aleix Espargaró on the day of his 200th GP in the premier class. As a true team captain, Aleix was the star of a weekend to remember, made up of a pole position, the win, and the fastest lap in the race. An unmistakeable sign of the outstanding level of competitiveness the 2022 Aprilia RS-GP has reached.

Thanks to this win, Espargaró is now leading in the overall rider standings with 45 points, further demonstration of a more than positive season start for the entire Aprilia Racing team which, at Termas de Rio Hondo, also saw Maverick Viñales taking home his best performance of the season after staying in the top five for quite a few laps.

I’m very proud of this milestone we’ve reached. We tackled a long path to get here, but we’ve finally done it! It was a fantastic weekend, but it wasn’t a simple race. In practice I was extremely fast, as well as in the warm-up session, but in the race I struggled a bit with a lack of grip. I didn’t lose heart. I tried changing the electronic settings several times to overcome these problems and, in the end, I managed to improve. I was faster than Martín by a few tenths, but it wasn’t at all easy to overtake him, partly because it was a new situation for me. I had never been in the position to battle for a win in MotoGP. It was truly exciting, especially the last lap. I am extremely happy for Aprilia, for me, and for my family. We deserve it. I would like to thank again all the team, who is working hard in Noale and the Piaggio Group for the support. Now we’re leading in the championship, but we’ll just try to take advantage of this positive moment, continuing to have fun and keeping our feet planted firmly on the ground.

Today’s result was a great one for all of us. I’m extremely happy for the entire team and for Aleix. We worked hard over the winter and we deserve it. I knew that Aleix could win because in practice he had demonstrated something more than all the rest. We were all hoping hard because this win is extremely important and it’s a great confidence booster for everyone. As for my race, I found myself battling with a lot of rivals, losing time with passes and counter-passes, and that also had an impact on the tyres. But I can’t complain. It’s great to be back in the top ten, especially because I think I could have finished even better. Plus, my pace in the race improved a lot and I found a good base feeling with the bike. In this race, we were seeking confirmation after the changes to the settings that we tried in the warm-up session in Indonesia, and we got it, so now I’m convinced that we’ll be able to improve even more from here on out.