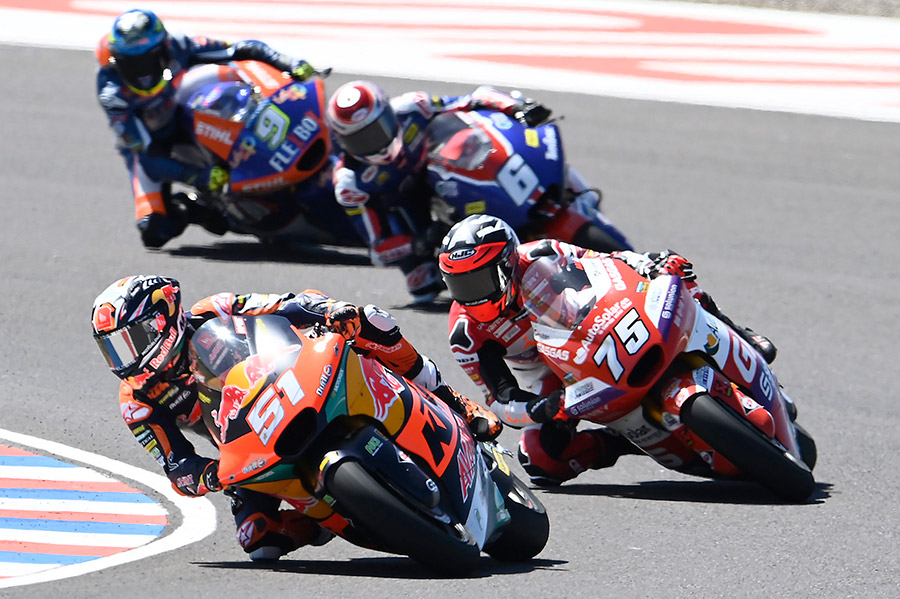 Red Bull KTM Ajo Moto2 brought an end to an intense Argentina GP on Sunday, which began with the cancellation of on-track activity on Friday due to logistical problems and ended with mixed fortunes for the team’s riders. Pedro Acosta made a good comeback, gaining ten positions to finish seventh at a new circuit for him, in his third contest in the class. Augusto Fernandez had a tough day, unable to conclude the round after suffering a crash at the start.

From the sixth row of the grid, Acosta got off the line well and overtook six rivals, moving from 17th place to 11th. The race broke up very early, so the Spaniard did not have a chance to catch up with the group at the front, but the reigning Moto3 World Champion made every effort to hunt down and overtake those ahead of him, maintaining an intense battle with several riders. Finally, Acosta placed seventh, in an important experience at an unfamiliar track.

After proving to be one of the most competitive riders on Saturday, Fernandez started from the front row of the grid, in second position. Unfortunately, he did not begin the race well, and went down at the opening corner after colliding with another rider. Unable to re-join the contest, his day ended prematurely.

Fernandez now occupies the 7th position in the overall standings with 24 points. Acosta is 8th with 20. Next up is the Americas GP, which will take place at COTA from April 8th-10th.

#37 AUGUSTO FERNANDEZ
“It was a shame to finish the race this way and so soon. We made a bad start; I had problems putting the gear in, and that caused us to get into trouble on the first corner. There was contact with another rider and I went down, without being able to do anything about it. I feel bad because we haven’t been able to take advantage of all the potential we had shown here, since we were having a very strong weekend and we could have fought for the victory with the pace that we had. Nothing is over because we haven’t taken points at a round and, luckily, we have another opportunity next week. We have to take away the positives as we are still up there and are strong, we just need to finish it off in the race. I want to thank the team for all their work on this unique weekend, which has been hard for everyone. I’m sorry I couldn’t repay them for it with a good result. Now we are already thinking about Austin.”

#51 PEDRO ACOSTA
“We had a good race. We have found something that I am sure will help us for the rest of the season. I felt comfortable on my bike again, just like at the pre-season test in Portimao. We have taken a step forward, we have a great feeling back and, in addition, our pace was strong, so, in general, it has been a positive Sunday. Now it is time to look forward to the Grand Prix of the Americas, where we will put into practice everything we have learned here and try again.”