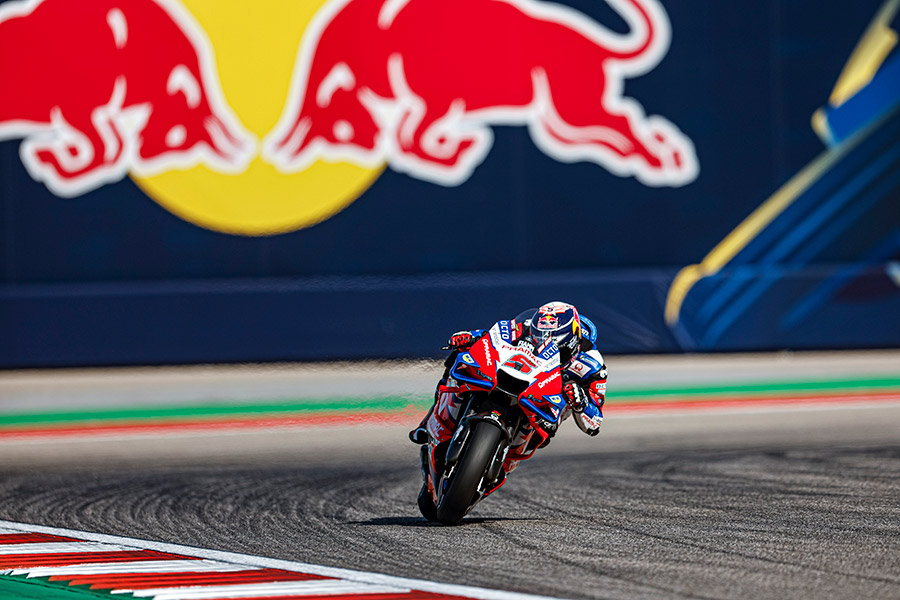 A silky smooth lap at the end of FP2 handed Johann Zarco (Pramac Racing) the number one spot on the timesheets on Friday at the Red Bull Grand Prix of The Americas. The Frenchman’s 2:02.542 was enough to beat Jack Miller (Ducati Lenovo Team) by 0.247s to earn himself some breathing space, with reigning World Champion Fabio Quartararo (Monster Energy Yamaha MotoGP™) completing the top three.

Elsewhere, the returning Marc Marquez (Repsol Honda Team) ended Day 1 in sixth, whereas World Championship leader Aleix Espargaro (Aprilia Racing) sits outside the top 10 – with work to do for the Argentina GP race winner in FP3 to move through into Q2.

FP1
Some fantastic pace in the final handful of laps saw Alex Rins (Team Suzuki Ecstar) end FP1 as the fastest rider on track, but only 0.008s split the Spaniard from compatriot Maverick Viñales (Aprilia Racing). Rins’ 2:04.007 benchmark was over four tenths clear of third place Miller though. He had encountered an issue with his GSX-RR with about 20 minutes to go and then had to pit for fuel on his second bike, but that didn’t stop the 2019 Americas GP winner.

Quartararo began his weekend with a P4, the Frenchman 0.443 behind Rins in the opening 45-minute stint, with Marc Marquez’ return getting off the ground with a very solid P5.

Pol Espargaro (Repsol Honda Team) crashed unhurt at Turn 18 in the early exchanges of the session, and then he too had a technical issue at the end of the session.

FP2
FP1 table topper Rins was the first rider to stick some fresh soft rear Michelin rubber in with 22 minutes to go, and his time was a 2:03.030 – half a second faster than anyone else. Miller had sat P1 after a flurry of riders set their personal best times in the early stages of the session, including Enea Bastianini (Gresini Racing MotoGP™), Viñales and Francesco Bagnaia (Ducati Lenovo Team), but with 20 minutes to go, there was a new benchmark thanks to the number 42 Suzuki.

Bagnaia then took over in second before Joan Mir made it a Team Suzuki Ecstar 1-2 with four minutes left on Friday. But the red sector times were starting to light up the screen. Marc Marquez slotted into P2 as Miller returned to top spot by 0.2s, with Viñales going P4. All of a sudden though, it became a leading trio of Ducatis as Zarco set the best time of the day, with Bastianini going P3 behind Miller too.

Quartararo soon hit back to take third, although the Frenchman was nearly three tenths away from countryman Zarco. And that’s how it stayed by the time all the riders had taken the chequered flag; Zarco fastest from Ducati stablemate Miller and Quartararo.

Provisional Q2 places
Behind the top three, Bastianini had a good day at the office to finish P4, the Italian just 0.3s shy of Zarco’s pace, with Rins shuffled down to P5 by the end of the session after going early on his soft tyre strategy.

Marc Marquez’ sixth on his return to MotoGP™ action was an interesting one, and we saw a happy Viñales at the end of Day 1 – P7 for Top Gun. Mir, after briefly sitting P2, is currently heading into Q2 in P8 ahead of Bagnaia and Jorge Martin (Pramac Racing) – the two GP22 riders rounding out that all-important top 10.

That means Aleix Espargaro has work to do in FP3 if he’s to grab an automatic place in Q2 in Austin, with the Spaniard missing out by a slender 0.015s. Pol Espargaro (Repsol Honda Team) and Brad Binder (Red Bull KTM Factory Racing) – the leading KTM on a tough day for the factory – are the only other riders within a second of Zarco’s scintillating time, down in P12 and P13.

Fermin Aldeguer (MB Conveyors Speed Up) continues to impress in Moto2™ this season as the Spaniard ended Day 1 at the top of the timesheets at the Red Bull Grand Prix of The Americas. Aldeguer set a 2:09.155 in the second Free Practice session to beat Tony Arbolino (Elf Marc VDS Racing Team) by just 0.046s, with Cameron Beaubier (American Racing) beginning his home GP with a P3 overall on Day 1.

FP1
Despite a late crash, Augusto Fernandez (Red Bull KTM Ajo) topped FP1 with a 2:10.489, a time good enough to beat Beaubier by 0.036s. Arbolino was also fast first time out, rounding out the first top three of the weekend.

Aron Canet (Flexbox HP40) and Sam Lowes (Elf Marc VDS Racing Team) completed the top five, the duo were the only other riders to get within half a second of pacesetter Fernandez.

FP2
It was a closely fought FP2 session, with every rider bar one going quicker than they did in the cooler FP1 conditions. The fastest times of the day came at the end of the session, with Aldeguer eventually pipping Arbolino to P1 on his final flying lap. Beaubier also set his personal best lap on his final time attack effort to climb into the top three.

Home hero Sean Dylan Kelly (American Racing) headed to the medical centre for a check-up after a crash in FP2, thankfully he was later declared fit, as we also saw a crash for Gabriel Rodrigo (Pertamina Mandalika SAG Team) – he too went to the medical centre and will be reviewed before FP3.

That FP3 will be a vital session for Vietti after home favourite Joe Roberts (Italtrans Racing Team) knocked the Italian out of the top 14, so make sure you tune into that on Saturday morning before qualifying from 12:35 (GMT -5).

Dennis Foggia (Leopard Racing) flexed some speed on Day 1 at the Red Bull Grand Prix of Americas, pulling clear by more than three tenths ahead of compatriot Andrea Migno (Rivacold Snipers Team). Third was an impressive push from Daniel Holgado (Red Bull KTM Ajo) as the Spaniard starts to stake his claim on some serious pace in his rookie season.

FP1
Migno set a 2:16.241 in  FP1 to start the day on top of the timesheets, ahead of second place Foggia. The Leopard Racing rider was 0.382s down on Migno’s best effort, while Carlos Tatay (CFMoto Racing PrüstelGP) completed the top three.

FP2
2:15.440 from Foggia put him on top in FP2 as he turned the tables on FP1 pacesetter Migno by a similar 0.384s. Reigning FIM JuniorGP™ World Champion Daniel Holgado (Red Bull KTM Ajo) climbed into the top three with a late lap in the afternoon session, the rookie seriously impressing on first touch with COTA.

Lapping alone at the end of FP2, Foggia was able to briefly sit 0.7s clear, but Migno did slightly reel him in at the end of the day. Only five riders lapped within a second of Foggia though, with the Italian stamping his authority on Austin on the opening day of action as only he and Migno set sub 2:16 lap times.

Provisional Q2 places
Behind Foggia, Migno and Holgado, Jaume Masia (Red Bull KTM Ajo) is fourth fastest on Day 1 and having missed most of FP1.

Deniz Öncü (Red Bull KTM Tech3) strung together a great FP2 to claim P5, with Kaito Toba (CIP Green Power) in P6 as the final rider to get within a second of Foggia’s blistering time. Tatay suffered a heavy crash at Turn 18 in FP2 but the Spaniard was unhurt and ended the day in P7, he leads Tatsuki Suzuki (Leopard Racing), 2021 COTA winner Izan Guevara (Gaviota GASGAS Aspar Team) and Ayumu Sasaki (Sterilgarda Husqvarna Max) inside the top 10.