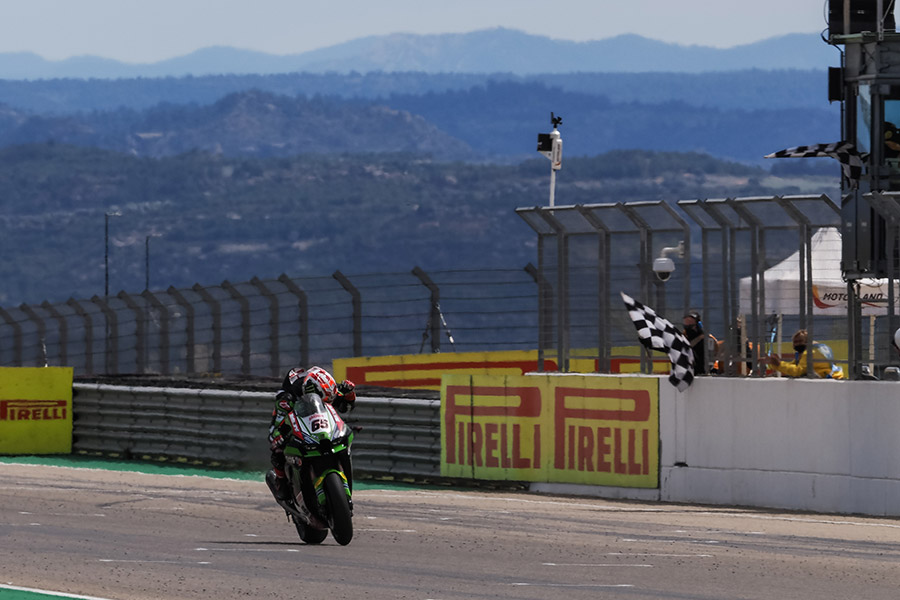 Jonathan Rea (Kawasaki Racing Team WorldSBK) claimed his first win of the 2022 MOTUL FIM Superbike World Championship season. It’s the fifth time of his career that he has won the season-opening race. Rea was able to defend the victory from Alvaro Bautista (Aruba.it Racing – Ducati) and Toprak Razgatlioglu (Pata Yamaha with Brixx WorldSBK) despite the Ducati rider trying to make a move into the final two corners: “I had to work as hard I’ve had to for a long time. It was such an exciting race. I knew it was going to be tough from the beginning with both Toprak and Alvaro. We were right on the border line with the tyre choice. I was not really sure. Honestly in the past, we’ve never made the SCX tyre works in these kinds of conditions. I was able to manage pretty well.”

Bautista crossed the finish line in second just 0.090s behind the winner and claimed his first podium with Ducati since Losail 2019. He had a great start getting the holeshot into Turn 1. After battling with both Razgatlioglu and Rea, Bautista had a huge moment which allowed Rea back through into Turn 1 at the start of Lap 10.
The Spanish rider managed to stay in the fight for victory until the last two corners as Rea claimed victory: “Fighting again for the top positions again after the last two seasons was very important for me. With Jonathan, I passed him many times, but I didn’t want to risk much more. I tried to until the last corner because I could overtake him on the long straight but then I missed a lot of acceleration in every corner and especially in the last corner he could close a bit better the line.”

Reigning WorldSBK Champion Razgatlioglu was in third place 5.4s behind Rea: “It has not been an easy race for me. After my pole position, I tried my best. I was fighting for the win in the first laps. But during the last nine laps, I started to dropped positions. My front tyre was dropping, and I started sliding. Tomorrow, I’ll try again to fight for top positions.”

Michael Ruben Rinaldi (Aruba.it Racing – Ducati) was fourth in Race 1 as he finished around five seconds back from Razgatlioglu. The Italian had been fighting in the lead group in the first half of the race but soon found himself on track on his own: “In the end, fourth place is a good result. I struggled all the race to ride the bike, so we have to improve the settings of the bike, especially turning because I struggle when the tyre drops, and I have less grip. I was able to stay with the top guys for half of the race but then I could not risk too much.”

Andrea Locatelli (Pata Yamaha with Brixx WorldSBK) claimed fifth place as he finished five seconds behind Rinaldi: “This track is not easy for us. We need to work a little for tomorrow to try to stay close and to try to be on the podium.”

Iker Lecuona (Team HRC) completed the top six in his first WorldSBK race: “Really good start here in Superbike. I didn’t expect this sixth position. The goal was to be P7 or P8. The pace I had in the first laps, I was not expecting it. I learned a lot during the race. I tried to follow Locatelli, but he was faster than me. The bike has lot of potential. We need to work and keep improving.” Teammate Xavi Vierge finished in seventh place on his WorldSBK debut.

Lorenzo Baldassarri (Evan Bros. WorldSSP Yamaha Team) took his first WorldSSP victory on his debut in the category. He became the seventh rider to win on their debut, following the path of 2020 WorldSSP Champion Andrea Locatelli who had won his first race. While fighting for the win with Aegerter, Baldassari had a major save after almost losing the front of his bike at the final corner of the final lap: “In the last corners, I risked two times to crash and then in the last corner I completely lost the front. In the end, I recover the bike and I passed Dominique. I don’t know how we managed not to crash. It was a great start of the season for sure.”

Dominique Aegerter (Ten Kate Racing Team) claimed second position after having lost precious time in an incident with Baldassari in the last corner of the race: “The last corner was critical, and we were fighting until the end. Baldassari lost the front, touching me a little bit on my shoulder. I went off the track and could go on and finish second. These 20 points are nice to take.”

Can Oncu (Kawasaki Puccetti Racing) completd the podium in third as he finished 5.7s ahead of Glenn van Straalen (EAB Racing Team): “I’m happy. I tried my best, but I did some mistakes. The team did a great job. During the test, we had a big problem and they managed to found solution. I’ll try to do better results tomorrow.”

Rookie Nicolo Bulega (Aruba.it Racing WorldSSP Team) finished in fifth place for his first race in the category as the Ducati Panigale V2 made its WorldSSP debut. Niki Tuuli (MV Agusta Reparto Corse) completes the top six for the new MV Agusta F3 800 RR after a strong showing, just a second away from Bulega. With Stefano Manzi (Dynavolt Triumph) claiming seventh position, all five manufacturers on the 2022 grid finished inside the top seven for the official debuts of the Supersport “Next Generation”.

Starting form pole position, Marc Garcia (Yamaha MS Racing) took the first win of the 2022 FIM Supersport 300 World Championship. The Spanish rider claimed his first win since Magny-Cours 2020. Garcia won from pole position and claimed the fastest lap, becoming the first rider to score a pole-fastest lap-win hat-trick since Ana Carrasco at Donington Park in 2018. “It was an amazing day. Pole position and then the race was perfect. It was a bit difficult to manage the big gap, I tried to stay always in the same lap time, and I hope to repeat tomorrow.”

Alvaro Diaz (Arco Motor University Team) finished in second place, claiming his second podium in the category after Barcelona ’21; “I’m very happy. The race was very difficult because of the wind. This is my first podium of the season in WorldSSP300, so I’m very happy. It was difficult to ride on my own, in the last two laps I did some mistakes and I think it’s more difficult to finish the race because it’s difficult to stay focus. Tomorrow, I think I can fight for the victory.”

Lennox Lehmann (Freudenberg KTM – Paligo Racing) recovered from starting 25th to finish 3rd, claiming his first WorldSSP300 podium: “It’s a perfect start of the season even though the Superpole was quite bad with 25th position. We knew we had a good pace for the weekend, but we were not expecting to be that good to fight for a podium. From the start, the KTM was quite good, I recovered five positions from the start and again more positions on the straight. I think tomorrow it’s possible to fight again for the podium, if there is a big group fighting.”

Victor Steeman (MTM Kawasaki) finished in fourth for Kawasaki while his teammate at MTM Kawasaki, Yuta Okaya, was fifth just a tenth behind. Inigo Iglesias (SMW Racing) completed the top six despite running in the lead group before his Long Lap Penalty.

#AragonWorldSBK
Get All Our Latest News Sent Direct To Your Inbox
Join 30,253 other subscribers.
Follow on Social Media
Get the VROOM Podcast
Download our Vroom.GP App