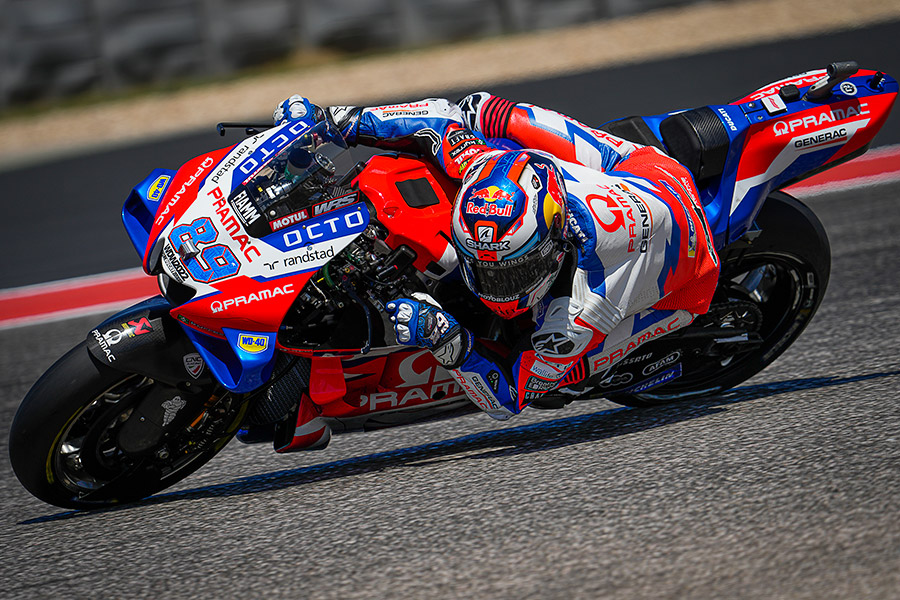 Jorge Martin’s (Pramac Racing) stunning Saturday afternoon form continued at the Red Bull Grand Prix of the Americas, with the Spaniard coming through Q1 to claim a sensational second pole position of the season. It’s four front row starts in a row for Martin too, with the Spaniard beating Jack Miller (Ducati Lenovo Team) by just 0.003s this time around. The 2:02.039 the Pramac rider set is also a new all-time lap record.

Francesco Bagnaia (Ducati Lenovo Team) claimed P3 to make it a Ducati triple threat on the front row and, just behind, two more Ducatis line up P4 and P5… making it the first ever front five lockout for the factory, and the first for a single manufacturer since Honda in 2003 at Motegi.

Q1
Q1 was – as we’re used to seeing given the sheer competitiveness of the class – a star-studded affair. World Championship leader Aleix Espargaro and Aprilia Racing teammate Maverick Viñales fancied their chances of progressing, but so did Alex Rins (Team Suzuki Ecstar), Martin and Franco Morbidelli (Monster Energy Yamaha MotoGP™).

Rins was the early pacesetter, the Suzuki rider putting in a 2:02.723 as the benchmark. Martin soon took over at the summit with eight minutes to go though, which saw Aleix Espargaro kicked out of the all-important top two. Then, chasing a time on his second run, the number 41 was down. Hopes of a Q2 place were gone for the Spaniard and the best he could hope for was a P13 grid slot. Luckily, P3 in the session and P13 on the grid was where he stayed, as Martin and Rins progressed and no one else could leapfrog.

Q2
Q2 then got underway and it was Miller who was the early pacesetter, with fellow Ducati rider Enea Bastianini (Gresini Racing MotoGP™) off to a tougher start as he crashed at Turn 15. The Italian was able to pick his GP21 straight back up though, and immediately set off chasing a pole position lap time – no damage done.

Then, another crash. This time it was Fabio Quartararo (Monster Energy Yamaha MotoGP™) at the penultimate corner. Rider ok and 100m Olympic sprint mode activated, but it was now a race against time for the Frenchman who was provisional P7.

After that and at the end of the first set of runs, Miller was leading Bagnaia by 0.008s, with Martin and Bastianini making it a Ducati 1-2-3-4. Quartararo managed to make his way back to the garage with just over four minutes to go though and straight away, the number 20 was back on track on his second YZR-M1.

Pecco came out of the blocks flying on his second fresh soft rear tyre. 0.140s was his advantage through the third split and by the line, the number 63 went top by 0.160s over teammate Miller. The latter, though, was also setting red sector times. Through the third split, Miller was 0.236s up on Pecco’s effort and sure enough, the Australian returned to P1.

Then, there was another Ducati rider lighting up the timing screens – Martin. The qualifying specialist lost time in the third split but a wonderful fourth sector saw Martin pip Miller by the slimmest of margins: just 0.003s. Was there anyone else challenging? Not by the looks of it. Quartararo was struggling to respond, seven-time Texas winner Marc Marquez (Repsol Honda Team) had a quiet session pushed down to P9 and Rins and 2020 Champion Joan Mir (Team Suzuki Ecstar) jumped up to P7 and P8.

In the end, Martin’s 0.003s advantage was enough to take it, with Miler and Pecco joining him on the front row. Johann Zarco (Pramac Racing) and Bastianini, in P4 and P5, made it a historic Ducati demolition on Saturday in Texas.

The Grid
Behind the five Ducatis is Quartararo lining up in P6. How much did that crash affect the reigning World Champion’s pole position hunt? He’ll want more on Sunday.

Rins and Mir head up the third row ahead of Marc Marquez, the eight-time World Champion under the radar so far. Fellow Honda rider Takaaki Nakagami (LCR Honda Idemitsu) rounded out the top 10 to equal his best of the season so far, with Argentina front row hero Luca Marini (Mooney VR46 Racing Team) and an under the weather Pol Espargaro (Repsol Honda Team) just behind, set to launch from P11 and P12 respectively.

An American, riding for an American team, in America, on pole! That sounds good for the home crowd, doesn’t it? It certainly does for Cameron Beaubier (American Racing) who bagged a dream debut Moto2™ pole position at the Red Bull Grand Prix of The Americas, taking the honour by over 0.3s from Championship leader Celestino Vietti (Mooney VR46 Racing Team). Vietti came through Q1 to start on the front row, however, and it’s a familiar sparring partner in P3: Aron Canet (Flexbox HP40), despite a late crash, starts from third.

Q1
After finishing Free Practice down in P15, Vietti had to battle it out in Q1. The Italian didn’t top the first part of qualifying either, that accolade went to Bo Bendsneyder (Pertamina Mandalika SAG Team), but he safely made it into the pole position shootout alongside the Dutchman, Marcos Ramirez (MV Agusta Forward Racing) and Jeremy Alcoba (Liqui Moly Intact GP).

Q2
After the first set of laps were thrown into the hat in Q2, it was none other than Vietti leading the way, the Italian putting in a 2:09.091. Augusto Fernandez (Red Bull KTM Ajo) then crashed unhurt at Turn 17 though, bringing out the red flags, as Tony Arbolino (Elf Marc VDS Racing Team) then went down unhurt at Turn 8. Neither rider had set a lap time. Ai Ogura (Idemitsu Honda Team Asia), who was P3, was then the third rider who crashed, rider also ok. The Japanese rider went down on the exit of Turn 11 and that meant more yellow flags were shown, which meant more laps would be chalked off.

After the drama had settled, all eyes turned to Beaubier. Three red splits went the way of the home hero and crossing the line, the American went provisional pole by 0.3s.

Canet was on a flyer though, over four tenths up in the first sector, but Turn 17 caught the Spaniard out. The front end washed away, bringing out the yellow flags once more, but it wasn’t quite done and dusted yet with a couple of minutes to go…

Fermin Aldeguer (MB Conveyors Speed Up) and Arbolino were out on track and threatening, but ultimately neither would get close to Beaubier’s time. That was that – the American sophomore is on pole for the Grand Prix of the Americas!

The Grid
Behind Beaubier, Vietti and Canet, Arbolino managed to recover from that early crash to claim P4 on his last lap. The Italian will start alongside Shimoko GASGAS Aspar Team pairing Albert Arenas and Jake Dixon.

Q1
Joining the fray in the Q2 shootout from Q1 were Artigas, who took over late on and denied Scott Ogden (VisionTrack Racing Team) the honours of topping the session. They were joined by Stefano Nepa (Angeluss MTA Team) and Elia Bartolini (QJMotor Avintia Racing Team) as the fight for pole got underway.

Q2
Guevara set the early pace with a 2:16.609 as Foggia sat P9 after his first effort, but the times would tumble on the next set of flying times. Migno then took over by 0.127s from Deniz Öncü (Red Bull KTM Tech3), with Foggia climbing to P4 with six and a half minutes to go. As he always tries to do, the 2021 runner-up was lapping alone…

On his fifth flying lap, having not pitted for fresh rubber, Foggia pulled a phenomenal final sector out the hat and took provisional pole by 0.058s with just under two minutes to go. That was then 0.086s as Foggia improved again, but on their final laps, Migno and Artigas bettered the Italian. With one last shot at it, Foggia did improve once again but his last attempt wasn’t quite enough – Migno bagged pole by 0.067s ahead of the Leopard Racing rider.

The Grid
Behind Migno, Foggia and Artigas, Öncü will start from P4 in Austin with Jaume Masia (Red Bull KTM Ajo) and rookie Diogo Moreira (MT Helmets – MSI) joining the Turkish rider on the second row. Moreira is once again the top rookie.

Izan Guevara (Gaviota GASGAS Aspar Team), last year’s winner in Texas, completed the top 10, and teammate Garcia, the title leader and Argentina GP winner, has a mountain to climb from P15 on Sunday. Can the GASGAS guys move forward?