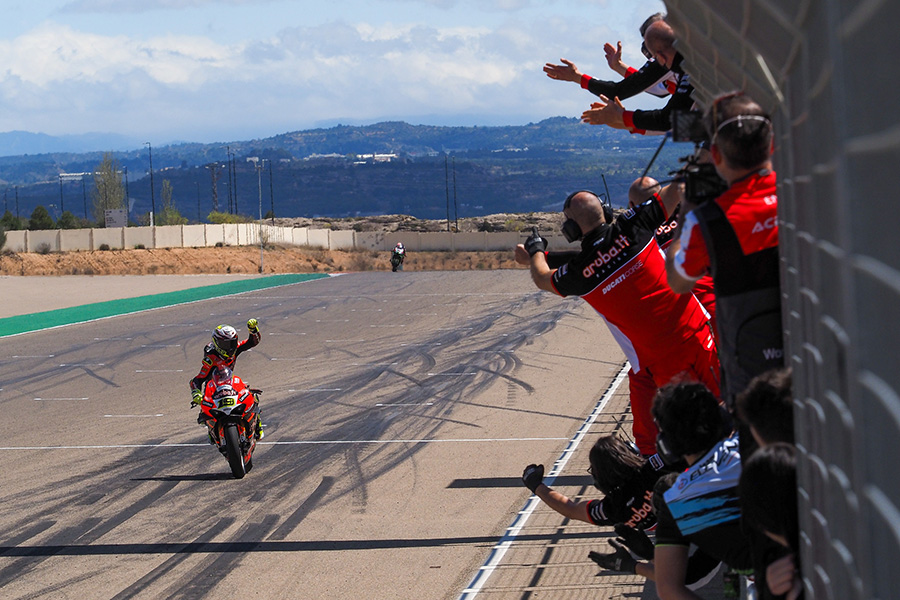 Alvaro Bautista (Aruba.it Racing – Ducati) claimed his second victory of the weekend, after having won the Tissot Superpole Race earlier on Sunday. He won by more than four seconds, despite his early fight with teammate Michael Ruben Rinaldi, Jonathan Rea (Kawasaki Racing Team WorldSBK) and Toprak Razgatlioglu (Pata Yamaha with Brixx WorldSBK). “This afternoon, the track conditions were different as it was much warmer. I needed to understand the limit under these conditions. I stayed consistent and managed to win again. I’m in love with this bike. I enjoyed a lot today,” he said. “It’s the best way to start the Championship!”

Jonathan Rea finished in second place, after battling with Rinaldi and Razgatlioglu. “I thought I could go to the front and do a great rhythm but straight away I knew it was going to be difficult to lead the race. Alvaro came through, his rhythm was really strong. It was a fun race with Toprak and Rinaldi, with lots of great moves. We started with a great weekend, a win and two second places. We move on to Assen!” said Rea.

Toprak Razgatlioglu could not catch up with Rea in the last part of the race, ending in third despite closing the gap in the latter stages. He said: “I saw that Rinaldi was sliding a lot, so I tried again my best to finish on the podium. With third position, we take great points for the Championship. I think that we’ll come back stronger for the next weekend.”

Rinaldi finished just outside the podium in fourth place, as Razgatlioglu overtook him with four laps remaining. “It’s my best WorldSBK season start. On the other hand, we were improving all weekend, but we always had the same issue. When the tyre drops, it’s like riding a completely different bike and I can’t push. I couldn’t turn the bike,” he explained.

Alex Lowes (Kawasaki Racing Team WorldSBK) finished in fifth place as he bounced back from his Race 1 crash to claim a top-five finish. “I tried to go with the guys at the front. But I was missing two or three tenths to be there consistently, especially from lap 5 to lap 12. I could enjoy riding the bike the last part of the race” Lowes explains. “It’s never easy to win, to get on the podium. We’re not too far away. That’s my target to be mixing with them,” he added.

Lowes led top Independent rider Axel Bassani (Motocorsa Racing) in sixth place after the Italian made a good start to jump up the order as he looks to continue his form from 2021 where he impressed as a rookie. Loris Baz (Bonovo Action BMW) was the first BWM rider in seventh as he finished 0.865s clear of Spanish rookie Xavi Vierge (Team HRC); the lead Honda rider.

Alvaro Bautista leads the Championship standings for the first time since Misano in 2019, with 57 points. Jonathan Rea stands in second with 54 points while Reigning WorldSBK Champion Toprak Razgatlioglu is third with 39 points.

Dominique Aegerter (Ten Kate Racing Yamaha) claimed his first victory of the 2022 FIM Supersport World Championship. After a tough battle with Baldassarri, Aegerter took the win over the Italian and heads to Assen as the Championship leader. He said: “Today I tried to push from the beginning to create a small gap with other riders. Baldassarri was always behind me so I just tried to focus and not make any mistakes. He overtook me on the straight in the last lap, but I thought “not again” so I tried to push really in the last corner and I could overtake him in the inside. 25 points, we’re leading the Championship so it’s very nice. Ten Kate brought a very good package for this start of season.”

Lorenzo Baldassarri (Evan Bros. WorldSSP Yamaha Team) was denied a debut double, finishing in second place just 0.030s behind Aegerter. The Italian rookie said: “I was feeling more confident than yesterday. It was again a great battle with Dominique. He did a good job to overtake me in the inside, at the exit of the corner I tried to push. But I pushed too much and I was sliding so I missed the win by 0.030s.”

Nicolo Bulega (Aruba.it Racing WorldSSP Team) capitalised on Can Oncu’s (Kawasaki Puccetti Racing) retirement due to a technical issue in the last lap to claim third position, scoring Ducati’s first WorldSSP podium since 2007 and his first one in the category. He said: “It was difficult, but we did a great job with a new bike. I’m happy. We take this podium, don’t stop working because we still have things to improve. Let’s see what we can do next race.”

Glenn van Straalen (EAB Racing Team) crossed the finish line in fourth, having been overtaken by Bulega in the final part of the race. Niki Tuuli (MV Agusta Reparto Corse) took fifth position for MV Agusta, Jules Cluzel (GMT94 Yamaha) completed the top six. Yari Montella (Kawasaki Puccetti Racing) claimed seventh place in a strong result for the rookie after running as high in fourth in the early stages of the race. Starting from the back of the grid, Stefano Manzi (Dynavolt Triumph) managed to recover to finish in eighth place.

Aegerter and Baldassarri leaves MotorLand Aragon tied on points, having scored 25 points each this weekend. Bulega stands third in the Championship standings with 27 points.

Alvaro Diaz (Arco Motor University Team) claimed his first WorldSSP300 win by more than three seconds in Race 2. In the closing stages of the race, he managed to break free from the group fighting at the front. “I was fighting in the group in the first five laps, and three laps before the end, I managed to break away,” he explained.

Race 1’s winner Marc Garcia (Yamaha MS Racing) claimed second position in Race 2. “Today was completely different than yesterday with many riders trying to fight for top position. My pace was much slower than yesterday. It’s difficult to manage the last part of a race with so many riders,” he said.

Lennox Lehmann (Freudenberg KTM – Paligo Racing) scored his second podium finish this weekend after another spectacular recovery, as he started from 24th on the grid. “Our goal at the beginning of the weekend was to get some points and we did it with two podiums. Race 2 was more difficult for me. I couldn’t really overtake at the beginning on the straight. The last lap was especially great, I had a great feeling with the bike and could overtake two guys in the straight to finish third.”

Bruno Ieraci (Prodina Racing WorldSSP300) finished just outside the podium, missing it by just 0.035s, and a further 0.041s back from second place showing how competitive the field was in Race 2. Inigo Iglesias (SMW Racing) and Mirko Gennai (Team BrCorse) completed the top six in fifth and sixth places respectively.

Alvaro Diaz and Marc Garcia heads to Assen tied with 45 points each. Lennox Lehmann stands in third place in the Championship standings with 32 points claimed in Aragon.