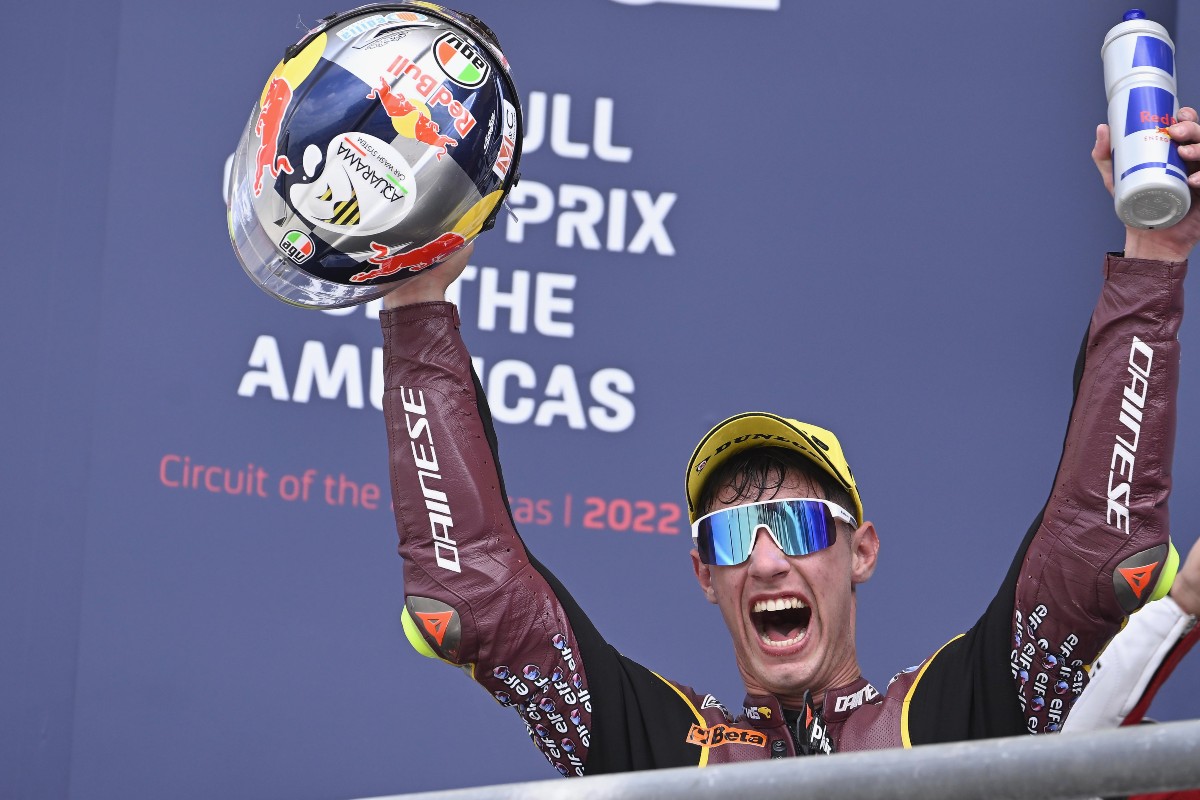 Tony Arbolino produced a flawless performance in Austin to take his first victory in the Moto2 class, while Sam Lowes suffered an unfortunate first lap fall.

With a revised running order for the fourth round of the season, Moto2 was the first race of the day at the Circuit of the Americas, and got underway at 11.20 local time.

Conditions for the 18-lap Moto2 race were cooler than what riders experienced in the majority of free practice sessions, with Elf Racing Marc VDS Racing Team riders Sam Lowes and Tony Arbolino dealing with track temperatures of 35 degrees.

After starting from fourth on the grid, Arbolino showed all the necessary aggression on the first lap, taking third place from Cameron Beaubier with a brilliant move at turn seven.

Crashes for Vietti and Aron Canet ahead meant the 21-year old’s excellent early efforts were rewarded. From there, he had to manage a 1.3s lead over Jake Dixon and Ai Ogura.

The 21-year old did that brilliantly, stretching his advantage to win by 3.4s. The result sees Tony climb to third in the championship with 54 points, 16 behind the leader.

Honestly what can I say? It’s an unbelievable thing! Hard work pays off and this is the result. It was an incredible winter of training and then testing with the team. I feel incredible and I want to say thanks to all my crew and all the people close to me. They’ve worked really hard. I tried to manage the distance in the first laps but I didn’t know if I was pushing too much or not enough. I was on the limit also. I thought if I went a bit slower, I could also win. This is what happened. It’s well deserved and I’m so happy. Let’s keep this going now for the rest of the season.

Seeking set-up improvements after qualifying ninth, Lowes had a strong start to the day and showed good consistency over a four-lap run in morning warm-up.

He started the race confidently, gaining a place in the first sector. But his afternoon was cruelly cut short on the first lap when he was taken out by another rider on the exit of turn twelve.

A luckless Sunday for Sam means stays sixth in the World Championship on 35 points, 35 off leader Celestino Vietti.

It’s a really disappointing race because I felt like we made a step forward. We made a big change ahead of the race and I was already feeling better than I was during most of the weekend. Our pace was quite strong. It wasn’t as far off as it looked. I’m just disappointed. It was a racing incident and it can happen. We now need to move on and get to Portimao and get some feeling and speed back. It’s frustrating but it happens. I’m a bit sore now. We need to take some time to recover so we can get to Portugal fit and healthy.