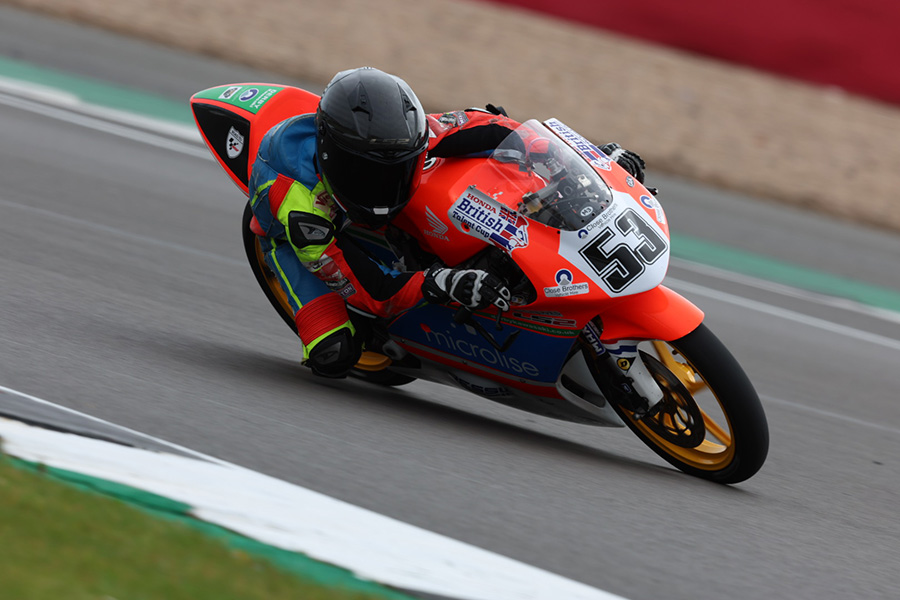 The first round of the 2022 Honda British Talent Cup has come to a close after Race 2 action from Silverstone in Northamptonshire, England. In another thrilling 22-lap encounter, it was a six-way fight for victory, with Kiyano Veijer (Microlise Cresswell Racing) holding on and avoiding last lap drama to take a career-first win ahead of Harrison Crosby (Banks Racing) and American Julian Correa (Microlise Cresswell Racing), whilst Race 1 winner Johnny Garness (MLav VisionTrack Academy) crashed out of the battle on the final lap.

Starting from pole, Carter Brown got a good getaway, but it was Race 1 winner Johnny Garness who grabbed the holeshot. Kiyano Veijer also made a bright start and was up into second from sixth on the grid; Veijer took the lead on Lap 2, holding on ahead of Garness, American Julian Correa (Microlise Cresswell Racing), Harrison Crosby (Banks Racing), polesitter Carter Brown (MLav VisionTrack Academy) and Rhys Stephenson (Rocket Racing), with the leading six being the main riders and in a group of their own. On Lap 6, it was Crosby who took over at the front, with Veijer and Race 1 winner Garness swapping places with the Banks Racing rider. At half-race distance, Carter Brown began coming back into the mix, in a similar pattern to Race 1, with the 2021 runner-up in third place as the top six had five seconds over the rest of the field, led by Harrison Mackay (Wilson Racing/Super Soco).

In the final five laps, it was anyone’s guess as to who would clinch victory; Veijer, Garness and Correa were the leading three, whilst Brown, Crosby and Stephenson were now keeping a watching brief with all six in contention. With half-a-second covering the leading six, Johnny Garness hit the front on the penultimate lap and attempted to break the group and led onto the final lap. Heading into Becketts on the final lap, Julian Correa came storming through from fifth to first, but teammate Kiyano Veijer blasted through on the backstraight, with Garness coming into second. However, in the braking area for Brooklands, Garness highsided out of the action, whilst on the exit of Brooklands, Rhys Stephenson likewise highsided, taking out Carter Brown. This left Dutchman Veijer out front ahead of Crosby, whilst across the line, it was Correa who bagged a first podium of the year.

With three of the leading six crashing out of the race in the final three corners, this promoted the second group right up the order. Fourth place went to rookie Clayon Edmunds (MJL Racing), ahead of Harrison Dessoy (Microlise Cresswell/Easterm Garage), Matthew Ruisbrocke (Microlise Cressewell Racing), Harrison Mackay, Harley McCabe (MLav VisionTrack Academy), Peter Willis (MLav VisionTrack Academy) and Ryan Hitchcock (City Lifting by RS Racing) all rounding out the top ten. Notably, it was a fine ride for Luca Hopkins (SP125/Barnsdale Leisure), up from last on the grid to 12th. In the Championship standings, Harrison Crosby sports a two-points lead over Veijer, whilst Garness is third, 15 behind.

The next round comes from Oulton Park from the 30th April to 2nd May, where the title fight promises to be just as intense as the opening round.

silverstone
Get All Our Latest News Sent Direct To Your Inbox
Join 30,271 other subscribers.
Follow on Social Media
Get the VROOM Podcast
Download our Vroom.GP App