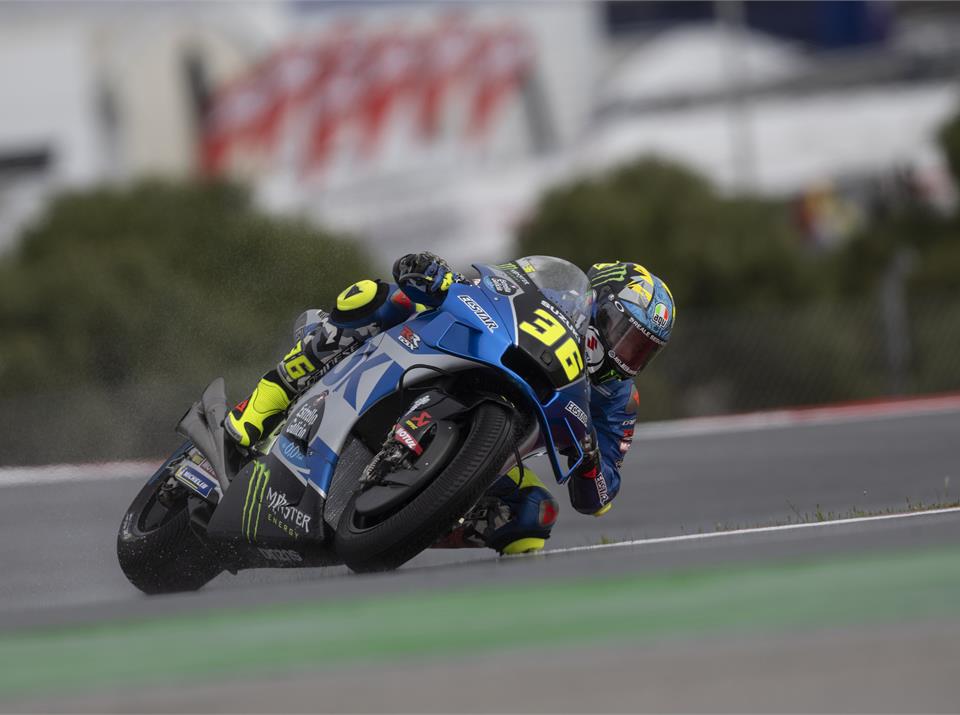 A rocky start to the Portuguese Grand Prix was turned around on Saturday afternoon when Joan Mir snatched a slick second place on the grid, and his best MotoGP™ qualifying position so far.

The riders found extreme conditions in FP3, with heavy rain and a chilly wind once again making time on track perilous. As the skies cleared and the session wore on, some improvements were possible during a short ‘sweet spot.’ However, by the time Alex Rins and Mir had prepared to put in some quicker laps, conditions had changed once again. Mir opted to stay safe as he was already in the Top 10, just exiting in the final moments to ‘scrub’ a set of tyres. Rins had a lap cancelled near the end of FP3 and realised no further improvements were possible, meaning he would need to fight in Q1.

The sun shone for FP4, but with plenty of standing water still hanging around the Autodromo Internacional do Algarve, care and caution would be necessary. Both Mir and Rins improved towards the end, but a lack of grip didn’t make matters easy.

Forced to try and get through Q1, Rins followed a good path when he improved on his early laps, but a quick pitstop to change to slick tyres proved costly as he had to come back in and return to full wets. Apart from this loss of time, luck was not on Rins’ side when, during a fast flying lap, he caught the yellow flags of a downed rider and lost his best lap. He will start tomorrow’s GP from 23rd on the grid.

In the final qualifying of the day the track was slippery and damp, but it was time to take a risk; Mir exited using soft-soft slicks – the first outing on slick tyres of the weekend for him. His times came down accordingly as he took huge chunks out of his previous personal best with each passing lap. Despite the worry of a yellow flag in the closing seconds, Mir’s pace and risk paid off as he went second.

“I’m happy to be on the front row, and it just goes to show how we’re improving and making steps all the time. I’m very pleased about this, because I know that when we make steps forward we don’t fall back again – we continue moving in the right direction. My confidence is growing, which I think was noticeable during qualifying when I took the risk to push for the front row despite the conditions. The front row is a great thing, but the fact that I have a good feeling with the bike is an even better thing.”

“I didn’t make the best decision in Q1 because I started on wets and then I decided to come in and switch to slicks, but when I was on the out-lap I suffered a lot and lost the rear many times, so I came in again. Because I went back into the box to change, I ran out of time and only had one fast lap left – that lap was under a yellow flag. It was a shame because my last flying lap was actually pretty fast, but it was cancelled of course. I was glad in the end though, because compared to yesterday my feeling was much better. I’m actually looking forward to the race and I’m quite optimistic, it won’t be easy from that grid spot, but I will be ready for it.”