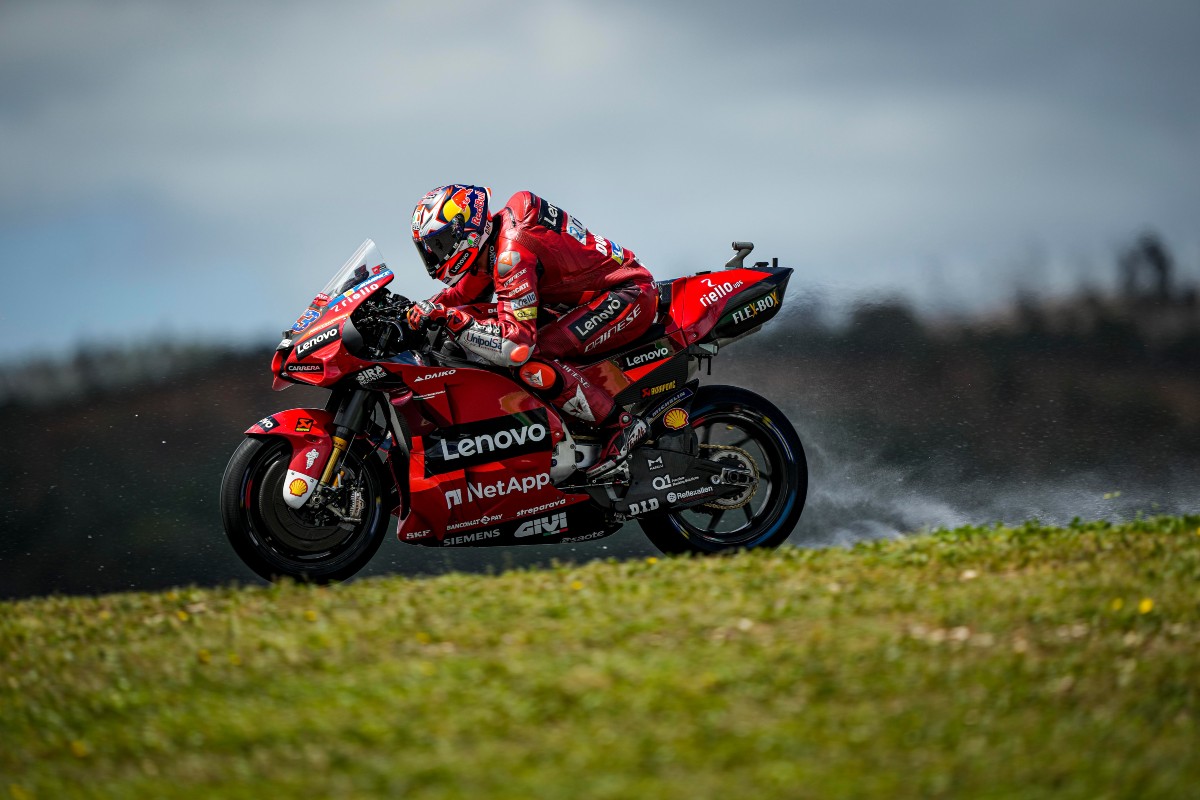 Jack Miller will start from the second row from the fourth position in tomorrow’s Portuguese GP at the Autodromo Internacional do Algarve, near Portimão. The Australian rider could secure a spot directly in Q2 by closing a damp FP3 in tenth place overall. In qualifying, mixed track conditions allowed riders to use slick tyres, and Miller immediately found himself at ease on the Desmosedici GP as he improved lap by lap to take the lead. However, towards the end of the session, he was overtaken by other riders and eventually finished fourth.

It was an unlucky qualifying instead for Pecco Bagnaia. The Italian rider, thirteenth after FP3, had to take part in Q1 this afternoon, which was also the weekend’s first session held under clear skies where the track began to dry. After a lap on “rain” tyres, Pecco returned to the pits to put on slicks but ran into a nasty crash after passing on a wet patch. Taken to the medical centre, he was immediately subjected to an X-ray that ruled out a fracture in his sore right shoulder. As a precaution, Bagnaia was taken to the hospital in Portimão for further tests, which fortunately confirmed the initial diagnosis. Tomorrow morning, before the warm-up, Pecco will be examined again by the Federation’s doctors to get the final clearance for the race, in which he will have to start from the last position on the grid.

Still, a Ducati bike will start from pole position tomorrow as Johann Zarco set the fastest time (1:42.003) with the Desmosedici GP of the Pramac Racing Team.

First job is done for the weekend as we did a good qualifying. With the slick tyres, I was able to be fast right from the start, but on the last lap, I made a mistake in turn 1, and I couldn’t improve further. Anyway, I am satisfied: fourth place and the second row are good places to start the race tomorrow. In the dry, the bike works well even though we haven’t had any dry sessions to work on it. If the conditions remain as they are, tomorrow morning’s warm-up will be crucial for the final touches before the race.

#PortugueseGP
Get All Our Latest News Sent Direct To Your Inbox
Join 30,246 other subscribers.
Follow on Social Media
Get the VROOM Podcast