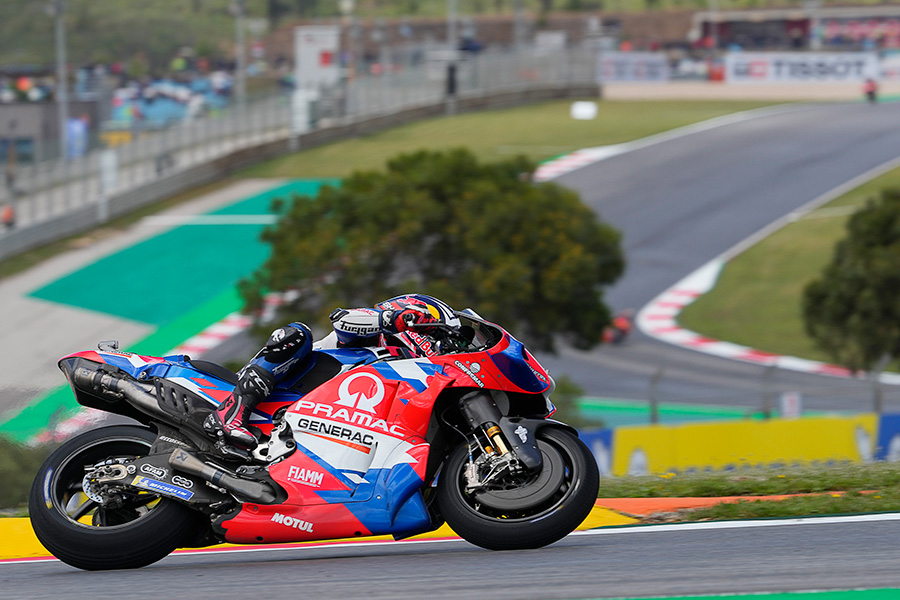 With great risk often comes great reward is an adage all 12 MotoGP™ riders in Q2 were following as they tackled a patchy Algarve International Circuit with slick tyres. In a thrilling final 30 seconds that saw four riders provisionally sitting at the top of the pile, pole position, in the end, went the way of the final man to cross the line: experienced Frenchman Johann Zarco. The Pramac Racing rider denied Team Suzuki Ecstar’s Joan Mir a debut MotoGP™ pole, with Aleix Espargaro (Aprilia Racing) then sneaked his way onto the front row just seconds after.

Q1
Q1 was was pure drama as the premier class riders rolled the dice with slick tyres on a partly-damp circuit. LCR Castrol Honda’s Alex Marquez was and Mooney VR46 Team’s Luca Marini timed their attacks perfectly to end the session first and second, booking their places in Q2 in some style. Jorge Martin (Pramac Racing), meanwhile, was the first to lost out – and the Spaniard lost his front row streak, now to start P13.

The headline stealers, though, were crashes for Ducati Lenovo Team’s Francesco Bagnaia and Gresini Racing’s Enea Bastianini as they both were caught out by damp patches. Bagnaia, who headed to hospital for precautionary checks after the crash, will line-up in last place, and Championship leader Bastianini, the number 23 quickly given the ok, finds himself down in P18.

The man just behind him in the standings, Team Suzuki Ecstar’s Alex Rins, lines up second to last after a topsy turvy and fascinating session in Portugal.

Q2
It was no surprise that the early pacesetting was done by the Q1 graduates Alex Marquez and Marini, as the pair put their knowledge of the conditions to brilliant use, the number especially seeming on rails. But as the other ten riders got up to speed and the track dried out further, the pace began to heat up. There were three minutes left when Zarco hit the top for the first time, but he was displaced just 30 seconds later by Mir.

With the clock now ticking down to just 90 seconds and the final flying laps lined up, Ducati Lenovo Team’s Jack Miller joined the party. The conditions were perfect for the Australian as he eyed a first pole position since Argentina 2018 in a similar situation, but then another rider who these conditions usually suit went red through the first sector.

Repsol Honda’s Marc Marquez was flying and on course to take provisional pole at the most opportune moment, before his teammate Pol Espargaro went down at the final corner, rider ok but bringing out the yellow flags. Marquez went fastest, with World Champion Fabio Quartararo (Monster Energy Yamaha MotoGP™) going second, but both laps were swiftly cancelled due to Espargaro’s off. And there was no time left.

That meant Miller still held pole but he was usurped, with the chequered flag now out, by Mir. The yellow flags were gone at the final corner and the 2020 World Champion capitalised, taking over on top. But his dreams of a career-first premier class pole were dashed within seconds as  Zarco’s final flying lap of a 1:42.003 proving good enough to pip the number 36 to the top. Still, second place remains Mir’s best-ever result in a MotoGP™ qualifying session.

The Grid
Despite sitting pretty at the top of the timesheets with the chequered flag out, Miller didn’t even manage to hold on to a front row spot with Aleix Espargaro sneaking third whilst all eyes were on Zarco’s charge for pole. The Australian will be joined on row two of the grid by reigning World Champion Fabio Quartararo, who recovered well from an early scare on a damp patch, and rookie Bezzecchi, who put a big smile on the face of his trackside team owner Valentino Rossi.

Despite doing the early running, Alex Marquez and Marini eventually slipped back to seventh and eighth, although for the former, despite already being a premier class podium finisher, it’s his best MotoGP™ qualifying result.

Marc Marquez, meanwhile, will feel he deserved more than ninth after that late lap cancellation, and he’s just ahead of teammate Pol Espargaro, whose last corner crash saw him end up tenth. It was a slightly underwhelming Saturday for Miguel Oliveira and Brad Binder (Red Bull KTM Factory Racing), and the duo will be looking for more on Sunday after seeming competitive all weekend.

FlexBox HP 40’s Aron Canet clinched his second Moto2™ pole in fine style as the intermediate class enjoyed a dry track for the first time at the Grande Premio Tissot de Portugal. The Spaniard’s 1:44.151 saw him take control of Q2 halfway through and, despite the best efforts of Cameron Beaubier (American Racing) and Jake Dixon (Autosolar GasGas Aspar Team) at the very end, he comfortably held on for a first pole since the 2020 Styrian GP.

Q1
COTA winner Tony Arbolino (Elf Marc VDS Racing) was one name looking for a way through, and he made it but was denied top honours by Marcos Ramirez (MV Agusta Forward Racing) by just 0.033. Joining the two, Jorge Navarro (Flexbox HP 40) and Zonta van den Goorbergh (RW Racing GP) headed for Q2 too.

Q2
Five minutes remained on the clock when Canet made his move for top spot, jumping ahead of victor last time out in Austin and Q1 graduate Arbolino. The chequered flag was out before anyone looked like challenging, but that challenge came courtesy of Beaubier. The American’s 1:44.479 fell short of Canet’s impressive lap but it was enough for another front row start just two weeks on from his emotional debut pole on home soil.

Dixon was throwing everything at it and couldn’t quite attack for pole but stole the final place on the front row, pushing Arbolino back to fourth.

There is a pair of Idemitsu Honda Team Asia machines at the front of row three with Ai Ogura and Somkiat Chantra set to fire from seventh and eighth on the grid. Ninth was Italtrans Racing’s Joe Roberts.

Row four of the grid for Sunday’s race will comprise Albert Arenas (Autosolar GasGas Aspar Team), Q1’s Navarro and Friday’s fastest in the wet, Marcel Schrötter (Liqui Moly Intact GP). That leaves Championship leader Celestino Vietti (Mooney Racing Team VR46) further back than he would like, with the Italian looking to move through from P13.

Red Bull KTM Tech3’s Deniz Öncü has taken a second career pole position after a stunning qualifying at the Grande Premio Tissot de Portugal, timing his final flying lap to perfection. Having come through a wet Q1 earlier, the Turk made the most of improving track conditions to take top spot as the chequered flag came out and, in doing so, denied both Mario Aji (Honda Team Asia) and Lorenzo Fellon (SIC58 Squadra Corse) debut poles.

Q1
Wet, and with a good number of fallers, Q1 threw up some surprises. That included some of the names in the session, with Championship leader Dennis Foggia (Leopard Racing) looking for a way through. He found one but he was second fastest, with Öncü topping the timesheets by half a second. Stefano Nepa (Angeluss MTA Team) was third quickest, with Josh Whatley (VisionTrack Racing Team) putting together an impressive performance to move through to Q2 for the first time.

Q2
Öncü, Aji and Fellon took turns at leading Q2 throughout the course of the damp 15-minute session, swapping and changing lap after lap. But it was VisionTrack Racing’s Scott Ogden who sat at the top of the timesheets as the clock ticked to zero. However, in double heartbreak, the Brit’s lap was cancelled for yellow flags and Öncü then went fastest with a 2:03.955.

Indonesia’s Aji looked to threaten Öncü for pole moments later, but he fell short by just 0.017 seconds and was forced to settle for a second front row start of his rookie season. The pair will be joined there by Frenchman Lorenzo Fellon, who clinched a debut front row start just two weeks on from his first World Championship points.

The Grid
Behind that front row, fronting Row 2 comes CFMoto PrüstelGP’s Carlos Tatay, followed by Leopard Racing’s Tatsuki Suzuki and Valresa GasGas Aspar’s Sergio Garcia. Garcia, sat second in the Championship and on pole in the 2021 Algarve GP,  salvaged a second row start despite crashing three times during Q2. It’s even his second best qualifying of the year.

SIC58 Squadra Corse’s Riccardo Rossi ended up seventh on the grid, over a second adrift of Öncü. The Italian will line-up one place ahead of Ogden, who, despite claiming a career-best result, will no doubt be frustrated after showcasing pace good enough for the front row. Joining the pair on row three will be Valresa GASGAS Aspar Team’s Izan Guevara, with Ayumu Sasaki (Sterilgarda Max Racing Team) completing the top ten – just ahead of former podium finishers at the track Andrea Migno (Rivacold Snipers Team) and Foggia, the Championship leader.