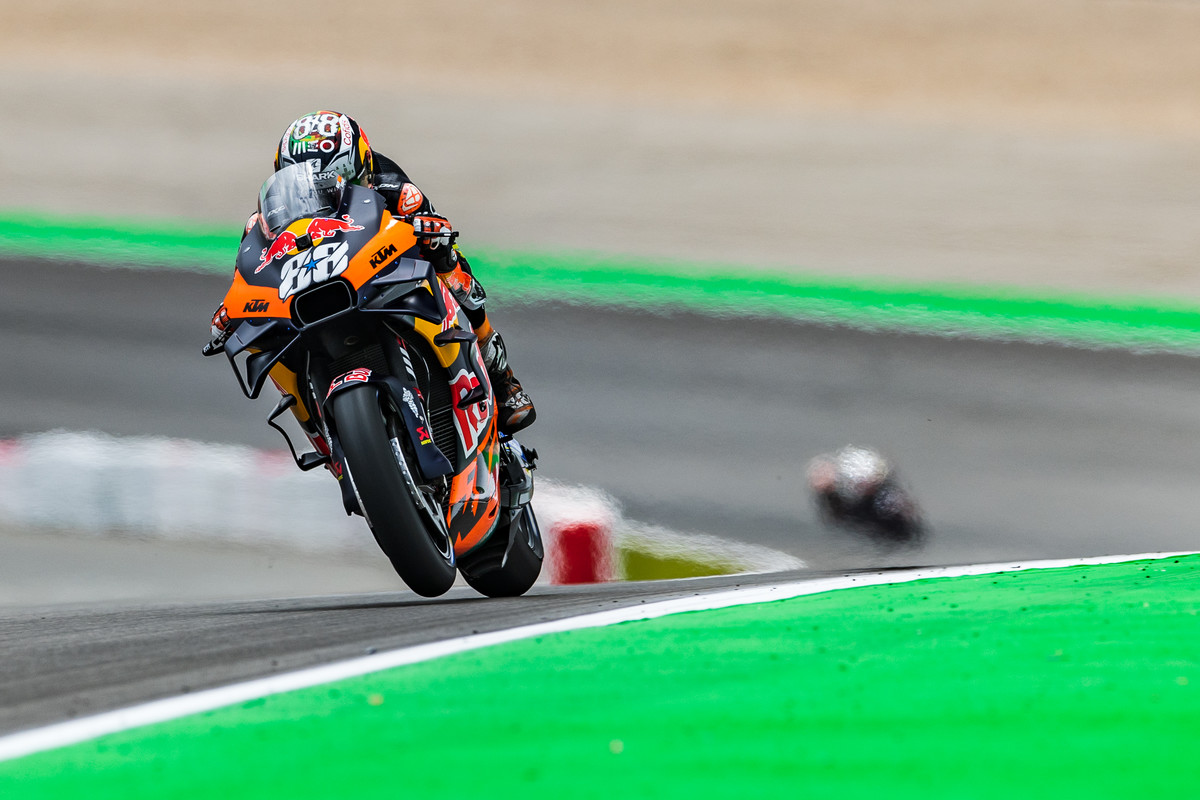 MotoGP flew around the splendidly flowing Algarve International Circuit for the fifth round of the world championship campaign and Red Bull KTM Factory Racing’s Miguel Oliveira owned 5th position by the end of 25 laps on Sunday afternoon.

Oliveira shone for KTM at the first European round of the season and in front of an eager and expectant crowd surrounding the circuit close to the coastal town of Portimao. The fourth Grand Prix at the undulating course was run in the dry after two days of a wet and stormy climate and with two RC16s blasting from the fourth row of the grid.

Oliveira charged into contention for the top six and was circulating just adrift of the lead group. The Portuguese benefitted from the unexpected crash between Joan Mir and Jack Miller and steered his way to 5th for 11 points. The classification pulls him up to 8th in the championship standings, right behind his teammate. Brad Binder charged through the pack to eye the top ten but crashed at mid-race distance.

The Gran Premio Red Bull de España takes place at its traditional home of the Circuito de Jerez – Angel Nieto next weekend and means only a short drive east for the MotoGP paddock ahead of round six in Andalucía.

Miguel Oliveira:
“We feel like we could have challenged for more today but we had a couple of difficulties during the race. I wasn’t too happy with our compound choice of the front tire. So, to take top five on a day when I was not so comfortable on track: we’ll take it. It is also a good base to build a positive mindset for Jerez and good motivation. It was a pleasure to ride in front of the home crowd and all the fans. I was happy to give them something with this 5th position.”

Brad Binder:
“It was nice to wake-up to sunshine and have a dry track to race on. Warm-up went reasonably well and I noticed a few things with the set-up but we didn’t really have time to work on it. I was battling in the race and fighting to get the bike stopped when I was behind people but started to find my groove. I was pushing-on but unfortunately got sucked into one of the corners too much and tucked the front. Sorry to the team for messing-up. This happens. We’ll move on, and Jerez is normally a great track for us.”

#PortugueseGP
Get All Our Latest News Sent Direct To Your Inbox
Join 30,246 other subscribers.
Follow on Social Media
Get the VROOM Podcast