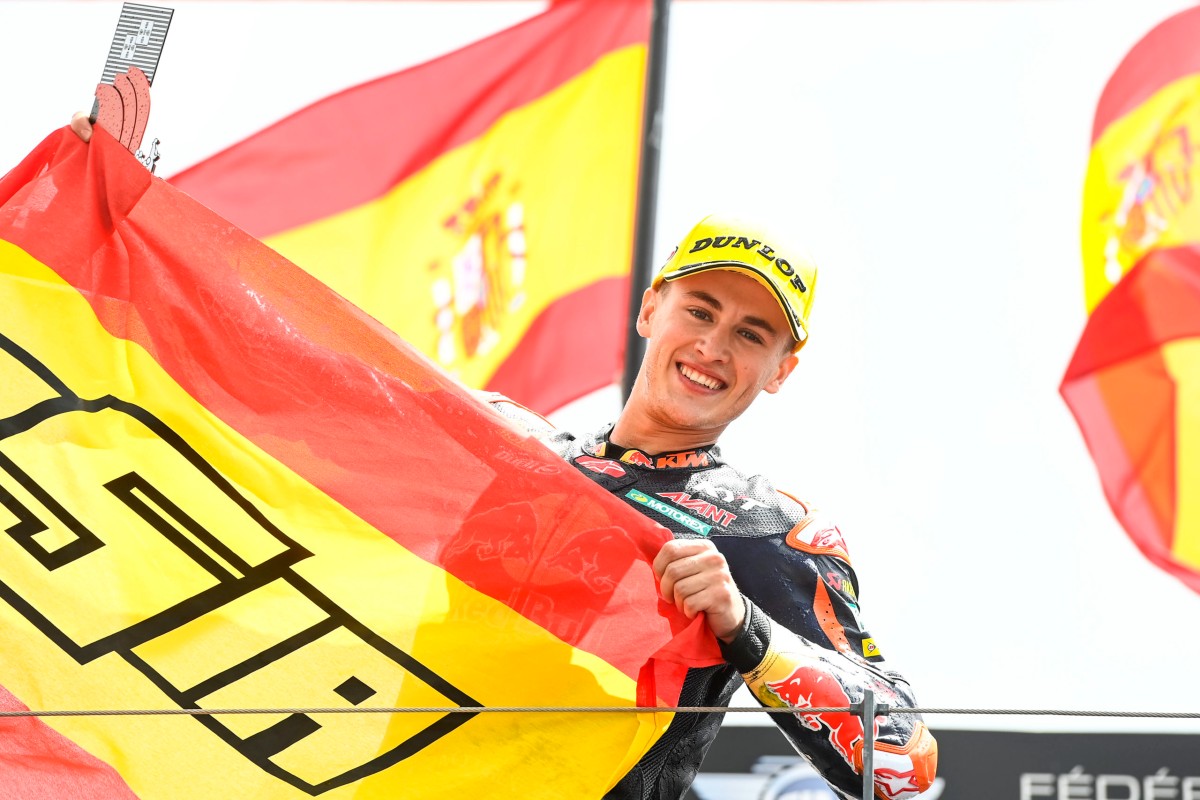 Red Bull KTM Ajo Moto3 and Jaume Masia were once again on the podium this weekend, with a second position for the Spaniard at the Portuguese Grand Prix. He moved up 13 places during the race, and battled until the last corner of an intense contest to take the 13th rostrum of his career. Dani Holgado suffered a crash midway through the race, when he was fighting for the top 6.

Masia set a strong pace from the start, despite beginning from the fifth row of the grid, and managed to join the leading group. Shortly afterwards, the pack was broken up, but he continued to climb positions until moving up to fourth on lap 8. The Red Bull KTM Ajo Moto3 rider then looked to hunt down the group in the fight for the podium which, in turn, caught up with the race leader. With 12 laps to go, an intense five-man fight for victory got underway, with Masia achieving a brilliant second position – just 69 tenths off the win.

Holgado, who started from the fifth row of the grid, held 13th place at the opening corner. The Red Bull KTM Ajo Moto3 rookie pushed to join the second group, where a large number of riders competed for the top 6. Holgado was enjoying a solid race, accumulating valuable experience, but a crash at turn 5 with 4 laps to go forced him to retire from the contest.

Masia is third in the Moto3 World Championship with 54 points, while Holgado is 14th with 16. The Red Bull KTM Ajo duo now travel to Jerez, where the Spanish Grand Prix will take place from April 29th to May 1st.

I’m very happy with second place today. The weekend was a bit tricky, because the conditions were very difficult; it was wet, windy and cold and I didn’t feel comfortable. In qualifying, it was tough for me and I didn’t manage to ride well, but we knew that in the dry we had the potential to go fast. I feel very good on the bike and we have a very consistent set-up. In the race, we tried to manage things as well as possible and we were just missing something on the last corner. I was able to fight for the victory, and I’m very satisfied because in the past we have not been lucky at this track – so I am very happy about the podium, the points and not having had any mishaps. I really want to continue in this way, because I have a lot of confidence in the team and in the bike, and at Jerez we will continue working.

In general, it has been a very positive weekend because we were fast in all of the sessions. The race was a bit difficult because it was the first day that we had ridden in the dry, and we did not have the best set-up for these conditions. We could finish in 6th position and we were fighting with other riders and that is the most positive thing to take from today. We still have a lot to learn, and little by little we will reach our goal. I want to apologise to the team for the crash we had three laps from the end, and thank them for their work this weekend.

#PortugueseGP
Get All Our Latest News Sent Direct To Your Inbox
Join 30,253 other subscribers.
Follow on Social Media
Get the VROOM Podcast
Download our Vroom.GP App