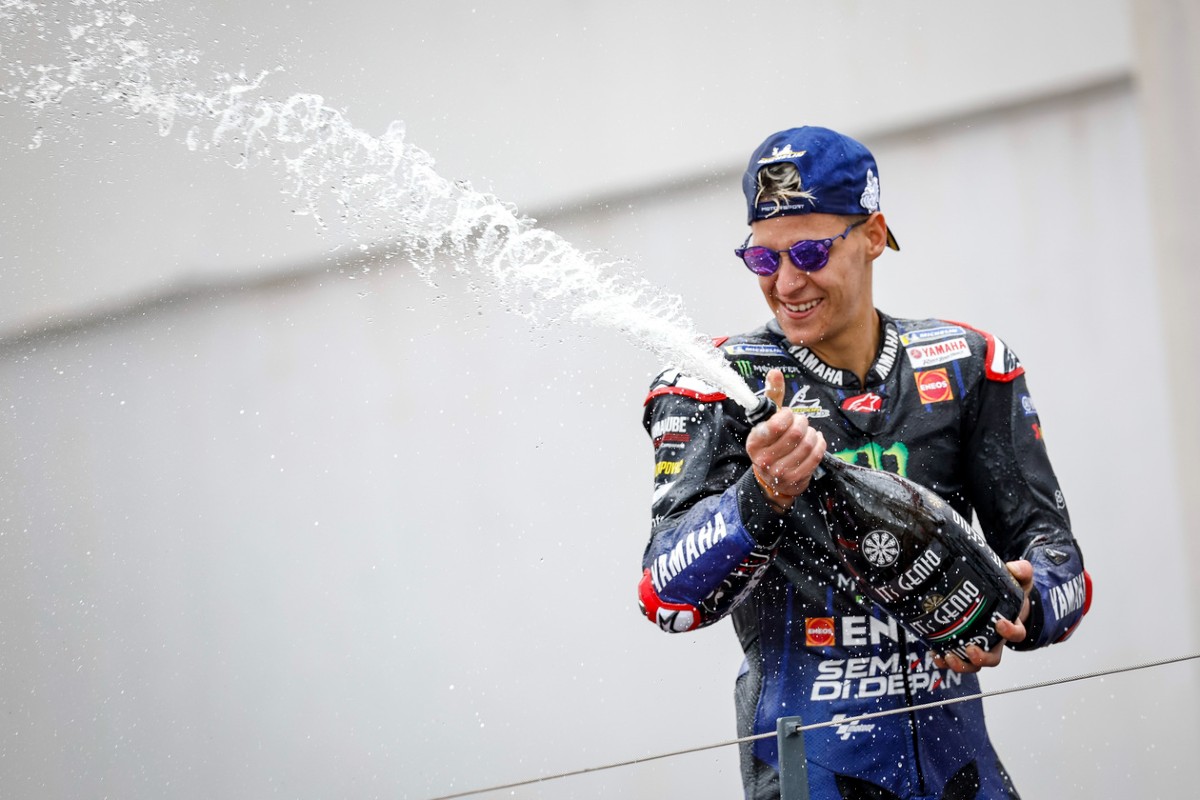 Monster Energy Yamaha MotoGP‘s Fabio Quartararo was in a league of his own today. The current World Champion showed his calibre, riding his Yamaha YZR-M1 to a faultless victory, with a 5.409s advantage over second place. The win puts him in the joint lead of the championship standings. Despite the chaos of the usual mid-pack opening laps, Franco Morbidelli rode from P19 on the grid to P13 across the finish line.

Grey clouds were looming above the Autódromo Internacional do Algarve before the start of the 25-lap MotoGP race, adding further tension to the preparatory activities on the grid.

Quartararo had a lightning start from P5 and followed it up with some brilliant lines in the opening corners to take second place. He had to put his head down to bridge the gap to Joan Mir who was 0.7s ahead of him after the first lap. It proved no problem for him and he powered past the race leader at the start of lap 4.

Soon the roles were reversed: it was the Yamaha man who broke away from the pack. With clear space ahead of him, he could focus on his own riding and put the hammer down. The gap was over 1s just two laps on. The remainder of the race was a lonely but very enjoyable ride for El Diablo. He set a new best race lap of 1‘39.495s, showing his muscles, and went on to cross the finish line with an impressive 5.409s advantage over second place.

Morbidelli had his work cut out for him, starting from P19 on grid. It was a difficult position to be in as all the 24 MotoGP riders dived into the first right hander, but the Italian used his experience to navigate his way through the first turns without any trouble. He completed the first lap in 20th place, before making a charge.

He recovered to 16th place, keen to score championship points, but then lost a position to Francesco Bagnaia. With two riders getting caught out by the windy conditions that made it easy to make a mistake, Morbido moved up to 15th place. He was preparing a second surge as late drama struck for other riders. The number-21 rider overtook Luca Marini and with several riders crashing out, he moved up to 11th place. He had to relinquish a position to Andrea Dovizioso and Marini towards the end of the race. He held thirteenth place as he took the chequered flag, 33.354s from first.

Today‘s results put Quartararo in joint first place in the championship standings with 69 points and Morbidelli in fifteenth with 17 points. After Round 5, Yamaha and the Monster Energy Yamaha MotoGP team move up to fourth place with 69 points in the Constructor championship and to third position with a 86 points total in the Team championship.

Monster Energy Yamaha MotoGP will be back in action next weekend for the Gran Premio de España at the Circuito de Jerez – Angel Nieto in Spain, from April 29-May 1.

I got this win by pushing myself to the limit. To be honest, I pushed just as much in Argentina and Austin, but mainly here our bike feels good. The straight is not so long, and we have grip, which means that we can go ’hammer time‘. Today, I felt amazing from the Warm Up on. In the race, I made an amazing start. I wanted to ride aggressively from the beginning, because I know that if we are behind our rivals here, we struggle. And we did it! I’m super happy, because I managed to get that first victory of the season. It’s the most important thing for me to never give up, and it turns out that really was the most important.

It was a tough race weekend because we needed time to improve our dry base setting. We had none before this morning. We had the chance to make a small adjustment from the Warm Up to the race. The bike felt a bit better than it did during Warm Up, but unfortunately we need to work more on these settings and have more experience with them, which we didn’t have this weekend. In the race I was braking early and not accelerating in the right way. I was slow.