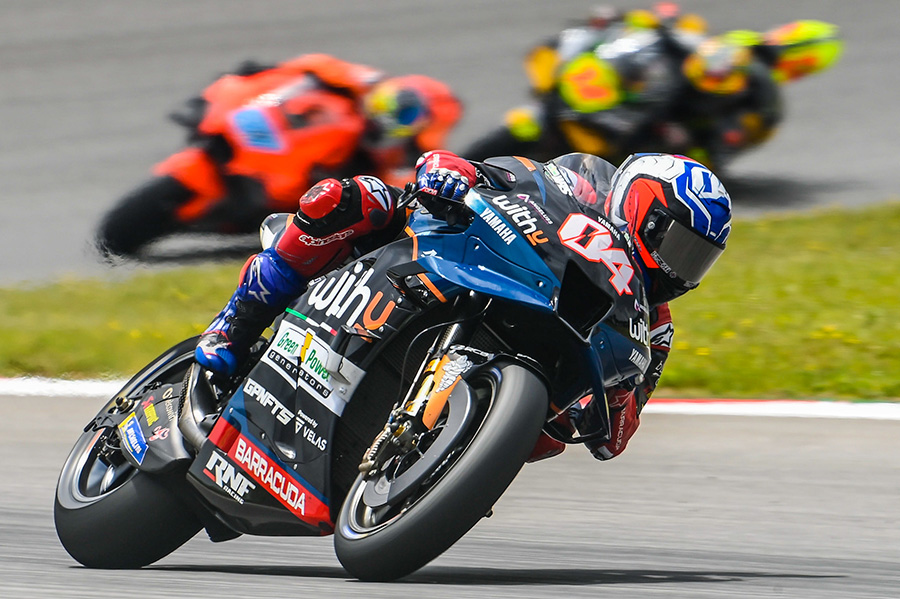 Following a wet Friday and Saturday, race day at the Autodromo Internacional do Algarve has been dry and cloudy. Therefore, all MotoGP riders had to try to get a feeling on slicks at the rollercoaster circuit in the Algarve in Warm Up this morning, a challenge for the entire field.

Andrea Dovizioso started the day with the ninth fastest time in Warm Up this morning and went into the fifth race of the 2022 season from row six of the grid. He was back in P18 after lap one, but started to make up ground, fighting up to the top 15 on lap five. Yet, he lost a lot of time in the last sector of the sixth round and went backwards to 19th position.

Trying his utmost, he managed to move forward again, benefitting from some crashes in front. After 25 laps, the Italian eventually saw the chequered flag in 11th, his best result so far this year, collecting five important World Championship points and second-best Yamaha behind eventual race winner Fabio Quartararo.

On the other side, the ‘rookie of the rookies’ Darryn Binder had a tough time getting used to the circuit aboard his Yamaha YZR-M1 in wet conditions and suddenly having to adapt to the layout on slicks. Yet, he did well keeping it up with his fellow MotoGP newcomers throughout all the race.

He kept his 22nd place from the start in the first few laps and made up positions due to contenders crashing, but still managed to keep his pace until the end of the race, crossing the line in a solid 17th. At the end of the first five races, the South African is still second in the rookies’ standings with six points on his account.

“At the end, we took some points. Relating to our speed, it was good, but overall, I’m not satisfied. On one hand, it’s interesting, because if you see my pace at the end of the race, it was quite good. The first half part of the race, when you have the grip, I’m not able to be faster and this is the point we need to work on. This is also the reason, why I’m not that fast in the practices and also why I lose a lot of time in the beginning of the race. When I was behind Maverick, he was starting to push and he was doing 1:40.5s. I couldn’t do lower than 1:40.7 and I did a mistake and went out of the track. At the end of the race, alone I was doing 1:40.2s. I don’t have the feeling and I don’t see how to use the bike at the beginning of the race. I think it’s good to have Jerez immediately and the test after the race, so we can work on that.”

“It was an ok race. Unfortunately, it has been a difficult weekend with all the rain and this morning we only had Warm Up as a dry session and I was really struggling in Warm Up. I was very slow. In the race, luckily I managed to find a bit of feeling. I went from doing 1:44s in Warm Up to doing 1:41s in the race, so I improved like three seconds. I managed to do all the race at a quite ok pace. Unfortunately, I really needed more dry laps on the big bike here to be able to make a step forward to stay with the other guys. I was with Di Giannantonio and we were catching Bezzecchi towards the end of the race, but when Di Giannantonio had a problem, I wasn’t able to close the gap to Bezzecchi on my own. I felt my references haven’t been good on my own. Overall, I made a good step forward from the Warm Up to the Race, but another session in the dry would have definitely helped.”