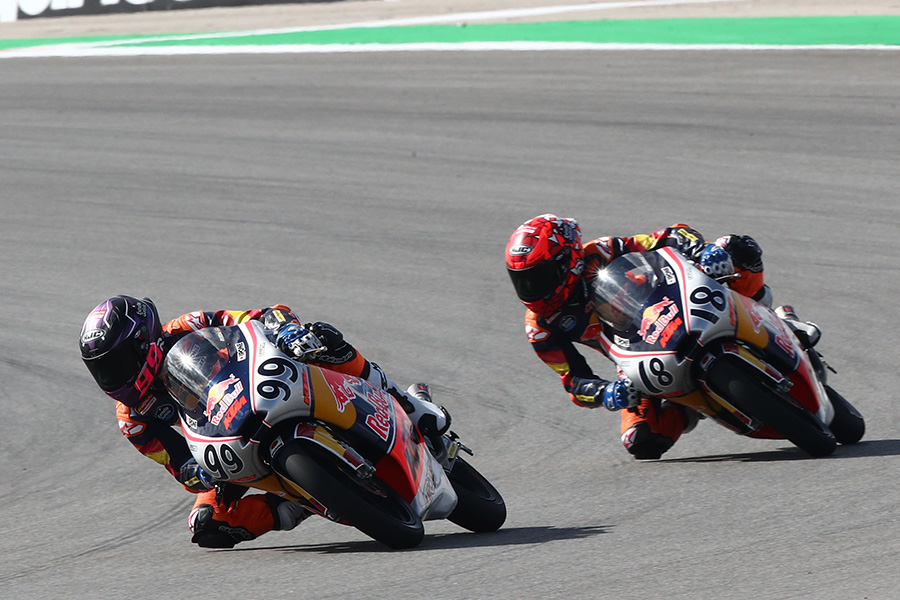 José Rueda rode a brilliant debut race to claim victory in the Red Bull MotoGP Rookies Cup at Portimão. The 16-year-old Spaniard seized an early lead and put in a near perfect ride. Fellow countryman Angel Piqueras hunted him down and the 15-year-old pole man was on his tail by the penultimate lap.

Piqueras had his sights on the win but a sudden change of direction saw the KTM RC 250 R snap sideways and he was off. Rueda was left to romp home with a 9 second advantage over Casey O’Gorman and Collin Veijer.

They were chased home by Harrison Voight, Tatchakorn Buasri and Gabin Planques after a thrilling race long battle with multiple place changes at every turn.

“I’m happy with the win and very happy with the bike. I really enjoyed the race. I pushed to get away in the front but then I knew that I was being caught. I did not know exactly how close he was on the second to last lap.”

“I am not sure how much more I could have pushed on the last lap to stay in front, it would have been difficult. Maybe I was on the maximum, I didn’t have to find out,” he added with a broad grin.

“The bike was really great. We will talk about it but I don’t think we need to change anything tomorrow.”

O’Gorman on the line

“All through the race I was battling with Collin and loads of others,” explained the 14-year-old Irishman. “There was like a group of 5 at every corner I’d get overtaken and I was overtaking. Then in the final lap, 2 people came past me into Turn 1 and I got pushed on some water. One of them nearly high-sided and I nearly hit him but I avoided it.”

“Then coming out of the last corner, I was going to try and slipstream Collin to the line, he missed a gear, he hit the rev limiter for a bit and I was able to get past.”

“The bike’s been perfect all through testing, I love the bike and don’t want to change anything for tomorrow.”

“I’m happy with that for sure,” enthused the 17-year-old Dutchman. “After some difficult times in the first two years of the Cup I’ve got on the podium so that’s a great start to the season.”

“In the first laps I felt that the grip was a bit lower than I expected. So when the race was stopped it gave the chance to ask the guys to adjust the suspension a bit and that seemed to help after the restart,” reported Veijer referring to the fact that the race was red flagged and restarted for a shortened 10 laps.

“By the end of the race the tyres were finished but I managed things quite well and in the last lap I could get into the lead of the group. I tried to push as much as I could but then coming out of the last corner I missed a gear, and Casey came past.“

“I’m happy with the podium, we’ll talk about the bike now and maybe try some small changes for tomorrow.”

Angel Piqueras falls from the challenge

Pole man Piqueras broke two toes in his right foot when he fell challenging Rueda for the win. “Yes, I cannot ride tomorrow, hopefully in Jerez. I am happy with my race, I just think this was unlucky. It slid when I changed gear and I could not hold it.”

After a lousy start from the middle of the front row the 14-year-old Spaniard cut his way through to the lead pack only to hit a fallen bike on the last lap. “Bad luck, I am happy because I had a lot of rhythm and next time will be better. I hope to do a better start and have the chance to make the podium.”

“It was the first time I have used the launch control, because in the test mine was broken. I couldn’t practice and now when I went to do it I didn’t do it well.”

“The bike was great though I felt very comfortable, from the bad start I could gain positions and I was really enjoying it.”