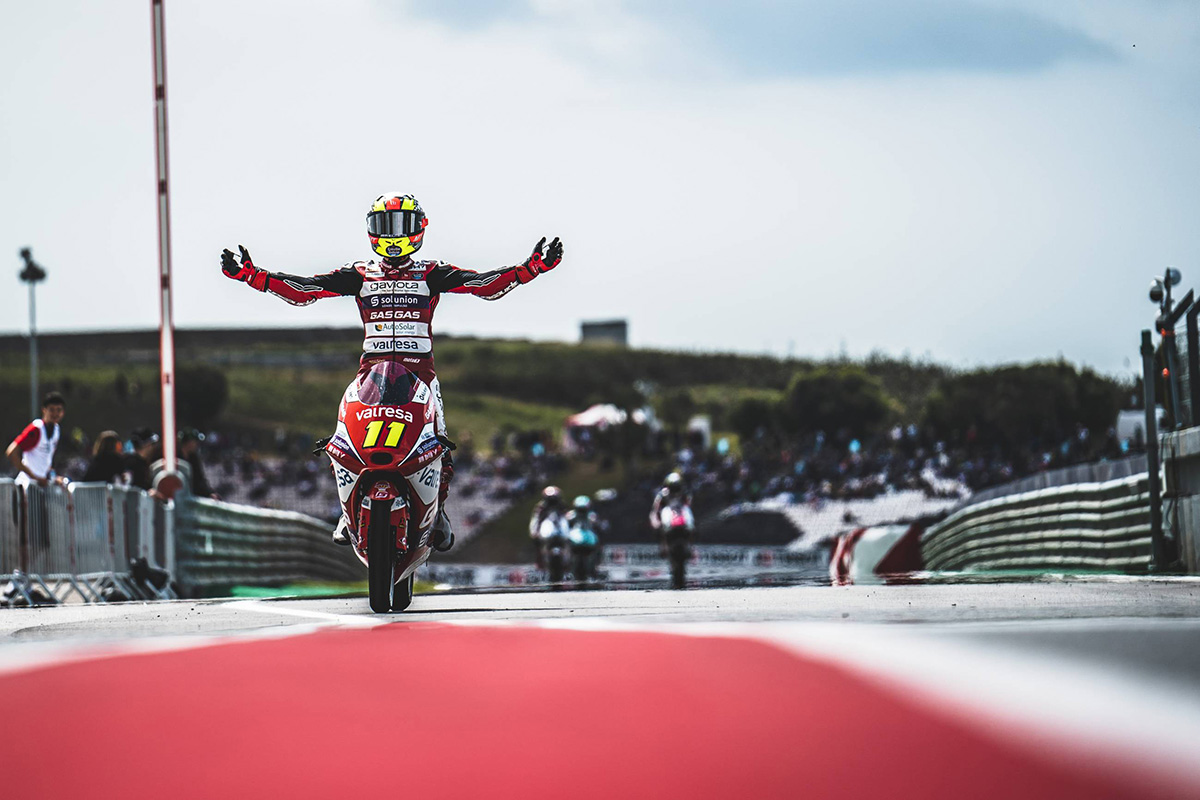 The Valresa GASGAS Aspar Team rider Sergio García Dols has shown his rivals his strenght in the Portuguese Grand Prix with his second victory of the season, which allows him to lead again the standings and also gives GASGAS the leadership of the constructors for the first time. García started from sixth position on the grid, but has made a sensational start that has allowed him to place second. García has led 15 of the 21 laps of the race, with a group of five riders that included his teammate Izan Guevara, Jaume Masiá, Deniz Öncü and Ayumu Sasaki. The Valresa GASGAS Aspar Team rider, one of the most experienced in the group, finally won by 69 thousandths over Masiá and 110 over Sasaki.

Guevara finished fifth in a race in which he started from ninth position, and in which he was able to fight with the best. With this result, the Spanish rider is sixth overall, 35 points behind his teammate after five races. David Alonso, the Aspar Team Junior rider who was riding as a wild card, also competed in Portugal today, and has fought in a beautiful battle alongside other rivals to finish 27th. The riders in the Moto3 category will travel directly to the Jerez – Ángel Nieto circuit, where the Spanish Grand Prix will be held next week.

WINNER Sergio García:
“I started very well and that allowed me to be second in the first corner. I saw that today I had something more than the others and I was able to shoot until Izan passed me. Then I focused in not losing positions and continuing to push. When I was in front, I could ride a little faster and I knew I could have an extra at the end of the race and that’s how it was. I pushed hard and I knew that in the last corner I was very strong. I had two races here having problems in turn 3, so winning here is very important. The team has worked very well, I have to thank them because the bike has performed very well today and we have to continue working for next week. It is important to regain the lead, but it’s time to think about the Jerez race.”

5th Izan Guevara:
“I felt good at the start of the race, although the ninth position on the grid hurt me a bit. In any case, we were in the leading group. I had Sergio almost two seconds in front, but I managed to catch up, working lap by lap. In the last few laps, I haven’t been able to push to the maximum, but I’m happy with the points from this fifth position, and now we have to fight in Jerez.”

29th David Alonso:
“It was the first dry day. In the race I started from behind, but the sensations were good and I enjoyed it much more than in Misano last year. I have fought with a group and I have learned things that I will be able to put into practice in the Junior GP races.”